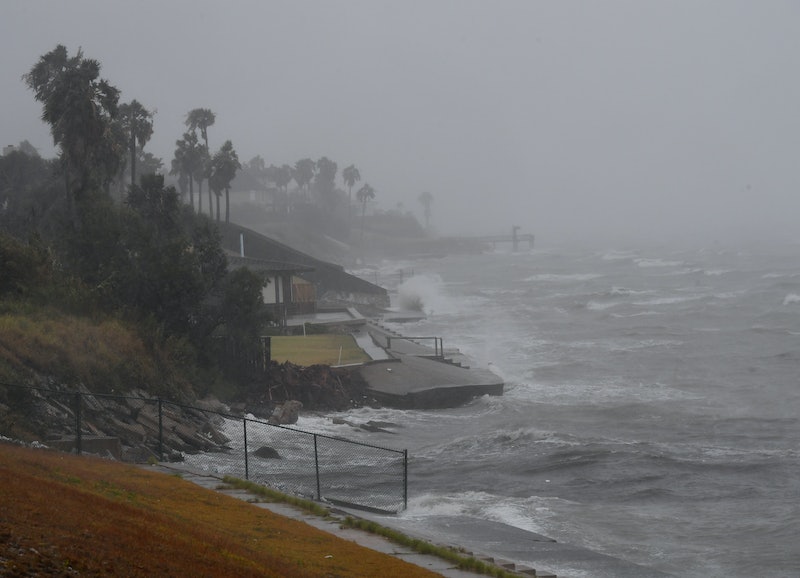 On Wednesday morning, the Category 5 Hurricane Irma made landfall in the Caribbean with maximum sustained winds reaching 185 mph. Irma comes less than a week after Hurricane Harvey made landfall in Texas, and on its heels are the newly formed Tropical Storms José and Katia in the Atlantic. (José is expected to build power and turn into a hurricane.) Given the sheer quantity of major in a short period of time, many might be wondering: why are there so many hurricanes in 2017? Is there a reason for this madness?

According to Jeff Masters, meteorologist and co-founder of Weather Underground, if Hurricane Irma hits the U.S as a Category 4 storm or higher (its currently a Category 5), it will break records. "The U.S. has never been hit, since we started collecting records in 1851, by two Category 4 or stronger hurricanes in the same season,” said Masters, “If Irma follows the current National Hurricane Center projection, that will happen."

Masters told PBS there are three main ingredients currently causing the uptick in hurricanes, the first one is weak wind shears. Basically, when coastal winds blow the opposite speed of winds in the upper atmosphere, it creates a speed gradient which then tilts and slows the velocity of a hurricane. Currently, shears are lower than average.

One of the other factors at play includes warmer ocean temperatures, which help fuel and intensify a storm. When Hurricane Harvey was approaching the Texas coast last week the Gulf ocean temperature rose 2.7 to 7.2 degrees Fahrenheit above average, further fueling the storm.

As of Tuesday, Hurricane Irma was brewing in sea that averages temperatures around 85 degrees Fahrenheit. According to the National Oceanic and Atmospheric Administration, surface water temperatures of 79 degrees Fahrenheit or above are conducive to hurricanes. So, the current ocean warming is a contributing factor.

The third and final culprit that Masters listed is the high level of moisture in the air. According to PBS, the air where Irma first brewed had 55 percent relative humidity, which Masters claimed was a bit on the dry side, but enough humidity to help a storm grow.

While there's expectations that climate change will continue to intensify the winds and rainfalls of tropical storms, Masters said the language for classifying storms will likely stay the same. "There never will be a Category 6 on the Saffir–Simpson scale," Masters said, "because Category 5 is already catastrophic."

More like this
Storm Reid Is A Morning Routine Girlie
By Carolyn Steber
Every Season Of 'Love Island' Ranked Best To Worst
By Alice Broster, Frances Stewart and Sophie McEvoy
How To Help Those Affected By The Turkey-Syria Earthquake
By El Hunt
Here’s Where The NHS Nurses’ Strike Currently Stands
By Sophie McEvoy
Get Even More From Bustle — Sign Up For The Newsletter
From hair trends to relationship advice, our daily newsletter has everything you need to sound like a person who’s on TikTok, even if you aren’t.