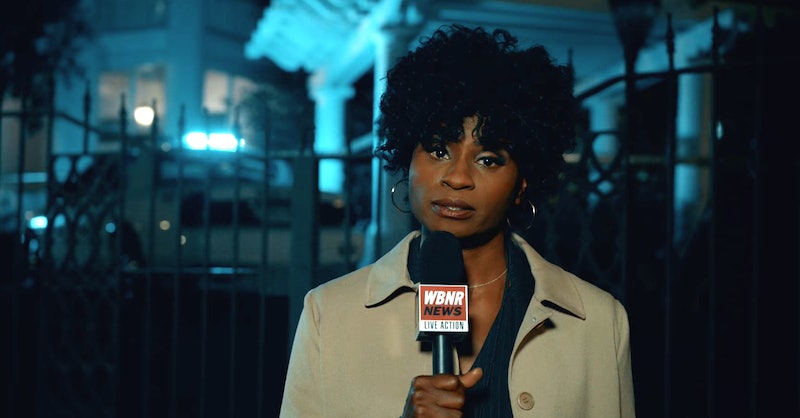 After becoming the surprising star of Season 6's Roanoke, Adina Porter is back at it again in American Horror Story: Cult. Spoilers for Episode 5 of AHS: Cult follow. During the episode, "Holes," Porter's reporter character Beverly Hope takes more of a leadership position in Kai's cult, even seeming to take some of his power from him at the end. While Porter is a busy TV actor, as she has appeared on True Blood, The Newsroom, and Underground (along with AHS: Murder House before Roanoke) and currently works on The 100 and Ray Donovan, she says in a phone interview with Bustle that Beverly is the "most rewarding role" she has ever played. And although she can't give away what's to come for Beverly as AHS continues to air on FX on Tuesdays at 10 p.m., it's easy to understand after "Holes" why the actor feels such an affinity for her morally compromised and ambitious reporter character.

"I love playing people that you don't necessarily like, but there's something about them that you still kinda wanna root for them, or tune in, or see how they kill somebody," Porter says. "I think [Beverly] might be my favorite character that I've ever played in my entire life quite honestly."

While Evan Peters' Kai is the leader and creator of the Michigan cult at the center of Season 7, Beverly appears to be his righthand woman. She has never been treated with respect by her boss Bob Thompson (Dermot Mulroney), so Kai lures her into his cult by promising to fulfill Beverly's request of giving her equal power in his group.

"She asked for equal power," Porter says. "She talked before about how too many promises had not been fulfilled, so she was only going to move forward if she felt that he was going to treat her as an equal. And so I think that's why I — or Beverly — decide to trust Kai cause he proved himself in Episode 4."

In Episode 4, "11/9," Kai had his killer clowns murder Beverly's work rival Serena Belinda (Emma Roberts), which prompted her to join the cult and help spread Kai's message of fear through her reporting. With "Holes," Beverly has risen swiftly through the ranks and by the end of the episode, she has Kai weeping about his family's sordid history. So does that mean Beverly has the power over Kai now?

"Everyone with Kai is playing chess and so you think you might be on top and then you're not too sure. So it's always just a chess match and minute by minute, hour by hour you kind of see who's on top," Porter says. "Or maybe it's like great sex. And like, sometimes you're on top, sometimes he's on top," she adds with a laugh.

Porter's comments make it seem that Beverly may not be as in control of the situation as she thinks she is, but that's all the actor can say. Yet, Porter does add that she has enjoyed working with Peters more this season. "I'm really glad I got a chance to work with Evan more this year than I did last year," Porter says. In Roanoke, Peters had the relatively small role of Rory, who was the actor who played Edward Philippe Mott in the reenactments. "Last year I remember saying to him I was intimidated by him," Porter says. "Because of the role that he played, he was cutting up on stage, he was making lots of jokes, he was kind of changing the lines around a lot. And me being still very much a newcomer, I was very intimated by this guy who felt like he just owned the stage."

However, Porter notes that Peters' demeanor was different while filming Cult. "This year, he had his headphones on a lot. He had his eating regimen. Boyfriend was focused," she says. "He didn't sit with the rest of us to chat and everything before we go in front of the cameras. He was going over his lines and what he had to do and so it was very easy for me to not even remember the young man who was Sarah Paulson's love interest and running around and making jokes and being carefree because this season, he was like [Laurence] Olivier." And Porter says his behavior encouraged her to be just as focused in her role.

As for working with Paulson again, it seems that Beverly and Ally may eventually share some scenes in Cult. Porter says, "A few times, like at 3 o'clock in the morning when we're nowhere near wrapping, Sarah and I will look at each other and go, 'Well, at least we're not in the woods,'" referring to their time together on Roanoke.

Although Beverly feels valued by Kai right now in AHS: Cult, knowing American Horror Story and knowing that Kai is a cult leader means you should be expecting the other shoe to drop. Especially since showrunner Ryan Murphy revealed during a live discussion event at The New Yorker Festival on Oct. 7 that the female members of Kai's cult start to feel disregarded, which leads them to discover Valerie Solanas' "SCUM Manifesto" during Episode 7. (Lena Dunham will portray the real-life radical feminist.)

So even though Beverly is confident in her role in the cult right now, that probably won't continue to be the case and she might take some radical action. "As you'll see, it's like gymnastics what Beverly has to go through," Porter teases with a laugh. But while Beverly may be put through the wringer on AHS: Cult, Porter is apparently loving every minute of it.

More like this
On 'The Handmaid’s Tale,' Christine Ko Fights Back
By Gretchen Smail
Mike Flanagan Teases 'The Midnight Club' In This Exclusive, Creepy Clip
By Grace Wehniainen
24 Years Ago, 'Friends' Dropped Its Most Underrated Ross & Rachel Episode
By Grace Wehniainen
Gabby Petito’s Family Responded To The New Lifetime Movie About Her Final Days
By Grace Wehniainen
Get Even More From Bustle — Sign Up For The Newsletter