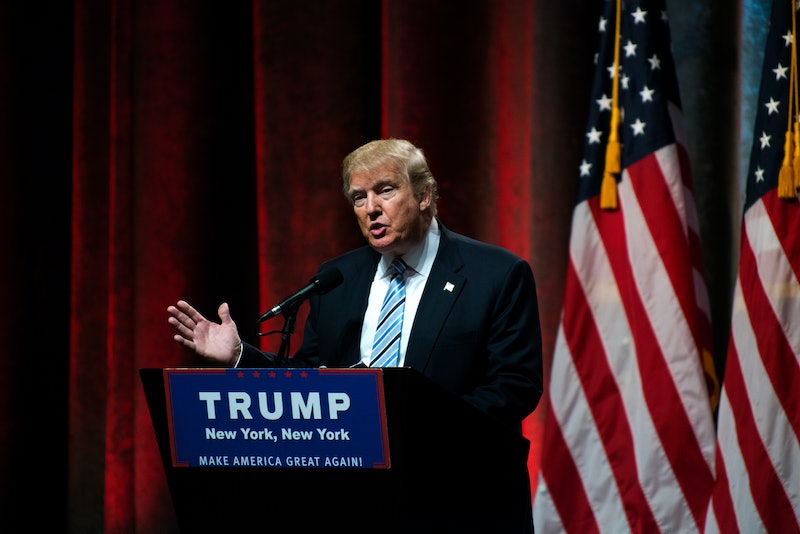 If you're a progressive, and you've ever tweeted anything remotely political on social media, you've probably received some pushback from supporters of President Trump. You also may have noticed some of them using less-than-stellar grammar as they declare, for instance, that "your in trumps America now." But as tempting as it may be, calling out Trump supporters' spelling on social media is not worth your time. In fact, it's counterproductive, and you shouldn't do it.

At some point, you may have wondered if Trump voters really do have notably bad grammar, or if it's just in your head. It isn't in your head. A 2015 analysis of comments left on presidential candidates' Facebook pages found that Trump supporters have the worst grammar of any partisans, making an average of 12.6 mistakes per 100 words. (Incidentally, the candidate whose supporters made the fewest grammatical errors was — drumroll, please — Lincoln Chafee.)

Whether this is sheer coincidence, a flawed study or evidence of Trump's support amongst uneducated Americans is irrelevant. If you see a Trump supporter displaying a grade school-level grasp of the English language on Twitter, don't call them out on it. Because while poor spelling is irritating to the eye, it's nowhere close to the worst offense of which Trump advocates are guilty.

Criticizing a random Trumpist for spelling "Obama" with two "m"s may be satisfying, but it's ultimately not a very scathing indictment. We all make spelling mistakes here and there. Moreover, while many Trump supporters may not know how to spell, that's not why Trump supporters are problematic.

The problem with Trump supporters is that they've voted for a demagogue who countenances racism, misogyny, political violence and authoritarianism.

Criticizing Trump voters for typing like grade schoolers hurts the anti-Trump cause, because it implies that Trump's greatest offense is having grammatically-disinclined supporters. That, in turn, distracts from all of the other terrible things about him, and the more legitimate criticisms of him and his presidency.

Of course, there's no harm in joking with your ideological comrades about Trump supporters' tenuous understanding of basic syntax. That's just good fun! But to bring it up in an actual political debate with a Trump supporter is to draw attention away from actual substantive criticisms of Trump. And given the very grave threats that Trump poses, that's a distraction we can't afford to create.