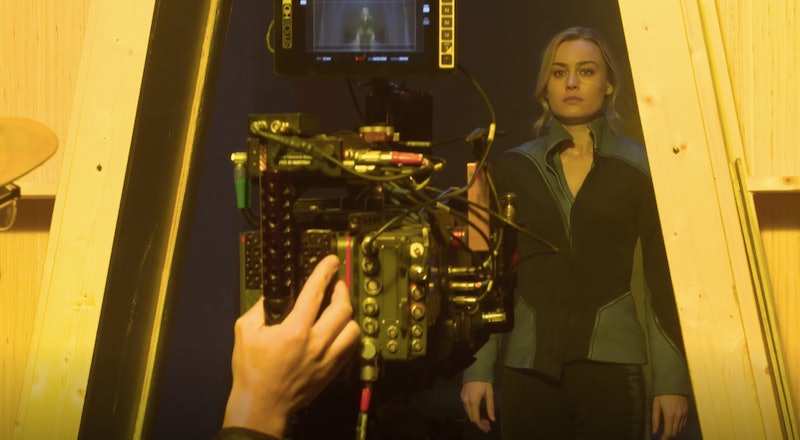 Nothing's been the same for Brie Larson since she officially joined the Marvel Cinematic Universe. Before teaming up with the rest of the gang in Avengers: Endgame, her Carol Danvers headed up her own standalone movie, Captain Marvel — a first for a female superhero in this franchise. And, yes, the actor thinks it's pretty cool, too. Larson wanted to make sure she did the role justice. In an exclusive featurette provided by Marvel Entertainment, she details all the best parts of playing — and basically being — Captain Marvel.

Take away the suit and the powers, the complexity and very core of Carol Danvers's character — her dual identity, which is explored in Captain Marvel — is part of what drew Larson to the role. "The thing about Carol is that she's Kree and she's human. She's always trying to figure out who she is," the actor says. Aside from the external and physical conflict, the battle going on in her own head with disruptive flashbacks and confusing memories is a huge driving force for the hero. "That internal struggle for her is what keeps playing her so interesting for me," Larson continues.

And though Larson's taken on plenty of interesting characters over the years, including her 2015 Academy Award-winning performance in Room, she believes that all her past work has been leading right do this. "My entire lifetime of experience is all coming through to come together to play this character right now at this period of time," she says. "I feel so grateful that they've given me the most dynamic character that I've ever had the chance to play."

Marvel Studios president Kevin Feige reveals that the first time Larson actually got into full superhero gear was on the set of Avengers: Infinity War, a movie in which she doesn't appear. "Seeing that character that we've been working on for years standing in front of you for the first time in real life, it's incredible," says Feige. And since that moment, it's been quite a ride for Larson.

At first, she didn't fully realize just how big of a deal playing Captain Marvel would be. "It's taken me a year on this journey. I don't think I fully understood the scope of it," she says. It wasn't until the film came out, and she saw the impact the MCU hero had on audiences — especially on young girls — that it truly dawned on her what it meant to portray her.

Another big bonus that comes with playing Carol? Hanging with the rest of the Avengers. "It's my chance to pick the brains of living legendary superheroes and ask the questions — questions that I wouldn't have answered by anyone other than the superheroes themselves," she says.

And it's great that the actor was able to get tips from the MCU's OG heroes. With the changing of the guard that was Endgame, Captain Marvel is set up to lead the new Avengers into the next era. "One of the highlights of my career at Marvel was introducing [Brie Larson] at Comic-Con and having her come out on stage and stand there with literally almost everybody else from our movies," Feige recalls in Captain Marvel: The Official Movie Special. "There she was at the forefront, and it was a great foreshadowing — not just for how audiences are going to embrace Brie as this character, but also for how Captain Marvel is about to take the lead and be at the forefront of the entire Cinematic Universe."

Captain Marvel is available on digital now and coming to Blu-ray on June 11.

More like this
Lin-Manuel Miranda & Tituss Burgess React To 'Little Mermaid' Casting Backlash
By Radhika Menon
The 50 Most Powerful Characters In The Marvel Universe, Ranked
By Johnny Brayson and Nola Pfau
Nicola Coughlan Shared A Lady Whistledown Excerpt From ‘Bridgerton’ Season 3
By Grace Wehniainen, Alyssa Lapid and Sam Ramsden
The 'Bachelor In Paradise' Schedule Shifts To 4 Hours Every Week After The Season 8 Premiere
By Brad Witter
Get Even More From Bustle — Sign Up For The Newsletter