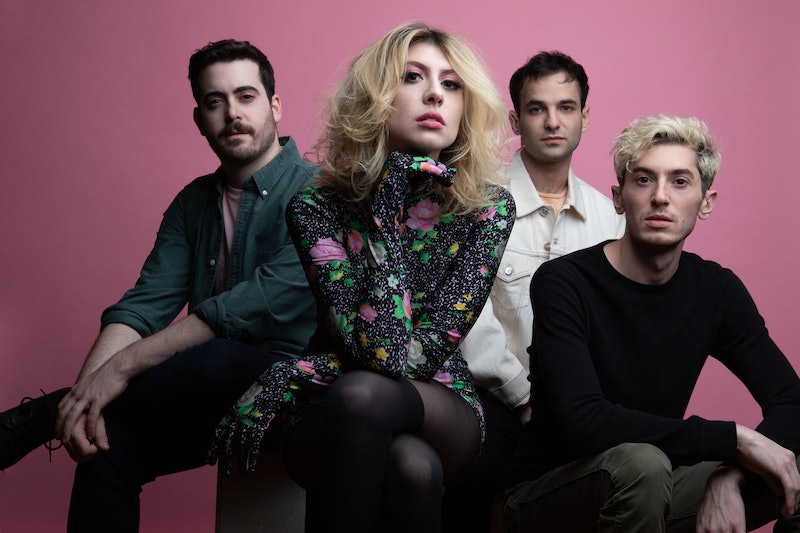 When working on power pop band Charly Bliss' new album, Young Enough, out May 10, lead vocalist and songwriter Eva Hendricks had a vital breakthrough. Although she had never shied away from writing about personal topics before — Charly Bliss’ 2017 debut album, Guppy, processed tough themes like death and anxiety — she decided that this time, she would revisit her own past tumultuous romances, in order to better understand her feelings.

“I had enough stability in my life that I could really look at [past relationships] deeper and more closely and get perspective on them that I wouldn't have otherwise been able to achieve," explains Hendricks, when we meet over drinks in her Queens neighborhood in early April.

That perspective is seen in songs like “Chatroom,” about a partner who allegedly sexually assaulted Hendricks. The track is upbeat, however, featuring affirmations about breaking free from abusive dynamics. “I think it is ultimately a joyful song,” says the singer. "This isn't necessarily dealing with what actually happened, it's about what it actually feels like to come out of the other end of something like that, and to have this breakthrough moment where you're purging bullsh*t from your life. That takes a lot of strength."

Yet while Hendricks considers "Chatroom" one of her favorite songs off the record — which was made with Charly Bliss members Sam Hendricks (drums), Dan Shure (bass), and Spencer Fox (guitar) — sharing something that personal wasn’t easy. “I worried about every possible issue when it came to talking about sexual assault on the album," she explains. "I barely slept and was extremely depressed leading up to 'Chatroom' coming out because I was so worried about anything that could have gone wrong."

That hesitation, Hendricks tells me, came from years of keeping what happened to herself as a form of protection, and instead blaming herself for ending the relationship — a common mindset for trauma survivors. “Your brain kind of immediately shelves it and says, ‘No, that didn't happen. OK, moving on, next thing!,'" the singer explains. Now that "Chatroom" is out, though, Hendricks says she feels freer, referring to speaking to press about the song as "ongoing therapy."

“Chatroom” isn’t the only song off Young Enough that tackles hard issues. On “Capacity”, Hendricks discusses the dangers of putting other people before yourself, explaining to me now that with her former boyfriend, she was more concerned with how her decisions affected his life than her own. “I was always worried like, ‘Oh, it might affect this one person in this one way,’ or, ‘What will this person think if I do this? Maybe I shouldn't do it,’ and that's a horrible way to live your life,” she reflects.

The album’s title track, meanwhile, addresses the power of leaving a bad romance and finding new, healthier love. “The song was... me saying, ‘You know what? That relationship wasn't perfect and I'm glad I'm not in it right now, I'm glad that I moved on from it, and I'm glad that I moved on from this idea that relationships should be really painful and that means something about how worth it they are,'" explains Hendricks.

In making the album, the singer says, she felt more confident in her songwriting than she ever had before. Back as a teen, Hendricks recalls, she had begun writing songs and was working singing jingles for commercials, but when asked if she wanted to contribute writing jingles, the answer was a vehement no. "I was like, ‘No, no way,’ [because] I've always thought, ‘I'm coming to this so late in the game, I don't really know what I'm doing,'" she explains now.

Yet once Charly Bliss formed and Guppy was released, gaining significant attention and leading the band to open for acts like Death Cab for Cutie and Sleater-Kinney, her mindset changed. "It forced me to stop diminishing myself and my abilities and really start to think of myself as a songwriter," says Hendricks. "There was a lot of power that came with that too, internally, admitting to myself when I'm someone who can't ever see myself usually in a positive way... that I was really good at something."

Hendricks is particularly proud of the band's song "Heaven," which landed a spot on the Chilling Adventures of Sabrina soundtrack for Season 2. “[When I got the news], I lost it. I was screaming. We were on the highway and I was like ‘Aaaah!’" she remembers. "To have it be on a show that I watch and love so much... I was so psyched.”

She's especially excited for the young female fans who might discover Charly Bliss through Sabrina. “I still feel like I'm an angsty teenage girl," says the 25-year-old, adding that she loves when girls identify with themes in her songs such as identity discovery and growing up. “Seeing young women speak up about feeling connected to the songs, and feeling like the songs help them – at that point, I'm like, I don't care what any dude has to say about this song. It's not for them," says Hendricks. "I wrote that song for myself, and I wrote it for other women, so as long as it reaches those people... that's all I really care about."

With Young Enough, Hendricks shows that she understands just how much power and reach pop songs can have, empowering her listeners just as much as they empower her.

More like this
Kanye West Apologizes To Kim K "For Any Stress I Have Caused" In Rare Interview
By Jake Viswanath
Adam Levine Denies Having An Affair — But Admits He “Crossed The Line”
By Jake Viswanath and Radhika Menon
On 'The Handmaid’s Tale,' Christine Ko Fights Back
By Gretchen Smail
Jinkx Monsoon Is About To Get Real Sketchy
By Sam Ramsden
Get Even More From Bustle — Sign Up For The Newsletter