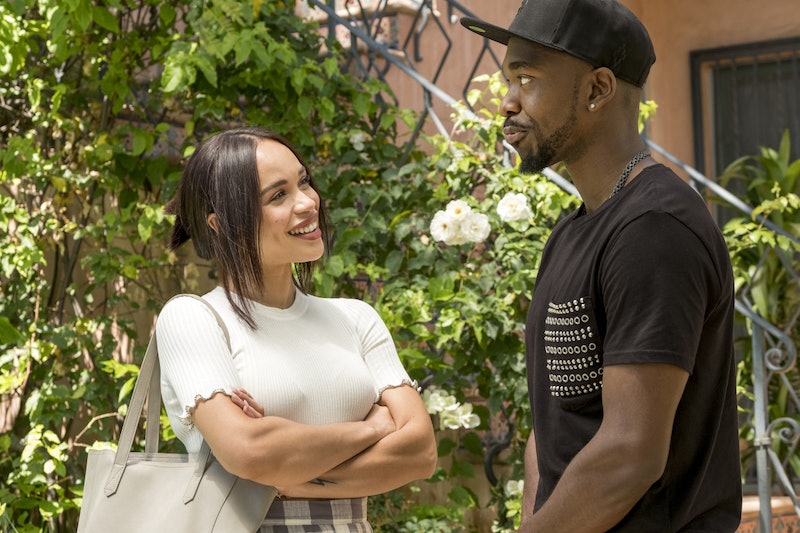 Cleopatra Coleman stars in Showtime's White Famous, a new series about a black comedian named Floyd Mooney (played by Jay Pharoah) who decides to start performing for a wider — read: "whiter" — audience. Even though the show's main premise is racially-conscious, Cleopatra Coleman's White Famous character, Sadie, has storylines that have nothing to do with her race... which is how the biracial Australian actor likes it. Speaking to Bustle over the phone, Coleman says that she chooses roles that aren't necessarily written for biracial women. Instead, she gravitates towards roles that don't rely on an actor's race or gender to quickly define exactly who they are.

"I’ve always played roles that could be played by anyone," Coleman says. "I’m very proud of that, and I want that to be something that continues in my career and in the world ... You may call it colorblind casting, I just call it 'casting.'"

Coleman prefers to focus on human stories and on breaking stereotypes through roles that explore a character's many dimensions, rather than just lazily relying on demographic information, like their race, gender, or sexuality. Even though Coleman has found many of these roles to play in Hollywood — she praises Fox's The Last Man On Earth for this, as well as White Famous — she still sees a lot of change that needs to happen. So the actor is taking matters into her own hands by writing her own scripts.

"I love the female perspective and I think we should make it more accessible to everyone. Like female-centric movies are not just for women, I think they’re for everyone," Coleman explains. In fact, she just finished filming a feature film that she wrote called The Region, in which she plays an environmental scientist. Coleman describes the film as, "Erin Brockovich set in the future," though she doesn't want to give anything more away.

Based on Coleman's outlook on casting, though, her film likely won't include Erin Brockovich-like commentary about how "shocking" it is that a sexy woman could also be smart enough to discover a water contamination crisis. While it's important to highlight the discrimination and derogatory comments that women still face at work, not every film about a powerful woman has to include such gender-specific drama.

Coleman's aim is that the main characters in her own screenplays could be played by men or women. The 29-year-old credits her outlook on identity to her own experiences as a biracial woman, which she explains are not as simple as many Americans understand it.

"I am not white, I am not black, I’m right in the middle, and so some people don’t understand that concept. And so you come to America, if you’re half black in America that means you’re black to most people, but that doesn’t really play anywhere else," Coleman says. "I live in a place where it can be quite lonely, but it also is my own place and there’s a load of other biracial people out there that are just like me and that’s where we lie."

Coleman views her identity as a "both" rather than an "either/or," as far as race is concerned. The actor's mother is Jamaican and her father is of Scottish and Australian descent. So it makes sense that she prefers to allow people's individual qualities drive their stories rather than limiting them through stereotypes. You may be confused, then, as to why she chose to take a role in White Famous, which seems so specifically about a white vs. black binary. But Coleman explains that its storyline actually transcends these boundaries.

"It’s a show about identity, and it takes place in the context of America and a black comic, [but] I think you could’ve applied this premise to basically any situation as a human being," Coleman says.

In her ideal world, an actor's identity wouldn't necessarily dictate the characters they play or the audience their films attract. Coleman specifically points out a gendered divide in how we consider comedies.

"What I hope is for men to be able to find women as funny as they find male comics," she says. "I think that comes down to the changes that are currently taking place in our world, you know, realizing that we’re all equal and funny is universal."

Just as humor is universal, so are many aspects of anyone's experience, regardless of which census boxes they fill in. And Coleman is hopeful for the future of entertainment in applying universal storylines to actors of marginalized identities. In her dreams, a woman will be allowed the complexity and contradictory characteristics frequently reserved for male characters.

"You can be sexy and funny, you can be feminine and strong," she says. "It’s fluid, there’s no rules, and that’ s what I want to see more of and that’s what I try to embody in my life." Fortunately, with boundary-less people like Cleopatra Coleman spreading their values through Hollywood, the future of film and television looks promising.

More like this
On 'The Handmaid’s Tale,' Christine Ko Fights Back
By Gretchen Smail
Jinkx Monsoon Is About To Get Real Sketchy
By Sam Ramsden
The New Bachelor Will Be Announced Next Week & Here Are The Top Contenders
By Grace Wehniainen
Mike Flanagan Teases 'The Midnight Club' In This Exclusive, Creepy Clip
By Grace Wehniainen
Get Even More From Bustle — Sign Up For The Newsletter