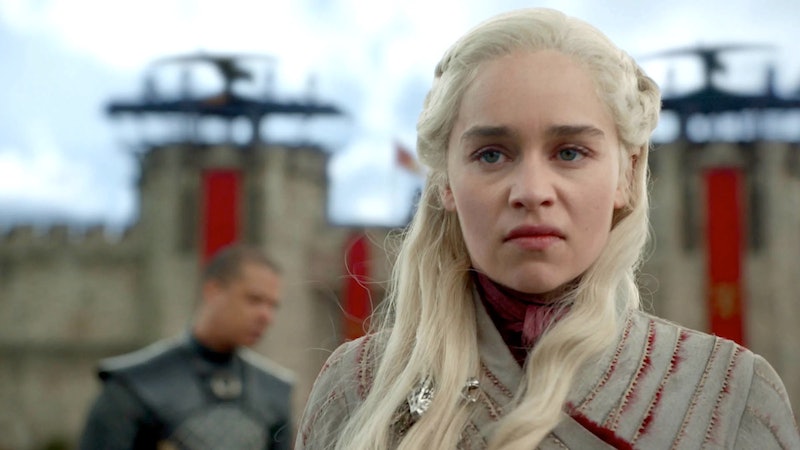 "Dracarys." With that word — and the slice of a greatsword — Daenerys lost one of the last allies she has left in the world. If you weren't worried about the Mother of Dragons breaking bad before, you should be now. Will Dany become the Mad Queen on Game Of Thrones? That's definitely been one of the possible endings for the Targaryen ruler that fans have been hypothesizing about for years. But it seems more possible than ever after the tragic events of Season 8's fourth episode, "The Last Of The Starks."

The episode ended with Missandei's decapitated body tumbling from the walls of King's Landing; she had been captured when Euron's fleet ambushed Dany's forces on their way to Dragonstone, and was executed by the Mountain on Cersei's order when Dany refused to surrender. This is simply the latest — and most painful — loss in a series of hard losses for Daenerys, and is likely to be the last straw for the Dragon Queen.

To say that coming to Westeros has been a disaster for Daenerys would be an understatement. She set sail from Meereen with a fleet of Greyjoy ships, the entire might of the Dothraki and Unsullied, three full-grown dragons, several powerful Westerosi allies, and a deep bench of loyal advisers. In the time since she arrived in her homeland, Dany has lost her Greyjoy fleet and Dornish allies in an attack by Euron; she lost her Tyrell allies in a surprise maneuver by Cersei; she lost one dragon while saving Jon from the Night King; she lost her identity as the last Targaryen and heir to the Iron Throne when she learned that her boyfriend Jon Snow was actually Aegon Targaryen; she lost the majority of the Dothraki and half the Unsullied in the Battle of Winterfell, as well as her most trusted advisor, Jorah Mormont; and now she's lost another dragon and her closest friend in quick succession.

Daenerys now has: a depleted army made up mostly of exhausted Northerners who would probably abandon her cause the moment they found out their own beloved leader had a better claim to the throne than Dany; one dragon whose usefulness is hamstrung by Qyburn's bigger, better ballistas; one loyal commander in Grey Worm, who may not be much longer for this world if he tries to grapple with the Mountain; and two advisers who are spending less time these days advising her and more time conspiring behind her back about whether Jon Snow would make a better ruler than the queen they've sworn to serve.

Even before the deaths of Rhaegal and Missandei, it was clear that Daenerys was already feeling isolated and lonely. The Breaker of Chains is used to feeling loved and worshiped by the masses as she was in Essos, where she freed thousands from slavery. She expected a similar reception in Westeros, where she thought the people would embrace their rightful queen with open arms. Instead, she's been greeted with hostility and suspicion. It's easy to forget how deeply the anti-Targaryen bias runs throughout the Seven Kingdoms, how personal it is for many of the characters, and just how recently some of this "ancient history" took place.

The Mad King's reign ended only 20 or so years ago; Dany's father murdered Sansa's uncle and grandfather. These aren't distant, nameless relatives; they're close family members.

Dany's jealous feelings while watching the masses praise Jon in the aftermath of the Battle of Winterfell eerily echo the way Viserys envied the Dothraki's adoration of Daenerys way back in Season 1. Drawing parallels between yourself and Viserys Targaryen is never where you want to be in life; and the way the camera continually captured Dany throughout the feast — alone, in extreme close-up, with little flames of candlelight flickering in her eyes — is both an evocative encapsulation of her current state of mind, and ominous foreshadowing of things to come.

It's understandable if Dany is mad after suffering so many heartbreaking setbacks and losses. But is she just "mad"… or is she mad? Sansa, Arya, and Varys at least seem to be increasingly concerned about their queen's mental state, even as Jon and Tyrion push back against their concerns. There's no question that Jorah and Missandei were the two people in Daenerys' life who most kept her worst impulses in check. Jorah believed that Dany had a "gentle heart," and while it's true that he often brought out that side of her, it's also true that she has a penchant for crucifying her enemies, feeding them to her dragons, and/or burning them alive. Without Jorah by her side to encourage her better nature, she may too easily take Missandei's advice ("Dracarys") to its worst extreme. Thanks to Jaime, her father never got the chance to "burn them all"… but Daenerys still might.

It would have been a relatively simple task for the writers to make Daenerys a villain for both the characters and the audience; but what's interesting about these recent developments is that the show has managed to make the audience sympathetic of Daenerys' increasing isolation while simultaneously making it clear why the characters would be growing uneasy about her state of mind. Remember, the characters haven't been watching the same show the viewers have for the past eight years. The audience knows Daenerys in a way the Westerosi don't — and even if we understand the reasons why she might "break bad," the characters around her probably won't.

Game Of Thrones has rarely existed in shades of black and white. Thankfully, it doesn't seem like the writers are trying to paint Daenerys as evil, even as she grows worryingly unstable. It's not as simple as Dany being cruel or insane like her father; she's simply a woman driven to desperate lengths by her tragic circumstances. Characters on the show might paint her with the "Mad Queen" brush, but hopefully the audience knows Daenerys better by now than to think of her as a villain — even if she doesn't end the show as a hero, either.