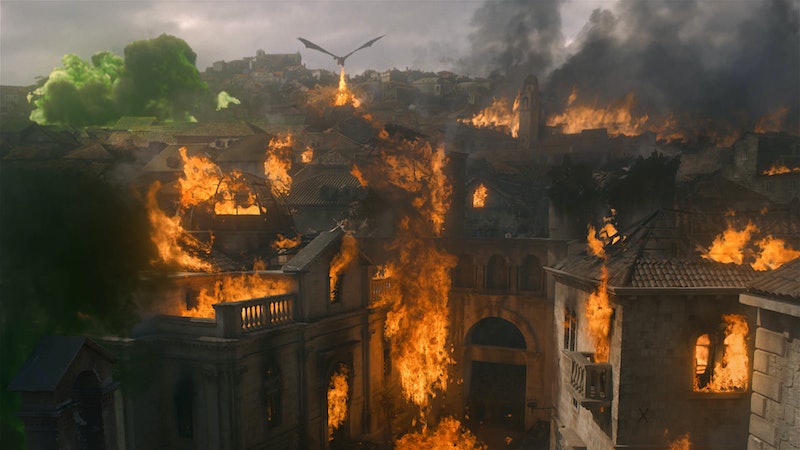 Spoilers ahead for Game of Thrones Season 8, Episode 5. It seems that Daenerys took Missandei's final words a little too literally. Against Tyrion's wishes, Dany burned King's Landing on Game of Thrones Season 8, Episode 5, scorching both soldiers and civilians alike. While fans were pretty sure the Dragon Queen was going to do just this, it was still shocking to watch her fly above the capital, Drogon breathing fire down on terrified townspeople.

So why did Dany do King's Landing dirty like this? For one, she really wants the Iron Throne and will seemingly stop at nothing to get it. And it was going great at first: Drogon was knocking down the outer wall and putting the Golden Company to waste, while the Dothraki and Unsullied were doing their thing on the ground. However, the queen went off book after the bell rang, which signaled the city's surrender.

Audiences kept seeing flashes of Dany and Cersei, who were boring holes into each other from across the city. At this point, something changed in the Dragon Queen's face, and she decided to continue laying the city to ruin. Audiences watched, horrified, as she flew Drogon above the streets of King's Landing, burning innocents to a crisp.

This was deeply disappointing to Jon, Tyrion, and viewers alike, with many fans pointing out that this wasn't in line with Dany's character. After all, isn't she the Breaker of Chains and Protector of the Realm? Since when did she start killing innocents instead of rescuing them, like she did in Astapor and Meereen?

It's certainly disheartening to see Dany's character get seemingly assassinated, and it's likely not what George R. R. Martin would have wanted.

That said, other fans were on board with her violent takeover.

But whatever fans thought of Dany's seemingly uncharacteristic violence, she still did a shocking amount of damage to the capital with just one dragon, so it's anyone's guess what would have happened if Rhaegal and Viserion were still alive. What's more, there was a scene toward the end of the episode, which harkened back to the dream Dany had at the House of the Undying back in Season 2.

As Dany entered the throne room, audiences saw snow falling. However, as Twisted8999 theorized on the Game of Thrones subreddit ahead of the March 12 episode, "It was never snow... it was ash!" And it seems like the Redditor may have been right, as audiences saw ash falling on the city like snow after the Battle of King's Landing.

Furthermore, audiences predicted that Arya would add Dany's name to her list — especially now that the Hound, Cersei, and the Mountain have all been killed, who were people she was hoping to take out with Needle. After all, Arya is a Stark, and the Starks are perhaps the last honorable house left in Westeros. And now that Cersei is dead as a doornail, Dany may have just become the newest Big Bad in Westeros.