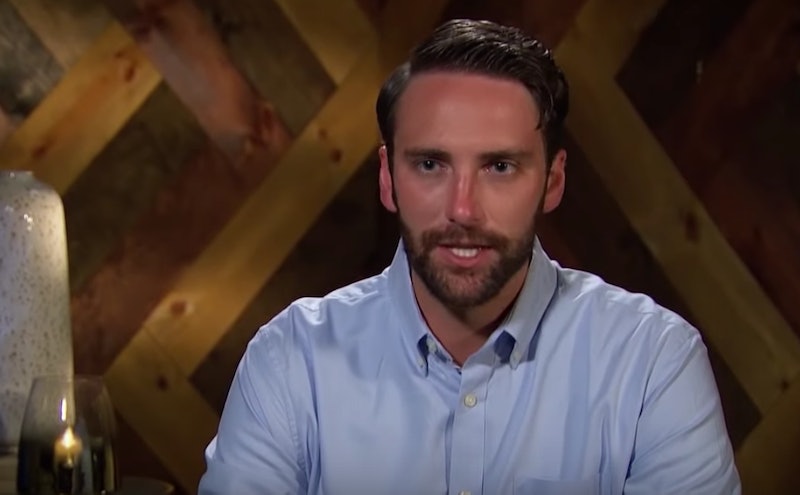 It's been an interesting road for Cam on The Bachelorette, to say the least. Though he started off strong by receiving Hannah's first first impression rose before the season even officially started, he made enemies in the mansion just as quickly, and not long after, landed on Hannah's bad side, too. There was also a lot of freestyle rapping that not a single person asked for, and way too many utterances of his signature catchphrase, "ABC: Always Be Cam." Which is why when Hannah sent Cam home on The Bachelorette during Monday night's episode, it was probably for the best.

It all started when Cam revealed a difficult medical diagnosis to Hannah just before the rose ceremony. He has some pretty severe health issues, and almost had to amputate his leg a few years ago. Cam also revealed that amidst all of this, he learned his grandmother had just died, and then when other surgeries happened, he had to re-home a 10-month-old puppy, which apparently was really rough on him.

It's truly a sad story, and heartbreaking that Cam had to go through those things, but some of the other men in the house were skeptical of his intentions. Mike told Hannah that he thought Cam was nervous about going home, and he was gunning for a "pity rose." Mike even said Cam told the other contestants he planned to tell her a sad story in the hopes that she'd keep him around afterward. This obviously did not go over well.

"I just think it's an interesting time for you to bring up this story in a last effort to stay," Hannah told Cam after pulling him aside again. "What you told me is very serious, but it feels very manipulative with the timing of it... This just feels really scheme-y and slimy to me. It feels really, really calculated." Cam completely denied that he was using his story for leverage, and later said it was one of the most "devastating" things he's ever heard in his life. "I would never compromise the integrity of what I've been through for a pity rose," he told Hannah. "This is a serious thing."

But in the end, Hannah gave Kevin the final rose and sent Cam packing. Of course, veteran Bachelorette fans may have known that Cam was not long for this world, as there were a lot of early red flags even before this "pity rose" situation. It's not uncommon for contestants to butt heads — it is a competition, after all. But Cam played things a little too hard for some of the other men's liking. Not only did he crash a group date he was not invited to, stealing Hannah's time away from Devin, who actually was supposed to be there, but he then dragged Kevin along for an awkward, impromptu two-on-one just to make sure he sent the other men a message.

Kevin described that behavior as "control freakish and weird," and honestly, he's not wrong. It felt a lot like Cam was more dedicated to putting on a show for the other contestants (or rather, viewers at home) than actually getting to know Hannah.

Unsurprisingly, Cam also has a bit of an unapologetic streak. He's said time and time again that the only thing he can do is remain true to himself, even if living that truth means being overly aggressive and a little disrespectful to the people around him. That's arguably what it takes to survive in a competition sometimes, but it's certainly not a quality that Hannah would want in a romantic partner — she needs someone who has the ability to self-reflect and think critically about their actions, not just use "it's who I am!" as a crutch when exhibiting questionable behavior.

That being said, we only saw the parts of Cam that producers wanted us to see. Maybe if he'd had more time or played his cards a little differently, there might have been more of a spark between him and Hannah. It's all over for now, but keep an eye out — Cam might be just the kind of personality the powers that be want to bring to Paradise.