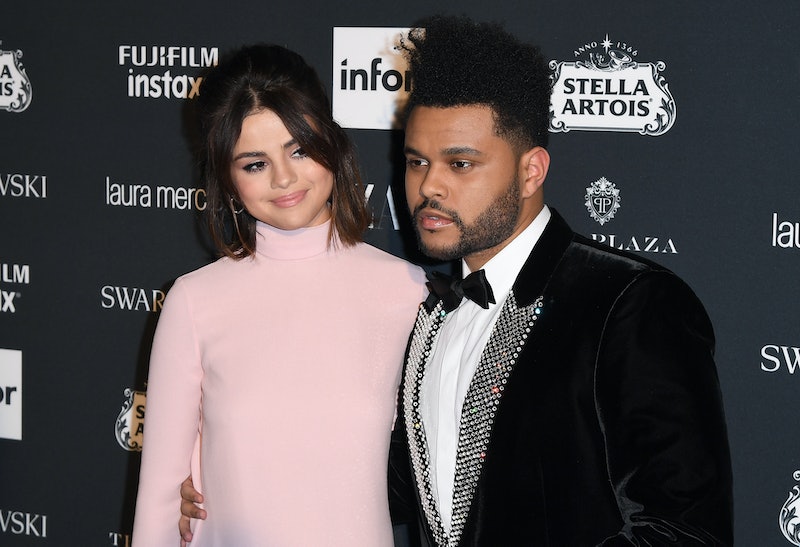 Selena Gomez and The Weeknd are reportedly over, according to People, but why did Gomez and The Weeknd break up after 10 months of dating? It seems that their busy schedules played a major role. Bustle has reached out to both of their reps for comment, but did not receive a response at the time of publication.

Per a source who spoke with People, "She and Abel [The Weeknd's real name is Abel Tesfaye] have been going back and forth for a few months about their relationship." The same source added, "It’s been hard with him being on tour and her shooting in New York. That wasn’t easy on them." According to the insider, Gomez "always made an effort" to see The Weeknd by going to his shows and "that played a part in them getting distant." The source said further that they've been dealing with this particular issues "for moths" and also added, "It’s over for now, but they’re still in touch."

The reported breakup comes on the heels of Gomez being spotted with Justin Bieber, her on-again, off-again boyfriend from 2011 to 2015. In photos obtained by TMZ and shared Sunday, the two were seen grabbing breakfast in Westlake Village, California. Per TMZ, they also went to church together and Bieber ended up back at Gomez's Studio City home later Sunday evening. On Oct. 24, TMZ also reported that Bieber chilled with Gomez at her home. At that time, multiple sources also told the outlet the former couple hung out the week prior.

According to a source who spoke with Us Weekly about their apparent rekindled friendship, "Selena is simply trying to make peace with Justin after her illness. He has been great to her since her surgery and they are on good terms right now. They got back in touch recently through their friends and have seen each other at church." In September, the "Fetish" singer revealed she had undergone a kidney transplant.

The Weeknd and Gomez first made headlines as a couple in January. TMZ released photos of the two kissing, which shocked many of their fans. Since that moment, they couldn't escape attention, but they pretty much kept their relationship private, save for instances like the time he shared an Instagram of the two in April.

As Vogue's April cover star, the "Wolves" singer made it clear that she wouldn't be discussing The Weekend publicly. After being asked about him, Vogue reported that Gomez said she would no longer talk about her relationships as openly as she once did, especially since she felt like negativity came her way when she did talk about her former romances. "Look, I love what I do, and I’m aware of how lucky I am, but — how can I say this without sounding weird? I just really can’t wait for people to forget about me," she said.

On Monday, Elle reported (before the breakup reports) that The Weekend unfollowed some of Gomez's closest friends and family on Instagram, including her mom, her assistant, and her friend/kidney donor, Francia Raisa. That said, the publication reports Gomez and The Weeknd still follow each other. According to Elle, this is similar behavior to when "I Feel It Coming" musician and Bella Hadid split. Apparently, he unfollowed Hadid's close friends and loved ones before he unfollowed her.

Regarding Gomez and The Weeknd's reported breakup, there's a good chance neither of them will even address it. They've remained tight-lipped throughout the span of their time together. So, if you're hoping for some type of denial or confirmation, don't hold your breath. If they ever do discuss their supposed split, it will most certainly be on their own terms.

More like this
Hailey Bieber Just Responded To *That* Viral Met Gala Moment
By Radhika Menon and Sam Ramsden
Dixie D’Amelio & Noah Beck “Love Each Other” Despite Breakup Rumors
By Julia Emmanuele, Jordyn Tilchen and Grace Wehniainen
Khloé Kardashian Is Reportedly Dating A Private Equity Investor She Met Through Kim
By Jordyn Tilchen and Jake Viswanath
The 'Love Island' Wedding Mystery That No One Saw Coming
By Darshita Goyal
Get Even More From Bustle — Sign Up For The Newsletter