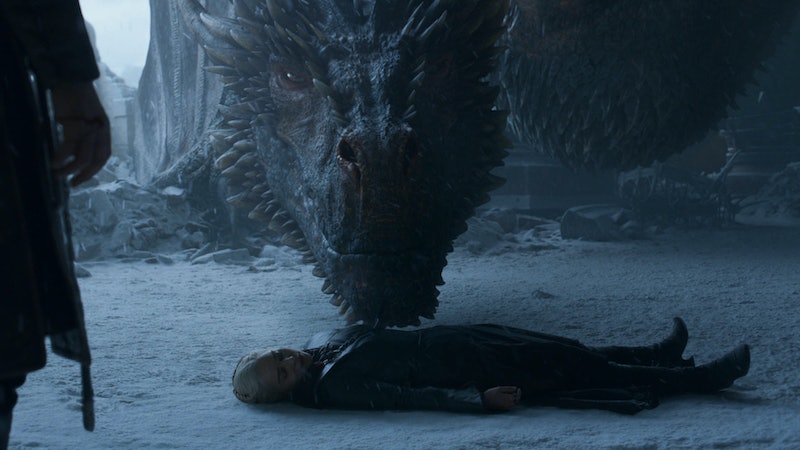 Spoilers for Game of Thrones Season 8 below.

The last episode of Game of Thrones has finally come and gone, and Daenerys was forced to answer to her crimes against King's Landing, and she did so at the hands of Jon Snow. After plunging a dagger to her heart, Jon was left to sob about his choices alone. That is, until Daenerys' only child came after feeling his mother die. The dragon was furious and obviously still had a lot of fire left in him after destroying the Iron throne, so why didn't Drogon kill Jon in Game of Thrones when he had the chance?

It was pretty clear that Jon murdered Dany, so it's not a question of whether Drogon knew or not. And it's not really about forgiveness or lack of anger (because there was a lot of that on Drogon's part). Drogon's anguish was palpable, and the heart-shattering moment when he tried to nudge his mother back to life was almost more cruel to watch than her actual death. But, instead of getting revenge, he just grabbed Daenerys in his claw, and flew away. There's no official commentary from the showrunners on why Drogon did spared Jon, and of course no insight into Drogon's head, but there are a few options (some more plausible than others).

Jon can ride dragons and was able to pet Drogon without getting his hand bitten off or being attacked, all because of the Targaryen blood coursing through his veins. His lineage was something that the dragons seemed to sense before he even knew it. So it's possible that Drogon could also sense that fire would leave him unscathed, even though it hasn't been proven on the show.

But even if Drogon knew Jon couldn't burn, he also has large teeth that can easily kill a man, so it's also a matter of Drogon not wanting to kill Jon, period. Because of this, it's possible that because of his lineage, Drogon couldn't harm Jon. Almost like he wasn't allowed to, as some old dragon code of conduct or something. These aren't as likely of options, but it's possible that even though being a Targaryen didn't matter to Jon's story at all in the end, it might have been what saved him from a grisly dragon death.

The Throne Was To Blame

A more agreed-upon consensus with fans is that Drogon actually understood what his mother was fighting for, and knew that she had gone a little off the deep end with her attack on King's Landing. Which means that the dragon burned down the throne instead of Jon because he understood that the throne — the symbol of ultimate power in Westeros — was the root of his mother's turn. Without that seat of power, her quest never would have ended here, and she'd still be alive.

So, that's a lot of intuition and brain power for a dragon, but it's the more likely option. Drogon didn't just blow off steam anywhere after finding his mother dead. He specifically aimed his fire at the throne and didn't stop until it was fully melted.

Drogon, of course, didn't know what was to become of Westeros or who the new ruler would be, but he did his mother a final service of breaking at least some point of the wheel she was intent on changing. He helped her fulfill a bit of her legacy, and he didn't need to kill Jon to do it.

More like this
Alicent's Green Dress In 'House Of The Dragon' May Be An Act Of War
By Kadin Burnett
Nicola Coughlan Shared A Lady Whistledown Excerpt From ‘Bridgerton’ Season 3
By Grace Wehniainen, Alyssa Lapid and Sam Ramsden
'House of The Dragon' Episode 6 Will Take Place A Decade After Episode 5
By Kadin Burnett
Viserys’ Fate On 'House Of The Dragon' Could Differ From The Book In This Surprising Way
By Grace Wehniainen
Get Even More From Bustle — Sign Up For The Newsletter