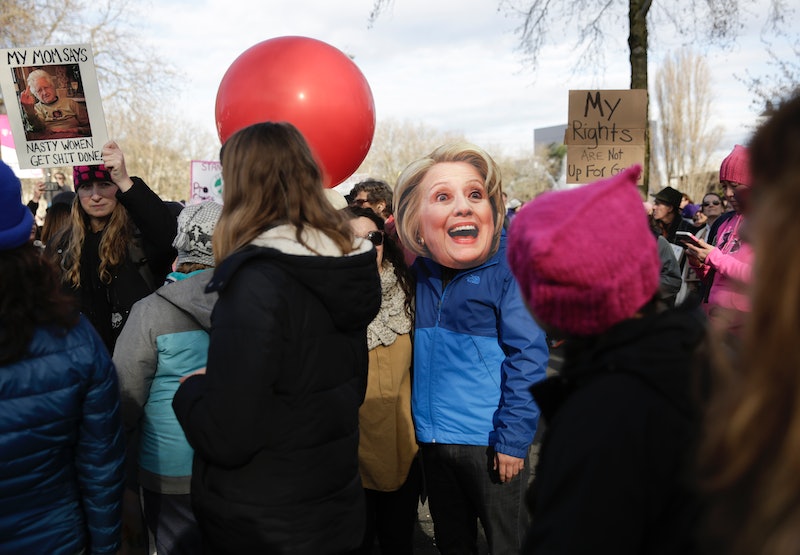 The Women's March on Washington proved that the anti-Trump movement is a force to be reckoned with, drawing around 470,000 people, according to conservative estimates, and easily dwarfing the turnout for President Trump's inauguration. Trump's former Democratic opponent took note of the protest on Twitter — but while Hillary Clinton's Women's March tweet is nice, it might have been nicer if she'd attended the march itself. Instead, she attended Trump's inauguration the day before.

To be fair, Clinton was in a very difficult and unique position. On the one hand, there's an argument to be made that the losing* candidate in a presidential election should always attend their opponent's swearing in, as their presence reinforces the peaceful transition of power as a valued American tradition. That was almost certainly one of the reasons why Clinton opted to show up when Trump took the oath of office — and likewise, it was probably the biggest argument against her attending the march.

On the other hand, Clinton is also the first female presidential candidate of a major party, a longtime proponent of women's equality and an inspiration to many women around the country. Given that Trump is more or less the human embodiment of misogyny, there was also a strong argument that Clinton should have skipped his inauguration out of solidarity with the many women he's insulted during his years in the public eye, and gone to the Women's March instead.

Because the Women's March was simultaneously a feminist protest and an anti-Trump protest, Clinton was stuck between a rock and a hard place: Go the inauguration and risk offending her supporters, or go to the Women's March and risk showing disrespect for the peaceful transition of power. That's a tough spot to be in.

Still, she could have gone to both events. This would have signified that, while she does respect American electoral norms and doesn't dispute Trump's legitimacy as president, she also stands strong with the 65 million Americans who voted against Trump and do not want him as their president. Sure, nobody really doubts that, but it would have been a nice symbolic gesture.

But maybe this is unfair to Clinton. Regardless of how you feel about her politics, it's indisputable that she's worked really, really, really hard over the last eight years. This is a woman who put herself through the unspeakable rigors of a presidential campaign at the age of 68 — and that was after serving as First Lady, U.S. Senator and Secretary of State. She's probably pretty tired right about now, and if anyone has earned the right to rest, it's her.

Ultimately, Clinton's attendance or nonattendance isn't the most important part of this equation — clearly, she approves of and respects the event itself, as evidenced by her tweet. What's much more important here is that half a million Americans rose up the day after the new president was inaugurated to voice their displeasure with him and everything he stands for. That's an enormous accomplishment, and gives an early boost to the anti-Trump efforts that will surely continue throughout his presidency.