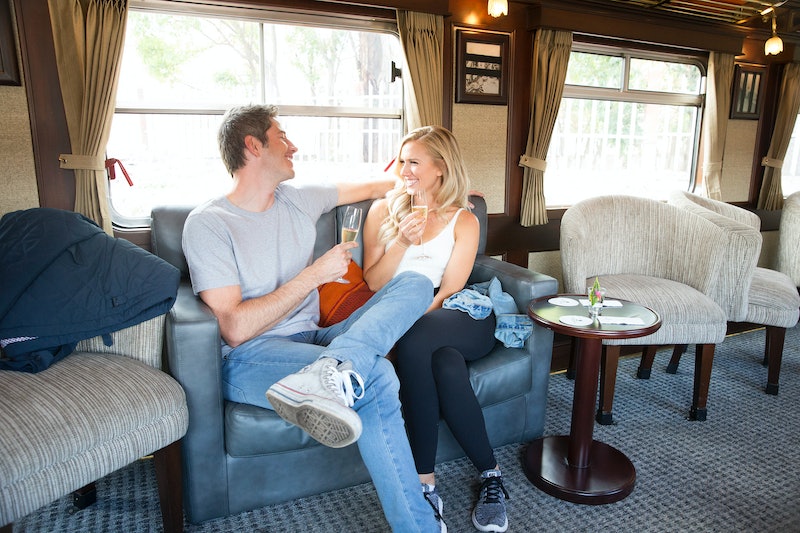 On paper, Bachelor contestant Lauren Burnham has everything necessary make her a fan favorite: she's sweet, genuine, and seems to be on television for the "right reasons." But Lauren has struggled to win over Bachelor fans during Arie's season, becoming the target of many sassy tweets, and some straight-up mean posts. Lauren's reserved nature and lack of emoting has lead audiences to deem her bad television. But Lauren has made it to the final two, and his excitement about her is undeniable. So, why do Bachelor fans hate on Lauren? Lauren is not dynamic in the way some contestants are, but this doesn't make her boring.

Arie wrote about his connection with Lauren in his People blog. Even a few weeks back, Arie's feelings for Lauren are clear. He wrote:

"From the moment I met her, I knew I wanted to get to know Lauren more. In life, sometimes you’re just pulled to certain people. The problem was, until our date in Paris, she was unable to open up...The more I spent time with Lauren, the stronger I felt about her...Even if I couldn’t quite explain why, I was falling in love with Lauren."

While Arie is clearly connected to Lauren on the show, she hasn't had the same effect on many fans. Sarcasm-tweeting The Bachelor is a way of life, but some of these assessments are pretty unfair:

The response to Lauren on The Bachelor has been harsh, to say the least. Lauren's mainly criticized for being "boring" or "plain" and fans have questioned all season what draws Arie to her. Most contestants cast on The Bachelor and Bachelorette are good TV, naturally performative people who show us what they are feeling. Lauren has held back on the show, fearful of getting hurt on national television. Her reserved nature hasn't always translated on television, but that's just Lauren being herself.

Sharleen Joynt reflected on Lauren's put-together personality and why this makes her an interesting competitor in her All The Pretty Pandas recap. The former Bachelor contestant summed Lauren up well, writing:

"The more I see of Lauren the more I like her. She is so poker-faced, yet you could see in her face in the above clip (where Arie leaves the table after she says she is falling for him) that she felt unbelievably vulnerable. Watching someone like her try to keep it together, while clocking the camera staring at her, is really compelling, far more so to me than the many contestants who just easily and willingly cry, seemingly on command. It's tears like the above that make good reality TV, not an actor's tears."

It's her lack of performative emotion that makes her compelling, even if not all fans agree.

Fellow contestant Jacqueline Trumbull defended Lauren from the hate. She said in a tweet about Lauren, "We only ever see a sliver, but she is stoic, self contained, and elegant." In a show that can often pit women against each other, it's nice to see the former competitors supporting one another. At the end of the day, it is a television show that can only capture parts of a person, so it's possible there's more of Lauren the audience is not seeing.

Lauren's Instagram reveals a goofier side to her personality, one filled with puns and jokes. While her serious side has been on display, that's not all there is to her. According to her LinkedIn, Lauren works as a business solutions sales executive for Vonage Business (a phone service company) and her sales background implies a more outgoing part of her personality we're not seeing. And who can blame her for holding back on national TV?

The dramatic conclusion to Arie's season is about to air and Lauren posted on Instagram that she is "Shakin' off the haters." At the end of the day, Lauren just isn't the normal outgoing Bachelor contestant but that doesn't mean she can't create compelling television or be a part of a real love story. As the finale plays out, hopefully fans can learn to sympathize with Lauren and respect her for how she carries herself.