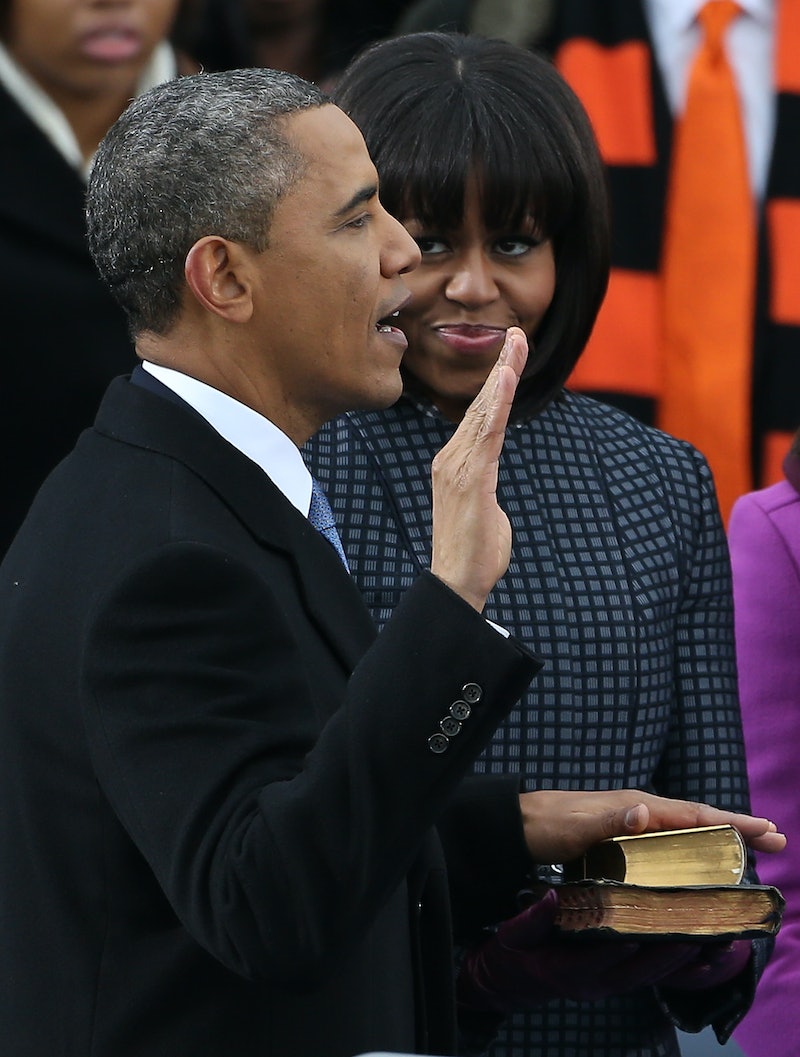 On Jan. 20, Donald Trump will take the presidential oath of office as outlined in the Constitution, but will most likely add four words to it: “So help me God.” Those words are found in many legal oaths. For instance, the line appears in the oath legally prescribed for federal justices and judges, and anyone who’s binged any amount of any flavor of Law & Order will know it from dramatized courtroom testimonies. However, it is not an official part of the presidential oath. So why say it?

The question is complicated. In the modern era, every president since Franklin D. Roosevelt has appended the phrase, but before that, the history is somewhat murky. One part of the problem is that the oath has not always been administered in the modern repeat-after-me fashion; several presidents have had the oath read to them by the chief justice, after which they say, “I do,” (I now pronounce you President and Nation?) and some of these I-do-ers added it to their assent. At his inauguration in 1881, Chester A. Arthur took the oath by saying “I will, so help me God.”

Controversy abounds when it comes to which presidents have said what (at least, for those presidents who took the oath prior to the recording age). An account in the Sacramento Daily Union of Abraham Lincoln’s second inauguration in 1865 has the Civil War president kissing the bible before adding his own “So help me God!”

Perhaps the most controversial “So help me God” is George Washington’s. Though there is a commonly held belief, endorsed by famous historians like David McCullough in his biography of John Adams, that Washington added “So help me God” to the first-ever uttered presidential oath — and thus, started some sort of tradition — other historians dispute that idea.

“There is absolutely no extant contemporary evidence that President Washington altered the language of the oath as laid down in Article 2, Section 1 of the Constitution,” wrote Peter R. Henriques, professor Emeritus of History at George Mason University, and author of Realistic Visionary: A Portrait of George Washington.

“It would have been completely out of character for George Washington to have tampered with the constitutional text in this way,” Henriques continued, noting that Washington was a “Constitutional literalist.”

“Would such a man, during the very act of becoming the nation’s first President, alter an oath that had been decided upon and written into the nation’s fundamental charter?”

Regardless of the origin of the “So help me God” tradition, it appears to be firmly entrenched in inauguration protocol, and there’s no reason to expect Trump won’t also fall in line.