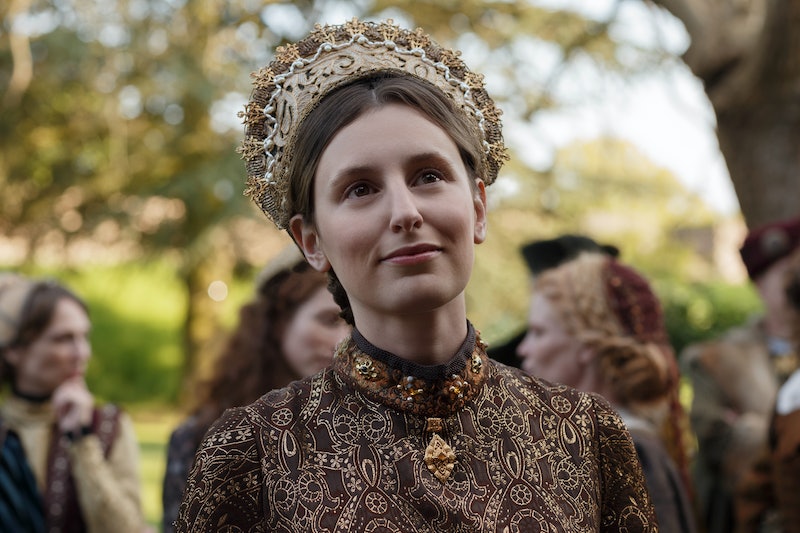 The queen and king of England may have been glad to see Catherine Of Aragon arrive, but others didn't feel the same. Why doesn't Maggie Pole like Catherine in The Spanish Princess? Prince Arthur's aunt does not care for her nephew's new wife for an understandable reason. The queen sort of explained this to Catherine in the premiere episode of The Spanish Princess. It turns out that Catherine's mother would not let her come to marry Arthur until all other claims to the throne were eradicated.

In the show, as in real life, one of the people who existed on paper as a threat to Arthur's reign was Edward Plantagenet, Maggie's brother. He was executed to ensure Catherine's marriage to Arthur. As Entertainment Weekly reported, Edward's execution was made more tragic because historians believe he was mentally disabled. He was not a real threat to Arthur in anything but lineage formality, and yet he was still murdered.

Naturally, when Catherine arrived on The Spanish Princess, Maggie was not thrilled to see her. "I would like that Spanish girl to sink down to the bottom of the ocean, because she is the cause of my pain and grief," Maggie told her husband. She added, "I can't bear it. It hurts even to look at her."

Laura Carmichael, who plays Maggie on the show, told Town & Country that her character is relatable because she just cares about the safety of her family. "She's got the feeling of having seen all of her family lost, killed ... she feels like her family should still be there. She would be having a completely different time if the Plantagenets were still on the throne," Carmichael said. "At the end of the day she just wants to keep her family safe, and regardless of who's in charge, she'd rather keep out of it."

The real Maggie didn't get to keep out of it much. According to the National Portrait Gallery, she was appointed to be part of Catherine's group of ladies-in-waiting.

In the show, Catherine was unaware of Edward's death or the reason for it. EW reported that's accurate to real life. Unlike on the show, though, the real Catherine felt quite badly about it. On the show, the character tells the queen, "I will not share your guilt. If you spill blood then it is yours." In real life, EW reported that she felt all of her adult suffering (marriage struggles, miscarriages, etc.) were punishment from god for what it took to put her on the throne.

One of Catherine's greatest sufferings was the annulment of her second marriage — to Arthur's younger brother. He left her for Anne Boleyn, which caused a massive uproar in the steadfastly Catholic England. The National Portrait Gallery reported that Maggie Pole was actually so dedicated to her religion that she took Catherine's side in the matter, and didn't want the king to defy the pope and get what was essentially a divorce.

In that sense, she had a code of morals that went deeper than her hatred of Catherine. Spanish Princess showrunner Emma Frost told Harper's Bazaar that "Maggie's always been the moral barometer of the show," and that she doesn't appreciate the royal family's infighting and plotting. On the show, Catherine may not yet understand the scope of what her marriage did to Maggie, but she's going to need her support when the crown inevitably turns on her.