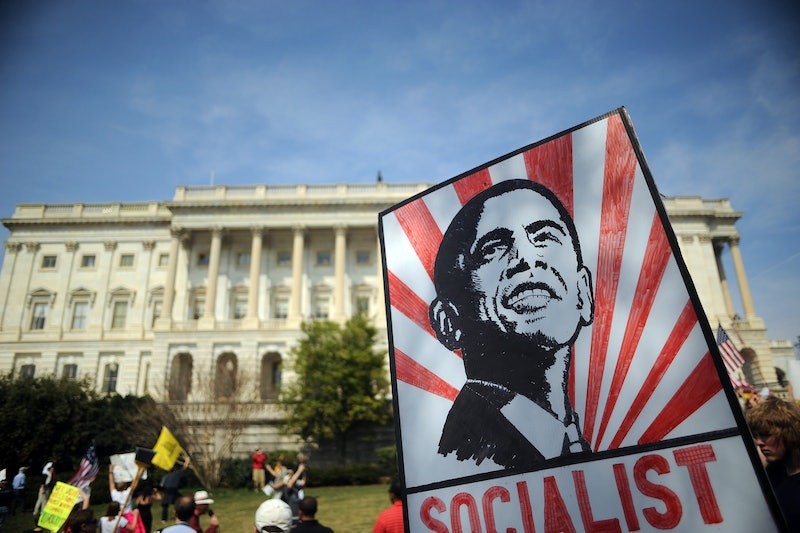 There are a lot of questions swirling around the supposedly imminent repeal of the Affordable Care Act. However, there are probably none bigger than the question of what the promised replacement will look like. And now, Donald Trump's latest Obamacare replacement promise seems to be leaning into the dangerous territory of what his Republican-led Congress might call socialism.

Trump claims he "[doesn't] want single payer," and yet he also claims that this super terrific secret plan will offer "insurance for everyone." People "can expect to have great healthcare ... in a much simplified form," Trump told the Washington Post. In typical Trump fashion, he also claimed that people would "be beautifully covered." Where exactly this beautiful coverage would come from and what it would include are just a couple of the details that the president-elect left out.

He never wants us to forget that he's a deal-maker, though, so he did specify that he would force drug companies to negotiate about Medicare and Medicaid prices. To me, that doesn't say anything about how everyone's going to get beautiful health coverage. On the other hand, the phrase "insurance for everyone" does bring something else to mind: universal health coverage. And for many on the right, universal health coverage is "socialism" — and that's a bad thing, according to them.

Insurance for everyone is an idea that Democrats and progressives can get behind. After all, the ACA brought health insurance to 20 million more people, with insuring everyone as its ultimate goal. A quick look outside of the U.S., though, finds that health coverage for everyone isn't difficult to find. In fact, the U.S. is the only developed nation without universal health care. While the other countries that guarantee health care for their citizens don't provide it through the government, that option (also called single-payer) is by far the most commonly used strategy. And guess what? People in single-payer countries tend to be very satisfied with their healthcare systems — far moreso than Americans are with theirs.

At a Michigan rally over the weekend protesting the move toward repealing Obamacare, Bernie Sanders noted: “This is the wealthiest country in the history of the world. It is time we got our national priorities right."

For now, though, Trump has ruled that out, and the Republicans in Congress would never approve it anyway. However, the language that Trump is using compared to what congressional Republicans are saying suggests that they may not quite have gotten around to discussing what the replacement for the ACA will be. Paul Ryan, for example, has tended toward the term "universal access" to health insurance, rather than universal health insurance.

When you're talking about the most vulnerable members of society, those who have benefited the most from the ACA, there's a big difference there. The legislative and executive branches had better work out their differences, because if they go through with this repeal, there will literally be people's lives hanging in the balance.