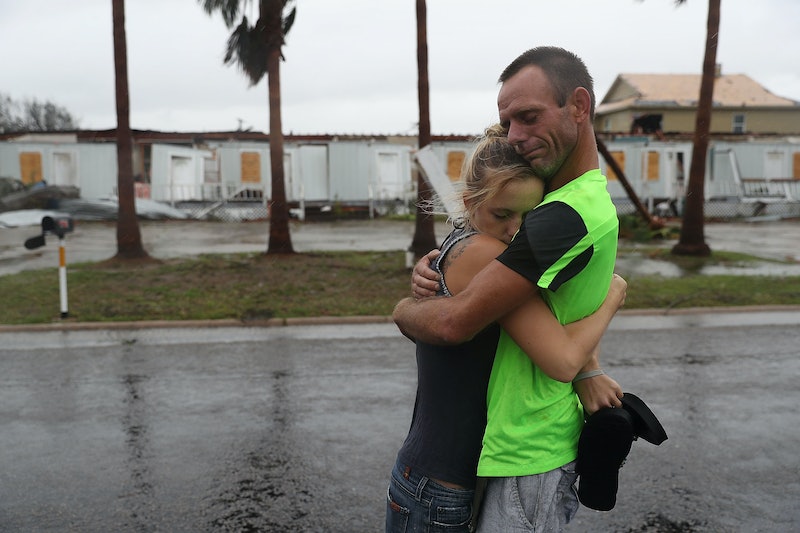 Hurricane Harvey made landfall in Rockport, Texas, on Friday night, just 30 miles north of the city of Corpus Christi, and the area was hit hard. Ahead of the storm, Texas Gov. Greg Abbott issued an emergency warning for 30 counties, urging some residents to evacuate in order to avoid the fallout, though some didn't heed Abbott's advice. According to a Vox report about why people won't evacuate during a Hurricane like Harvey, there are a few reasons.

Part of Vox's report is based on Rutgers psychologist Cara Cuit, who lead a 2014 study titled Best Practices In Coastal Storm Risk Communication. According to her research, one of the key reasons people refuse to evacuate the sight of a storm is pets. According to a 2011 poll from the American Society for the Prevention of Cruelty to Animals, as many as 30 percent of Southern pet owners (where the majority of hurricanes occur) don't have an evacuation plan for their pets. Because of this, there are times when owners prefer to stay with their furry family members — even when the decision may prove dangerous.

Other factors that keeps people from evacuating hurricanes is the fear of abandoning their homes, or the inflated feelings of confidence people gain after surviving hurricanes in the past.

And then, there is the heartbreaking reality of elderly or disabled people who simply unable to evacuate due to physical limitations. Those who don't have the assistance of neighbors or friends are sometimes left without a choice. Also, those with less money or resources will have more difficulty traveling out of a storm, even if the state is offering assistance at shelters upon arrival.

But it's not all grim. Perhaps one of the most fascinating reasons people don't evacuate hurricanes is linked to feelings of communal responsibility. In a 2009 paper published in Psychological Science, Stanford and Princeton researchers polled Hurricane Katrina survivors — both those who evacuated and those who didn't — about their experiences. Their findings were far more nuanced than anticipated.

The study found that many of the survivors who stayed put during Katrina openly valued "connecting to others, being strong, and maintaining faith in God." The paper also concluded that many people were choosing to use what they had to help others also stuck: “Given the limited material resources available in working-class Black contexts, stayers more often than leavers emphasized the importance of connection to and caring for others."

Nicole Stephens, who lead the 2009 study, also emphasized the fact that people who don't evacuate are often victim-blamed for their personal losses, or treated as foolish. "There’s this mismatch between the way that the event was seen from the outside and the way that the people themselves actually experienced it," Stephens wrote in a press release.

Certainly, the goal is for everyone to be armed with evacuation options and resources. However, if people choose to stay, it's important to recognize the complicated reasons that might fuel their decision.

More like this
Kourtney Kardashian’s Wellness Guru Shares Her #1 Tip For Better Health
By Taylor Jean Stephan
Storm Reid Is A Morning Routine Girlie
By Carolyn Steber
The Crab Walk Exercise Improves Your Posture & Overall Strength
By Carolyn Steber
Bonnie Milligan's Wellness Routine, From Daily Journaling To Drugstore Teas
By Jessica Derschowitz
Get Even More From Bustle — Sign Up For The Newsletter
From hair trends to relationship advice, our daily newsletter has everything you need to sound like a person who’s on TikTok, even if you aren’t.