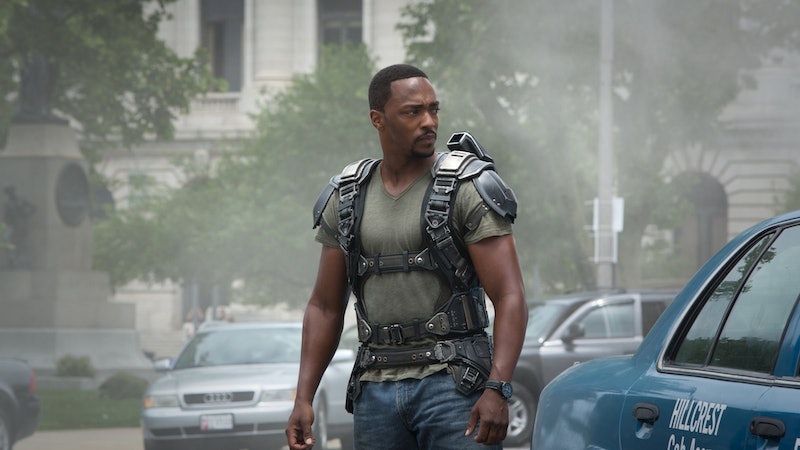 The latest installment in the Marvel Cinematic Universe wrapped up with some of the franchise's most iconic heroes giving up their roles as guardians of the universe. Spoilers for Avengers: Endgame ahead. Now that the film has been out for a few weeks, the directors are ready to clarify a few important decisions that have been on every fan's mind since the credits rolled. In a recent interview, the Russo brothers explained why Falcon got Captain America's shield in Endgame and not Bucky, as some fans had expected, and their reason makes a lot of sense.

After undoing the big snap and defeating Thanos (Josh Brolin) in the most recent Marvel film, the Avengers sent Steve Rogers (Chris Evans) back in time to replace the Infinity Stones and thus, avoid completely fracturing the past. However, instead of returning back to the present, as he was supposed to, Steve decided head to the 1940s in order to reunite with his great love, Peggy Carter (Hayley Atwell) and live out his life the way he never could before. That decision meant he arrived in the present day as an old man, and passed his shield on to Sam (Anthony Mackie), making the former Falcon the new Captain America.

The moment was incredibly touching, but there were some fans who felt that Steve's best friend, Bucky (Sebastian Stan) should have been the one to inherit the title, rather than Sam. And while the Russos considered having Bucky take over as Cap — as he does in one universe of the comic books — they ultimately decided on Sam, because, according to Anthony Russo, he and Steve "share this character connection."

During an interview with the Entertainment Weekly radio show on SiriusXM, Anthony explained that there was "a lot" of discussion about who would end up getting the shield at the end of the film. "There was a lot [of discussion] fueled by the books. There are two versions of who gets the shield, Sam or Bucky," he explained. "And we talked about, it but it became pretty clear to us early on. Cap and Sam just share this character connection."

"Not that Cap and Bucky don't!" Joe Russo — who made a cameo in the film in addition to directing with his brother — clarified. Still, as Anthony continued, "I think the real attraction between Cap and Bucky is that their relationship — they started more as opposites, and that's how they complemented each other. Whereas I feel like Sam and Cap are more kindred spirits."

The director also noted that Bucky's history as the Winter Soldier, which involved being brainwashed by HYDRA and turned into an assassin, played a role in the decision not to make him the new Captain America. "Also — which is important — Bucky has a damaged mind. I don't know if you want to give another weapon to that guy. It could end up being used the wrong way at some point."

Joe echoed that last point, saying, "It makes sense. Bucky has his bionic arm, and that symbolizes who his is as a character. As we've left him in this universe, his mind still can be corrupted and he knows that. He knows he's a potentially dangerous person, and Sam had the same sort of dedication to service that Cap did."

If reading that makes you feel just as sad for Bucky as seeing him get passed over as the new Captain America did, Anthony explained that it's all part of building stakes and making people care about the characters. "[If you feel bad for him], we think that's an important part of the storytelling," he said. "There are real stakes in the storytelling, there are real losses and sometimes the characters lose. It might not be the most fun part of the story, but it helps fuel and give energy to the story overall."

In addition to fueling the plot of future Marvel films, having Sam become the new Captain America rather than Bucky adds a new element to their dynamic, which will be further explored in the pair's upcoming limited series TV show. While very few details about the show, which will air on Disney's streaming service, have been released, the prickly, budding friendship between Sam and Bucky will likely be turned on its head thanks to the events of Endgame, likely leading to a much more interesting relationship.

Clearly, the Russos had a difficult decision to make about who would pick up Captain America's shield after Steve decided to retire. While we'll have to wait until the next installment of the franchise to see exactly what this means for the future of the MCU, at least fans can take comfort in the fact that while Steve Rogers might be gone, Captain America and the Winter Soldier will continue to fight side by side.

More like this
Nicola Coughlan Shared A Lady Whistledown Excerpt From ‘Bridgerton’ Season 3
By Grace Wehniainen, Alyssa Lapid and Sam Ramsden
Zendaya Shares Intimate Photo With Tom Holland To Wish Him A Happy Birthday
By Bustle Editors
The First 'Percy Jackson & The Olympians' Teaser Comes With An Ominous Warning
By Grace Wehniainen
The New Bachelor Will Be Announced Next Week & Here Are The Top Contenders
By Grace Wehniainen
Get Even More From Bustle — Sign Up For The Newsletter