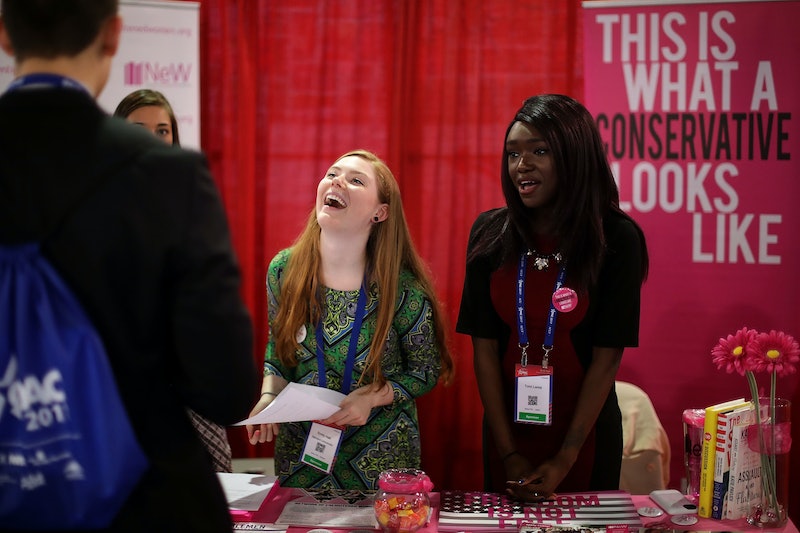 For decades, Democrats have touted themselves as the best political party for American women. At least since the mid-20th Century, the party has prioritized what are often considered "women's issues" — reproductive rights, maternity leave, and access to contraception — and is the only major party to have nominated a woman for president. Still, many women vote Republican, as this past election showed; according to the Edison national election pool, 62 percent of white women cast their ballot for Trump (as did 25 percent of Hispanic women, 3 percent of black women, and 16 percent of non-white women).

While Republicans are often stereotyped as older, there's a contingency of young Republican women, even if they are in the minority. These women do not fit the traditional stereotype of an American conservative — namely older, wealthy men from the rural South — and they don't speak like the stereotypes, either.

"The most common misconception about conservative women is that we don't care about women," George Washington University student Sasha Grujin tells Bustle. "I'm a conservative woman that still cares about women's issues... I do believe women should be treated equally in politics, economics, and in society."

So, why are women like Grujin, who says she "considers herself a traditional feminist," turning away from the Democratic party?

Many of the young Republican women tell Bustle they feel that the Democratic party views them as a collection of identities rather than as whole people.

"One of the biggest reasons I prefer the Republican Party over the Democratic Party is I feel that the Democrats put people into categories... and then try to market issues to said groups accordingly," says Ali Heistand, a student at the University of Virginia. To young conservatives, the very concept of "women's issues" implies that women do not care about issues like the economy and national security as much as men.

"Why am I only being targeted with ads about birth control and abortion, as if those are the only things that concern me?" Hiestand asks.

Moreover, some women support the GOP not in spite of its position on abortion, but because of it. "The Republican Party very explicitly speaks to many of my concerns as a young woman," Fordham University student Dominique Marino tells Bustle. Among these concerns, she says, is her opposition to abortion. And Marino is not alone. While a 2015 Gallup poll found 54 percent of American women identified as pro-choice, that means nearly just as many don't.

To Marino, anti-choice does not mean anti-woman. "There is an unfair equating of not supporting abortion and not supporting women," she says. "In my opinion, it is erroneous."

Some young conservative women tell Bustle they feel the Democratic party describes women as victims. Grujin calls it the "'world is out to get you'" mantra.

"The Democratic Party claims that I do not know what is best for my own health care, for my own income, for my own personal, self-defense, or my own buying practices," says Truman State University student Annorah Harris.

Why am I only being targeted with ads about birth control and abortion, as if those are the only things that concern me?

For this reason, some young women find the right significantly more empowering than the left. "My favorite part of the GOP is that we want to work for what we want. We don't expect good things to be gifted to us," says George Washington University student Juliette Erath.

Truman State student Rachael Newton says she isn't worried about sexism holding her back as she aims to achieve her goals. "I truly believe that America in 2017 provides an equal playing field for men and women," she tells Bustle.

It is a sentiment echoed by former presidential candidate Carly Fiorina, who declared during a 2015 Republican primary debate, "We ought to recognize that women are not a special interest group. Women are the majority of this nation... and this nation will be better off when every woman has the opportunity to live the life that she chooses."

The implication that structural sexism has ended is, to say the least, controversial. Shortly after the debate where Fiorina made that claim, Slate's Christina Cauterucci fired back, "As long as women are getting paid and promoted less than men, working mothers denied proper leave and child care, and women's bodies and clothing policed by authorities, women will remain a special interest group."

Still, for some young Republican women, they feel the GOP is the party that best fits how they want to be seen by the country and the world.

More like this
25 Inspiring Quotes From Black Women To Celebrate Black History Month
By Kyli Rodriguez-Cayro and JR Thorpe
24 History-Making Black Women You Probably Didn't Learn About In School
By Ayana Lage and JR Thorpe
Watch Jacinda Arden’s Devastatingly Honest Resignation Speech
By Sam Ramsden
The UK Government Is *Finally* Banning Conversion Therapy
By Sophie McEvoy
Get Even More From Bustle — Sign Up For The Newsletter
From hair trends to relationship advice, our daily newsletter has everything you need to sound like a person who’s on TikTok, even if you aren’t.