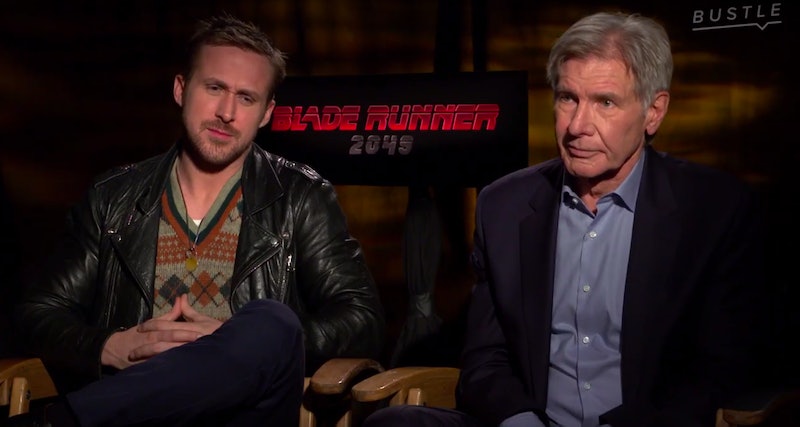 While the Ryan Gosling-starring film Blade Runner 2049 is set just 32 years into the future, it presents a reality much different from our own. A dystopian wasteland, the setting offers a version of the world where it snows regularly in Los Angeles and replicants (robots) are so similar to humans it's hard to tell the two apart. But in real life we can safely assume it will still be sunny in LA for the foreseeable future. However, there are some startling predictions about the future of artificial intelligence that could truly come to be. At the Los Angeles press day for Blade Runner 2049 the cast and director of the film, out now, reacted to some of the most outlandish theories about AIs. And it's safe to say that Harrison Ford isn't too worried about sex robots that could kill you.

A bit of explanation: Last month the The New York Post reported that sex robots — which yes, are robots designed for humans to have sex with — could actually be programmed remotely by hackers to kill their owners. Dr. Nick Patterson, a cybersecurity expert, told the publication: “Hackers can hack into a robot or a robotic device and have full control of the connections, arms, legs and other attached tools like knives or welding devices," he said. "Once a robot is hacked, the hacker has full control and can issue instructions to the robot.”

The idea is, obviously, down right terrifying, especially for those who own said sex robots. But Ford, along with co-star Gosling, don't seem to be concerned about hacked sex robots in the slightest. When presented with the idea, Gosling asked, while looking at his imaginary watch, "When is this supposed to happen?" And Ford did the math, saying, "not gonna be a problem for me."

Though the year 2049 seems far away, it's only three plus decades into the future, and many of us — perhaps even Harrison, too — will be alive when that date rolls around. This isn't to say killer sex robots will be a genuine threat, but it certainly seems like more of a possibility in the year 2049 than now.

Because all jokes aside, the impending threat of robots could creep up on us sooner than we realize. And with some experts predicting human-robot marriage could be legal by the year 2050, this could — as strange as it seems — affect more people than we realize. Patterson continued to say: "The last thing you want is for a hacker to have control over one of these robots. Once hacked, they could absolutely be used to perform physical actions for an advantageous scenario or to cause damage.”

Tesla CEO Elon Musk said in July at the National Governors Association that he has fears about how fast AI technology is moving. "You can see robots that can learn to walk from nothing within hours, way faster than any biological being," he said. "I have exposure to the most cutting edge AI, and I think people should be really concerned by it. AI is a fundamental risk to the existence of human civilization... AI is a rare case where I think we need to be proactive in regulation than be reactive."

But MacKenzie Davis, who plays a sex worker named Mariette, isn't scared of this bonkers theory for another reason entirely. "That's always a risk you take whenever you go to bed with someone," she reasons.

Well, there you have it. Sex is already risky enough — let's just hope sex robots with the ability to kill us stay far, far out of the realm of reality — and our bedrooms.

More like this
On 'The Handmaid’s Tale,' Christine Ko Fights Back
By Gretchen Smail
Jinkx Monsoon Is About To Get Real Sketchy
By Sam Ramsden
The New Bachelor Will Be Announced Next Week & Here Are The Top Contenders
By Grace Wehniainen
Ramin Djawadi Is Living Out His Dreams
By Rebecca Long
Get Even More From Bustle — Sign Up For The Newsletter