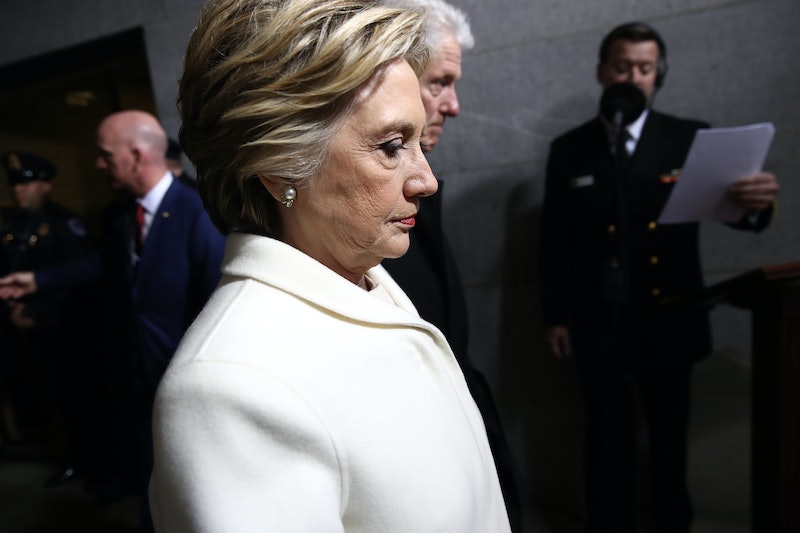 The swearing-in of Donald J. Trump has concluded. He's the 45th president of the United States. And while the Trump team has a notoriously difficult time drawing big names, there was one high-profile attendee who generated a lot of attention. And for some of her supporters, her presence was a bit of a slap in the face ― there are plenty of reasons why Hillary Clinton shouldn't have gone to the inauguration, even though she was well within her rights to do so.

With the Women's March on Washington taking place tomorrow, and the swell of impassioned protest and opposition to Trump's administration on the grassroots left, it's no surprise that the sight of the vanquished Clinton has roiled some people on the progressive left. While countless people are now using the language of resistance to frame their opposition to the incoming president, to see the Clintons ― Bill and Hillary alike ― standing astride the swearing-in sent a very different message.

You've probably heard this before, but perhaps the most encouraging aspect of how many congressional Democrats boycotted the event ― and perhaps the biggest disappointment in Hillary's attendance ― is all about normalization. Namely, will Washington, D.C. be lured into all the usual pomp and circumstance, overlooking the fact that Trump is the least popular incoming president of the modern era?

Overlooking that he behaved so abhorrently throughout his campaign? Injected positively toxic, destructive amounts of racism and xenophobia into the political mainstream? That he ran, in simple terms, the first truly authoritarian American presidential campaign to end in a victory? That he was accused of allegedly sexually predatory behavior by more than a dozen women, with the different allegations spanning decades? (Trump has denied all the allegations, denouncing his accusers publicly as "horrible liars" and saying "the events never happened," denials which are now the basis of a defamation suit against him.)

Remember, while it ultimately proved electorally ineffective, Trump's denigration of women was one of the cornerstones of her campaign, with dramatic ads showing young girls being tormented by Trump's crude, publicly blared insults.

The way President Trump comported himself during the primary campaign, the general election, and the transition have thrust one of the big lies of the last year-and-a-half under the microscope: There is no other Trump, no more respectful, sedate, calm-headed leader who's going to emerge. Rather, he is who he is, and millions upon millions of progressives and Democrats around the country agreed that who he is is someone who should never be president. Not to belabor the point, but he also lost the popular vote by nearly 3 million votes.

Perhaps the purest and simplest reason Clinton shouldn't have shown up? As a show of solidarity with her millions of voters. While there's been no official word yet on whether she'll pay a visit to the Women's March on Washington the day after the inauguration ― something that would surely mean a lot to many of her supporters ― it would certainly seem unlikely in light of her attending the inauguration. It's tough to protest and denounce today what you were smiling and applauding yesterday. And frankly, for someone who staked her campaign so heavily on her reputation as a fighter who never gives up, it's hard to see attending Trump's inauguration as anything but laying down.

If there were ever an inauguration to skip out on, it's this one. For anyone to show up, much less Hillary herself (who Trump repeatedly called to be jailed throughout his campaign) sends two crystal-clear messages. Both that the transfer of power and official celebration are important enough to set aside differences ― an arguably virtuous position ― but also that there really is nothing that goes too far. If you'll show up to Trump's inauguration, in other words, you'll show up for anyone's.