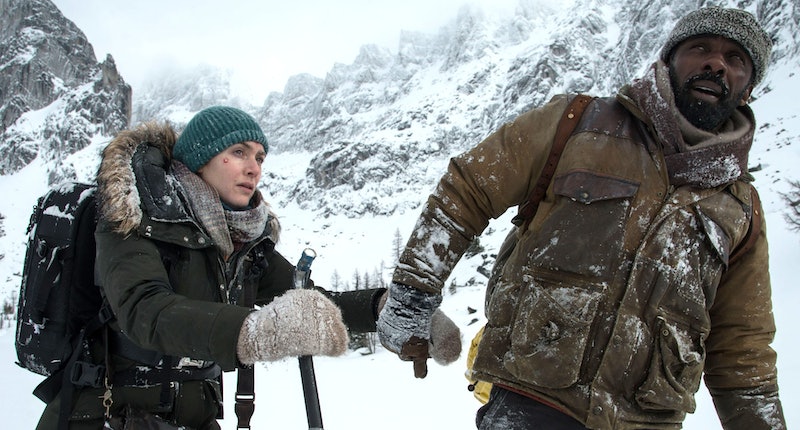 The Mountain Between Us, starring Idris Elba and Kate Winslet as unlikely romantic partners due to a plane accident in the middle of snowy nowhere, could be one of the most important films of the year. Not because of its story, but because of the fact that it stars an interracial couple, a relatively rare occurrence in Hollywood. Even better, though, is that the film shows a black man with a white woman, a type of interracial couple that's practically never shown on-screen.

Making movies featuring interracial relationships hasn’t been a walk in the park for Hollywood thus far, as the history of black male/white female romances depicted in media is fraught with issues. Recall all the times that Sidney Poitier portrayed one half of an interracial relationship in films like To Sir, With Love and Guess Who’s Coming to Dinner, for instance. In these movies, Poitier took on the archetypal leading man roles that usually went to the Tony Curtises and Cary Grants (i.e. white men) of Hollywood. However, some of the choices Poitier had to make in playing these characters shows how perfect they had to be to be deemed as roles that “transcended race.” To do the seemingly impossible, Poitier had to portray the model black man — thin, good-looking, accented, intensely intelligent, and culturally exotic.

Interestingly enough, these are also the qualities that Elba — and his character Ben in Mountain Between Us —possess in spades. Not only is Ben attractive and sophisticated, but he also happens to be a doctor, convenient for a disaster film that requires the male lead giving the female lead medical attention. Ben is a role that could have gone to the Tom Hardys or Michael Fassbenders of Hollywood, or even Leonardo DiCaprio as a marketing ploy for die-hard Titanic fans. But instead, the role went to Elba, and it’s satisfying to see him as the lead in a romantic film.

And he's at least allowed to actually be romantic. Poitier, meanwhile, played a love interest to several white characters in his film repertoire, yet was hardly ever shown kissing any of them. The audience was supposed to believe that the couples got by on a chaste relationship, which didn’t make sense then and certainly doesn’t make sense now. But for Hollywood (and many parts of the country), it was shocking enough to see a black man presented as equal to a white woman, much less as a viable partner. To see them kiss would have been a bridge many viewers weren't ready to cross.

Apparently, they weren't ready for it in 1993, either, when Denzel Washington, Hollywood’s designated heir-apparent to Poitier’s legacy, starred opposite Julia Roberts in The Pelican Brief. If the role had gone to George Clooney instead of Washington, the clear chemistry between the two characters would have likely grown into a full, sexual relationship. However, despite the same chemistry being present between Washington and Roberts, the two never kiss. At the most, they hug, and even that act of affection seems stilted, as if no one could handle either of them showing any sizzle.

Thankfully, Elba and Winslet do, in fact, get it on in The Mountain Between Us. And whether you realize it or not, there is a lot riding on this fact, and this movie. With real-life interracial relationships increasing from three percent in 1967 to 17 percent as of 2015, according to the Pew Research Center, this film could be the representation many couples have been looking for. Interracial relationships of any type are hardly shown on television and film; in 2017, the most notable black/white romance on TV is still Helen and Tom Willis from the 1970s sitcom The Jeffersons.

The Mountain Between Us has a lot to prove to its audience due to this history, especially in how it handles Ben's character. He is the archetypal leading man, yes, but that doesn't mean he should be constantly coming to Alex (Winslet)'s aid and fulfilling that tired stereotype. In promotional videos, Ben is seen as less of a romantic interest and more like Alex's protector, and not in a “noble prince” way. It almost seems like it’s supposed to be Ben's duty to protect Alex from dying, despite both of them needing to help each other. In fact, a video ad for the film outright labels Ben as “Protector,” with Alex looking on helplessly, as a white fragile maiden is supposed to.

Even Ben's wounds don’t appear to bother him, despite the fact that both he and Alex were in the same disaster and should have both come out banged up. If Alex could have her leg broken, Ben should have had a broken bone or two as well. But he doesn't, likely because for the purpose of the story, Ben has to be the one who guides them to safety and saves Alex. He has to do most of the legwork.

There are some moments in the film when Alex actually helps Ben out, and as a few action scenes prove, she can hold her own (at least when she’s not incapacitated). But you wouldn’t know it from the movie's marketing, which utilizes tired tropes to showcase Ben's savior side. According to the ads, we’re supposed to insert ourselves in Winslet’s spot, because who wouldn’t want to be rescued by Elba? In fact, fans can literally insert themselves, replacing Winslet in the Mountain posters with themselves.

This is troubling, and it's also odd, considering that Winslet has a slightly bigger role in the film than Elba. As David Edelstein notes in his Vulture review, the book the movie is based on is told from Ben's point of view, but the film "slightly favors Winslet." The change might have been done to fall more in line with Hollywood’s awakening desire to show films from the female perspective, but the twist in POV, and Elba's "protector" role, are still problematic. Yes, the "macho man" archetype is common for these types of movies, but if you inject racial politics into the equation, the focus on Elba as the “Protector” could also read like a subtle callback to a “domesticated buck” stereotype. In that stereotype, the black man has been “broken” to be acceptable and respectable, but remains just wild and dangerous enough to survive brutal environments and wounds without batting an eye, all while titillating the senses.

There is a sexual currency within this stereotype that can be used for and against black men, particularly in interracial dynamics, and it seems like some of that currency is playing into The Mountain Between Us. The movie's biggest flaw, as the marketing makes clear, is that it undersells Elba's character at the expense of propelling a fantasy. Ben's sex appeal is used to lure the audience in, but instead of us understanding how scared and desperate he might be after the crash, we instead see him hiking up the mountainside, finding whatever he can to help protect Winslet’s character. He’s not shown feeling fear, at least in the promotional materials — he’s only shown as determined, which is less of an emotion and more of a course of action.

Again, Poitier’s film career can be used as an example of how and when black domestication and black exoticism are deployed to propel certain ideas about white womanhood and black manhood. In Lilies of the Field, Poitier played Homer Smith, a traveling handyman who stumbles upon some nuns trying to build a parish in the middle of nowhere. He's coaxed into helping them build the parish and work the land, but his value comes not from his personality, just from his brute strength; he’s only needed because of his knowledge of the land, his skill in building, and his good looks. Even the nuns titter over seeing Poitier at work in the field, ogling over his black manliness.

In The Mountain Between Us, Alex is seen, at times, looking up in awe at the man pulling her through the snow and coming to her rescue. Yet thankfully, she, not Ben, is the one who has to be "broken," since she has to cede control over to him due to her busted leg, and it's also due to Winslet and Elba's acting that the film isn't schlock but fun, standard escapism. It'd doubtful that the movie's filmmakers were actually trying to assert some type of negative agenda with the characters' roles, and there will likely be many couples, interracial or otherwise, who come away from the film feeling satisfied and, indeed, seen. Despite the flaws, The Mountain Between Us does have the power to give couples who rarely see themselves represented a meaningful night at the movies.

However, The Mountain Between Us is just one film; there are many more films and TV shows that need to be made before the varied experiences of interracial relationships will be fully explored. This movie is a significant part of that conversation, and despite its flaws, whatever conversations it sparks about its central romance and racial stereotypes are most certainly worthwhile ones to have.