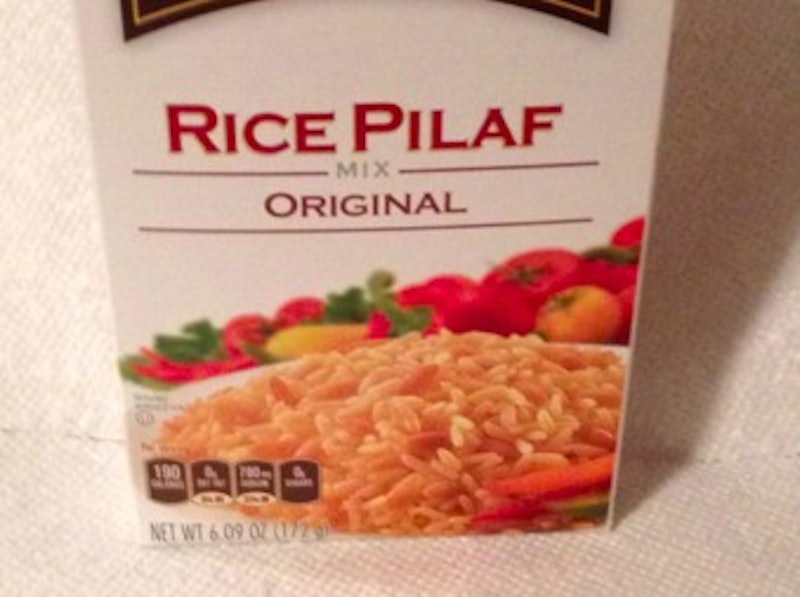 On Sunday July 16 and Monday July 17, the Los Angeles-based Museum of Broken Relationships will be in New York City. In celebration of Bravo's new series, A Night with My Ex, which premieres July 18, The Museum of Broken Relationships will be in NYC for the first time ever for their two-day pop-up installation in Flatiron Plaza at the corner of Madison Square Park. The EXhibition, as it's entitled, will feature donated items, from real people, that represent a breakup. And, yours truly, will be donating a symbolic item to the exhibit. My symbolic item? A box of rice pilaf.

I fell in love for the first time at 21. I don't mean the puppy love that I had for my high school boyfriend, but real love; my first taste of adult love so to speak. Timothy, this first love of mine, was a vegetarian with a penchant for rice pilaf. I'd never before, nor since, met a guy who had such a deep love and appreciation for rice pilaf. Sometimes he'd make it plain, sometimes he'd toss in fresh vegetables, other times he'd toss in a medley of spices from the spice rack, spices that probably should have never been combined, while other times he'd just load it up with garlic salt until his tongue burned. And, because I loved him, I found this rice pilaf obsession (because it was indeed an obsession), the most adorably charming thing in the world. I loved knowing that I'd grow old with that rice pilaf-loving boy.

But we didn't grow old together.

After we broke up, I was devastated. It was my first gut-wrenching breakup and one that I was sure I'd never survive. I remember lying in bed feeling my heart actually breaking inside. I lied in bed for a long time after losing that one; a very, very long time.

But once I was able to pull myself from my bed and out of my bedroom away from the same five sad songs that I played on repeat, the first thing I did was buy a box of rice pilaf. Because I knew he'd return, because he had to return, I wanted to make sure I had a box of it for him. I placed it on the highest shelf, out of reach, but toward the edge of the shelf so I could also see it perfectly. My roommate was warned not to touch it. Even if we were stuck in a blizzard and ran out of food, we'd have to eat each other first, before I'd let us eat Timothy's rice pilaf.

When I moved out of that apartment a few months later and into a new one, I brought the box with me, again putting it on the highest shelf. When I moved back to my parents' house for a bit after college, I brought it there, too. It also followed me when I moved to New York City and the three different apartments I lived in there, each time taking its place in the same spot in the kitchen. I refused to throw it out or leave it behind. It had to exist in my kitchen for his return.

About five years ago I got a text from Timothy. He was leaving the city to move to another state. We had seen each other a few times over the years because we were both living in New York and he worked at a bar not too far from my apartment.

I invited him over that night, the night before he left the city for good, for a drink. We talked until the sun came up and when I went to work a couple hours later, I let him sleep in, knowing he had a long drive ahead of him. When I got home from work eight hours later, he was gone. On the kitchen table there was a note telling me he'd text soon and that he'd always love me. He also apologized for stealing a couple of pens (we both have a thing for really great, artistic pens), and eating my "last box of rice pilaf;" the box that I had been hanging on to for over a decade that was meant for him anyway.

Later that day, I bought another box. Again, placing it on the high shelf, out of reach, but within sight, so it could wait for his return just like the box before it. It's that box, however, that I'll be donating to Bravo and the Museum of Broken Relationships Present: The EXhibition. I no longer need it, but I'll never be able to throw it out. Instead, I'd rather have it be part of an exhibit about love and loss. I can't think of a more perfect place for it to go.