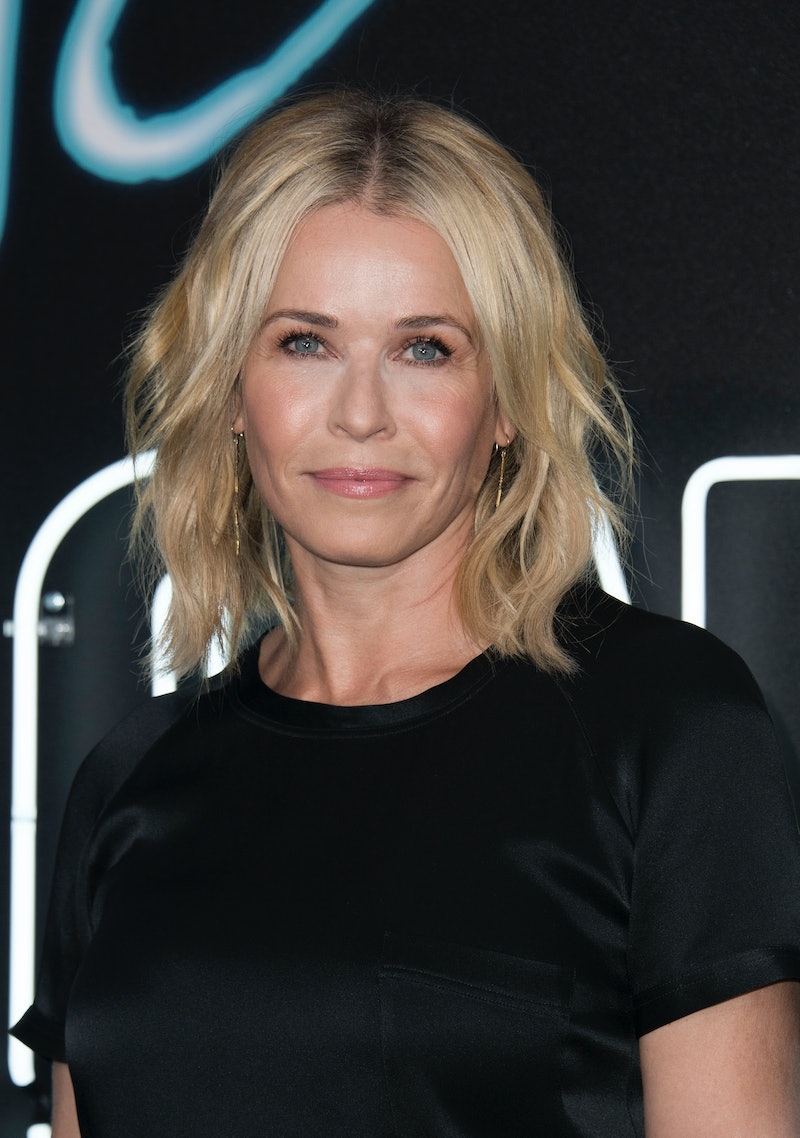 After two seasons, Netflix announced that their weekly talk show Chelsea is ending at the end of this year. But don't feel bad for the host — it was actually her decision to stop doing the show. Chelsea Handler revealed why she's leaving Chelsea on Wednesday. She's decided to focus on activism, citing Donald Trump as the catalyst. In an Instagram post, Handler wrote,

"Like so many across the country, the past presidential election and the countless events that have unfolded since have galvanized me."

It's something anyone who watched Handler's show certainly knew. Throughout the 2016 election, she was unwavering in her criticism of Trump. Back in July, she even devoted a six-minute segment to the then-presidential candidate called "What's Wrong With Donald Trump." After Trump was elected, Handler continued to go after him, often with a little humor. Sometimes she goes after him personally, like a video from May in which she refuted Trump's claims he's being mistreated by the media. Other times, she takes aim at his policies. One of her latest videos, a Viagra ad in Trump's America, goes after his decision to roll back the birth control mandate.

But as it turns out, Handler didn't want to be all talk and no action, especially since, as she wrote on Instagram, the upcoming elections will "mark a defining moment for our nation." Knowing that, she wrote that she wants to "devote as much time as I can to becoming a more knowledgeable and engaged citizen and to focus on projects that have significance to me."

This new direction from Handler includes writing a book and working on a documentary that will continue her partnership with Netflix, who she wrote "could not be more understanding" about her decision to end the show.

With the upcoming documentary, which does not have an airdate as of now, Handler plans to "engage with people I don’t talk with enough – people of different ethnicities, religions and political philosophies." Previously, she also moved out of her comfort zone with last year's Netflix documentary series Chelsea Does, which had her exploring topics like marriage, racism, drugs, and Silicon Valley.

When it comes to what she wants to achieve with this new venture, Handler wrote,

"My goal is to be better informed, raise my voice, and participate in a more meaningful way. I want to travel the country and visit areas and people I don’t know enough about, speak at colleges and listen to students, and gain a better understanding of our political divide."

To get that better sense of understanding, Handler wrote that she's "joined forces with EMILY’s List to elect more women to public office, register people to vote, and campaign for candidates who are fighting for women’s rights."

It's something Handler has been doing for awhile now. Back in January, she led the Women's March at the Sundance Film Festival. Joined by women who were in Park City, Utah for the fest — including Jessica Williams, Connie Britton, Aisha Tyler, and Charlize Theron — Handler reportedly told the crowd, "We experienced a huge setback" after Hillary Clinton's loss. "But," she said, "the only thing to do when you have been set back is to step forward, continue to fight and use your voice."

Even then, Handler seemed to be looking toward the future. She told the crowd, which was chanting things like "Donald Trump has to go," that if "there is a silver lining to be found in this past election, it is that it opened our eyes to the amount of work that still needs to be done." Handler is now making it clear that she's willing and ready to put in the work.

For those who are sad to see Chelsea go, though, don't worry. New episodes of the talk show will continue to stream weekly until the end of this year.

More like this
Twitter Is Pouring Out Some Zhampagne As ‘Schitt’s Creek’ Leaves Netflix
By Brad Witter
The First Clip From Netflix’s Queen Charlotte ‘Bridgerton’ Prequel
By Bustle Editors
Here’s Where You Can Stream 'Schitt's Creek' After The Comedy Leaves Netflix
By Brad Witter
Mike Flanagan Teases 'The Midnight Club' In This Exclusive, Creepy Clip
By Grace Wehniainen
Get Even More From Bustle — Sign Up For The Newsletter