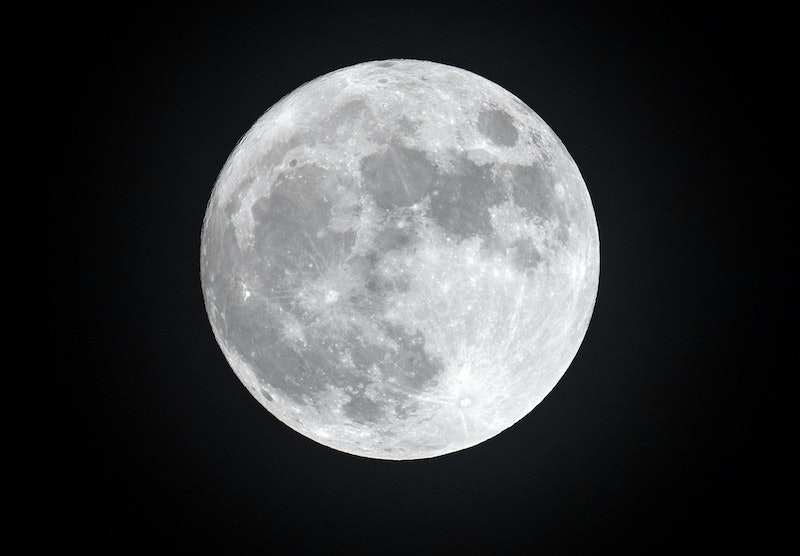 If you're into astronomy, you probably already know that tonight, Feb. 10, we're in for a sweet surprise: It's the full moon! And it has been awesome name, too: The Snow Moon! You might be wondering: Why is it called a Snow Moon, anyway? It's a valid question — although if you've just experienced the blizzard that ravaged the East Coast this week, you probably have a good idea of what the answer might be.

We all have certain associations with the month of February: Valentine's Day, cold weather, and lots of snow. Of course, not everyone in the country gets snow at all, but winter wonderlands are a stereotype long associated with the coldest parts of winter, including January, February, and even March. It's not too surprising, then, to learn that February's full moon is known as the "snow" moon because February is the month certain regions get the most snow.

Those regions are the big clue here: The Algonquin tribes along the East Coast gave each month's moon a name based on shared aspects of culture that would last over time like the weather and crop seasons. For February, it was the snow that leant the full moon its name; however, February's full moon was also sometimes known as the Hunger Moon, February was the month when hunting became most difficult and food supplies tended to dry up.

What time you can catch the Snow Moon depends on what part of the globe you're in. If you're in the eastern part of the United States, you can see the lovely full moon at its peak at 7:33pm EST, meaning that you can catch the full glory without missing out on your much-needed rest (or alternatively, on your fun Friday night out). If you're on the opposite end of the globe, it will peak at 0:33 GMT on Saturday.

Because this is your standard full moon, you shouldn't need any special equipment to view it. You can simply look up into the sky! You'll get the best viewing if you're in an area with low levels of light pollution, so you'll want to venture out of the city and look for wide open stretches of sky if you can.

Happy moon watching, everybody! And remember to bundle up!