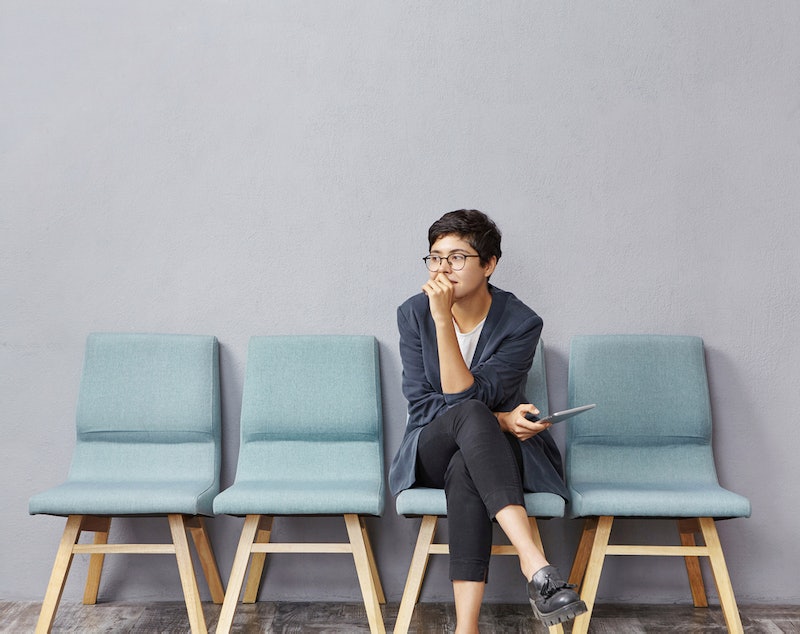 I went on a quest for a therapist a couple of years ago, and it was like the search for the holy grail. I saw three therapists before I found my current therapist, each of whom was worse than the last. It was a serious Goldilocks situation, only I saw three therapists, not just two, before finding the "just right" one — and my mental health was on the line.

But we don’t often talk about it. I’ve heard girlfriends complain about how hard it is to date in New York, where I live, but never once has the topic of conversation been about how hard it is to find a therapist. If you start asking around, though, it turns out that most of us have been there. It’s rare to luck out and find someone who is a true fit on the first try.

“Finding a good therapist in L.A. is like finding a needle in an actual haystack,” Lana*, 29, tells Bustle. “It took work — research, determination, and a lot of just plain-old asking around.” She ultimately found a therapist she likes, but she, too, had to schedule multiple appointments with other ones before she was able to “settle down” with someone.

Ultimately, for me, I had to really click with my therapist. It wasn’t that I was looking for my new best friend — quite the opposite — but I did have to feel like I could tell this person what was really on my mind.

The first person I saw was recommended by a friend of a friend, who swore by her and had been seeing her for years. We had one session, in which I mentioned that I had a piece coming out in the Wall Street Journal. “Oh,” she said, “does that mean I have to buy it? I hate that paper.” A couple more comments along these lines — thoughtless, inappropriate — and I concluded that she wasn’t the one.

The next one I tried was an older man, who was matched with me by an organization that did a short intake and placed me with a therapist. He had a shelf life of about three sessions. During that time, I had just lost someone very dear to me; in our third and final session, he essentially suggested that I get over it, move on. And so I did, but not in quite the way he meant.

My third strike was a woman whom I’d interviewed for Bustle on occasion, and had always admired her wise and helpful advice. At the beginning of our session, she tried to strong-arm me into letting her record it, as she was still finishing her degree. When I balked, she was not gentle or understanding. I should have left right then, but instead I stayed for an uncomfortable and awkward session, then bolted.

When I finally found the right therapist, it was easy. She didn’t say anything odd; she didn’t ask or suggest I do anything I didn’t want to do. She didn’t seem judgmental, but instead appeared to be open-minded. All of these attributes, you would think, would come natural to the territory of being a therapist, but alas. The good ones are out there, though, and if you’re feeling discouraged, I get it. But keep going. And trust your gut.

“Don’t be afraid to ask questions!” licensed marriage and family therapist Michelle Farris, author of Eliminating Codependent Behaviors, tells Bustle. Take the opportunity to get to know your therapist, rather than just the reverse. “You are the consumer, and any good therapist should be willing to answer all of your questions and hopefully explain the therapeutic process, if it’s unfamiliar,” she adds.

Maureen*, 32, who found her therapist last year during a rough patch, agrees with Farris. “Treat a first meeting like an interview,” she tells Bustle. “Why not? It’s your money, your time, your life. You can’t confide in someone you don’t have any feeling of safety with.” Maureen found her therapist by good, old-fashioned browsing the internet. She looked at Psychology Today, and says she spent hours browsing. But her work paid off.

“I wound up having initial phone sessions with three therapists, and spoke with each one for about 15 minutes,” Maureen says. “I chose to book with the one I felt most comfortable with.” It worked — and six months later, she’s still seeing him.

In retrospect, if I could do my therapist search again, I would do what Maureen did. It didn’t occur to me to try having phone sessions first; even if I had, some of these incompatibilities might not have been evident until I actually met with the therapist and had a full session, but it might have been helpful in weeding out the most particularly oil-and-water situations.

Farris suggests going into your first session (or initial phone consult) with a set of questions. First off: “What is their approach to your particular problem?” she says. “Do they focus on changing behaviors and beliefs, or do they focus on the process?” It all depends on what you’re looking for. “Process tends to be more for introspection and increasing awareness, but not as practical,” Farris says. If you’re in search of “specific, practical tools, like how to communicate, handle anger, or stay sober,” be sure to ask if your potential therapist has the ability to teach those skills in their wheelhouse.

No matter what, feeling secure and safe is key. “It’s very important as you know to feel comfortable with who you pick,” Farris says. “If you are uncomfortable for any reason, trust that.” She likens the process to searching for friendship. “Picking a therapist is like picking a trusted friend,” she says. “You need to feel completely safe for it to work.”

I couldn’t agree more. Though my relationship with my therapist hasn’t always been perfect — we’ve worked through a couple of bumps along the way — I always felt like I could talk to her, and express what wasn’t working. I feel as though I can rely on her, and I can see the ways I’ve changed since we started working together. I am grateful to her, and I have used her as an example on a couple of occasions when friends have bemoaned their current therapists. She’s not perfect — no one is — but she has been helpful, and I always feel comfortable in her office. That’s enough for me.

*Names have been changed.

More like this
5 Signs You Have A Toxic Relationship With Yourself
By Lexi Inks
Kourtney Kardashian’s Wellness Guru Shares Her #1 Tip For Better Health
By Taylor Jean Stephan
10 Primal Movement Exercises That'll Improve Your Mobility
By Carolyn Steber
Here’s What Health Means To People In 2023
By Isabella Biedenharn
Get Even More From Bustle — Sign Up For The Newsletter
From hair trends to relationship advice, our daily newsletter has everything you need to sound like a person who’s on TikTok, even if you aren’t.