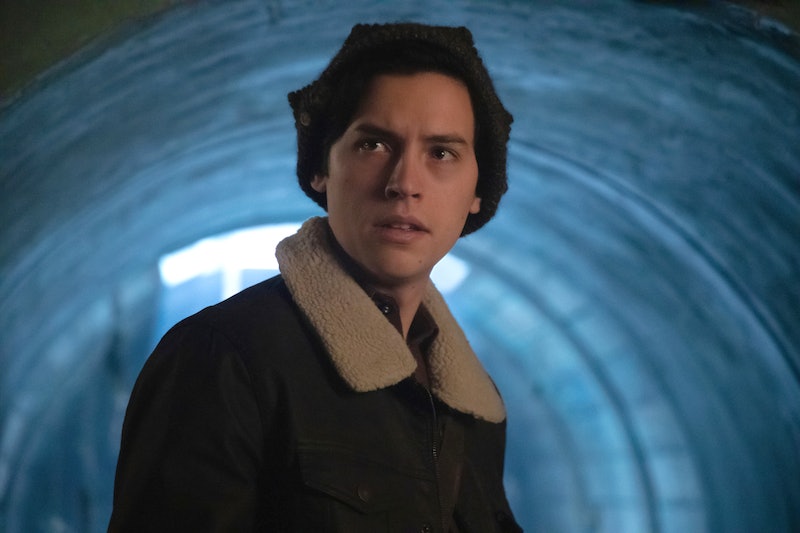 Though Riverdale is really, really trying to convince fans that Jughead is dead, there's one big, blaring clue that he isn't: Jughead is still narrating the show, including the events leading up to and after his supposed death. Logically, how would he be able to do that if he wasn't alive?

The suspect narration started in the "Ides of March" episode, when Jughead narrated over a scene of his lifeless body. "It started out like any other week. Who would have guessed that by Friday night—" he began. Archie then interrupted to finish with, "He's dead."

The Feb. 26 episode also opened with Jughead's narration, this time after he'd supposedly died. "Well it finally happened, the moment we've all been waiting for. A fire in the woods, three friends in their underwear covered in blood, my iconic beanie up in smoke," he said as Archie, Veronica, and Betty took steps to cover up his murder. "Driving back to Riverdale, they didn't say one word to each other. They should have. They should have gotten their stories straight."

The most popular theory to explain this narration is that Jughead isn't dead; he's simply reading from the Baxter Brothers novel he wrote about the perfect murder. And there's some significant evidence to back this up.

Every episode of Riverdale is named with a chapter. For example, Wednesday night's episode title was "Chapter Seventy-One: How to Get Away with Murder." As such, Reddit user imasurvivor2011 theorized that each season of Riverdale has been a book in the Baxter Brothers series that Jughead wrote. Case in point: Jughead's first Baxter Brothers pitch was a story about Jason Blossom being found dead in the river, and that's where Riverdale started. Plus, MeredithofArabia pointed out in the same Reddit thread that other CW shows have used the "it was all a book" twist before (though we won't spoil which ones).

This theory would also explain why Jughead's narration is always in the past tense, suggesting he makes it out alive and turns it into a story — or it was always a story and he was never in any danger. It would be way too much of a coincidence that Jughead wrote about the perfect murder and is now narrating his own. The most perfect murder would be to trick everyone into believing you had been killed only to reveal at the last moment that you're alive.

Of course, the narration could just be the writers' way of keeping Cole Sprouse's familiar voice around. During Season 1, Sprouse told Teen Vogue that he didn't "want to be a trustworthy voice," so perhaps this is his way of breaking the trust he's built with viewers over the last four seasons. It's also possible that Jughead is simply narrating from beyond the grave. Until the truth comes out, though, viewers can still hold onto some hope that Jughead's fate isn't sealed.