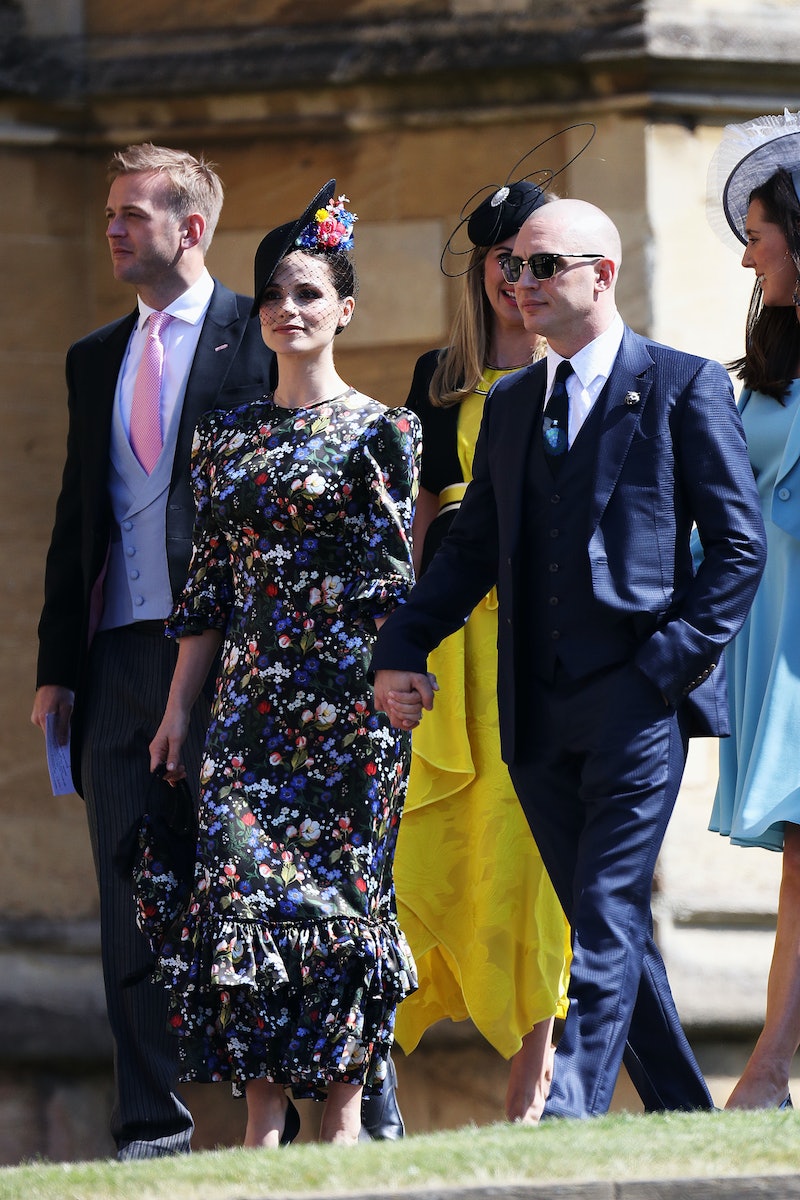 With no official guest list completely confirmed ahead of Meghan Markle and Prince Harry's nuptials, there were several surprise sightings at the ceremony on Sunday. A major one was a bald Tom Hardy, who had prime, nearly front row seating at St. George's Chapel as Meghan and Harry exchanged vows. Aside from how the actor snagged such a clutch invite (more on that later) his haircut was the topic at the top of everyone's mind.

Not too shockingly, the 'do is for a movie role: As the Daily Mail reported on Wednesday, Hardy will play Al Capone in the upcoming film Fonzo, and has been spotted sans hair on and off set for a few months now. Back in March, Hardy posted a teaser photo of himself as Capone on Instagram, with slightly more hair on top of his head and all of the mobster's famous tattoos. Vanity Fair reported that the movie — which is being directed by Fantastic Four's Josh Trank — is centered around Capone's post-prison life, when he returned to Chicago and eventually struggled with dementia. In a 2017 interview with The Daily Beast, Hardy said that the plot is "not Al Capone as I expected him, which is what I really loved about it."

Despite other subsequent Instagram photos that feature longer hair, the bald look is what Hardy went with for the Royal Wedding — and his fans are into it.

Most fans are hugely supportive of the look.

Others are recalling his other bald movie roles, like Bane in The Dark Night Rises and the titular Charles Bronson in Bronson.

But how did Hardy end up on the invite list on the first place? Apparently, he goes back with Prince Harry and Prince William. People spotted them all hanging out at the Audi Polo Challenge in 2016. A little over a year later, The Hollywood Reporter reported that the princes had cameos alongside Hardy in Star Wars: The Last Jedi. Of course, you wouldn't know it: Like many other famous faces in the Star Wars franchise, theirs were all covered by Stormtrooper uniforms. The Daily Mail speculated that the three men appeared in an elevator scene alongside John Boyega, who played Finn in the film.

In addition to their Hollywood roles and sporting events, Hardy became an ambassador for The Prince's Trust in 2010, and has made appearances at the foundation's events since then. The Prince's Trust was founded by Prince Charles Of Wales in 1976 to help disadvantaged young people in the UK, according to the trust's website. In an interview with The Mirror, Hardy explained,

"The Prince’s Trust is a charity that has always been close to my heart. I feel I have much in common with many of the young people I have met passing through its doors; all of whom have left me humbled, and continually remind me about what is important in life. Which is to pass on the message that every individual has value and worth, that the impossible is possible, and that all is not over when the chips are down and times are extremely hard."

Although there's been no confirmation that Hardy and Meghan Markle have ever met, Bustle's Genevieve Van Voorhis points out that "since he and her new husband are basically twins — both Virgos, both from London, both philanthropists — it's likely that they're going to become fast friends, too." With the likes of Hardy — plus George and Amal Clooney, David and Victoria Beckham, Serena Williams, and Oprah — the ceremony seems like it was bound to be a total blast.

More like this
Jennifer Lopez's ‘90s Updo Hairstyle Takes Me Back To Middle School
By Olivia Rose Ferreiro
Ciara On Her Biggest Skin Care #Fail
By Rachel Lapidos
Early 2000s-Era Rhinestone Tattoos Are Back, Baby
By Jordan Murray
The 2022 Emmys' Top Nail Trends
By Olivia Rose Ferreiro
Get Even More From Bustle — Sign Up For The Newsletter