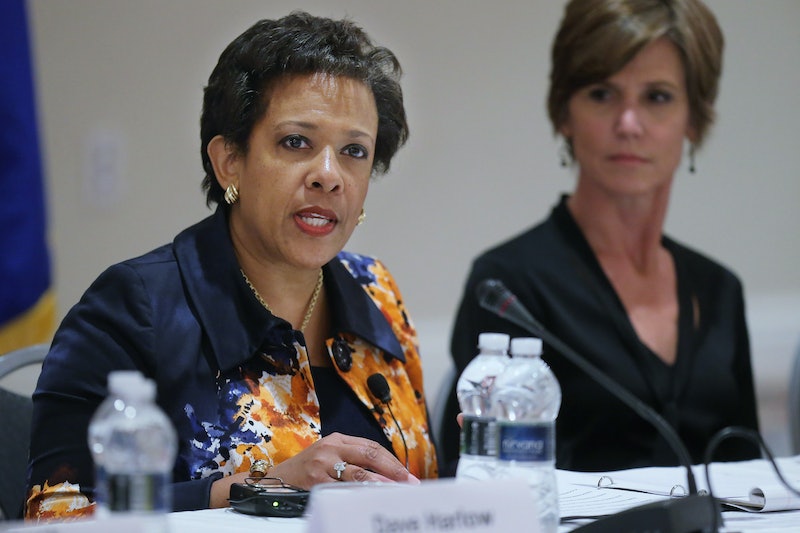 On Monday night, President Donald Trump, in an extreme move, fired Acting Attorney General Sally Yates. She was an Obama appointee who had directed the Department of Justice not to defend Trump's executive order on immigration and refugees. "I am responsible for ensuring that the positions we take in court remain consistent with this institution's solemn obligation to always seek justice and stand for what is right," she wrote to the department, going on to question the legality of the orders. And with that, Trump fired her, drawing comparisons to Richard Nixon. If you're wondering why, look no further than the Saturday Night Massacre of 1973.

That's another big case of "you're fired," to steal Trump's catchphrase from The Apprentice. President Richard Nixon was worried about being caught up in the Watergate Scandal and thus tried to fire the lead investigator on the case, Archibald Cox, who had subpoenaed tapes of key White House conversations as evidence. Nixon didn't like that (the tapes would have proven his connection to the Watergate break-in). So he asked the then Attorney General Elliot Richardson to fire Cox — even though he was supposed to be an independent investigator.

Instead of complying, Richardson resigned in protest. So did his Deputy Attorney General, William Ruckelshaus. Finally Solicitor General Robert Bork,, who became the acting AG, fired Cox. That didn't go over well, though, with the public. They sent a huge number of telegrams to the White House and several members of Congress called for Nixon's impeachment. Nixon ended up appointing another prosecutor to the case who did get access to the tapes that implicated the president. That's when Nixon resigned, rather than be impeached.

The comparisons, particularly on cable news, have been pretty explicit. Trump also fired someone from the Department of Justice for not towing the line. But it isn't quite the same thing. The attorney general and deputy attorney general are usually appointed by the president and would be more or less in line with his views. The special Watergate prosecutor was supposed to be independent.

That said, there are some arguing that this is a teaching moment for the Democrats, and that they must be on the offense from here on out. Julian Zelizer wrote for CNN that "Democrats just need to be willing to engage in hardball tactics. Even if they can't stop the Sessions confirmation, they should put as much pressure on every Republican before they cast that vote." Otherwise there will be no one left to stand up to the administration.

Yates was replaced with Dana Boente, the US attorney for the Eastern District of Virginia. He's not likely to be in the job long if Sessions is confirmed, but he does seem willing to go with Trump on the travel ban. "I am honored to serve President Trump in this role until Senator Sessions is confirmed," Boente said in a statement that the White House gave out. "I will defend and enforce the laws of our country to ensure that our people and our nation are protected." He went on to take back Yates' memo and told the Justice Department to defend Trump's "lawful orders."

Starting with Boente, and likely continuing with Sessions, the DOJ seems to be taking a more subservient role to the administration — and that should be worrisome, whether it's a fair comparison to Nixon or not.