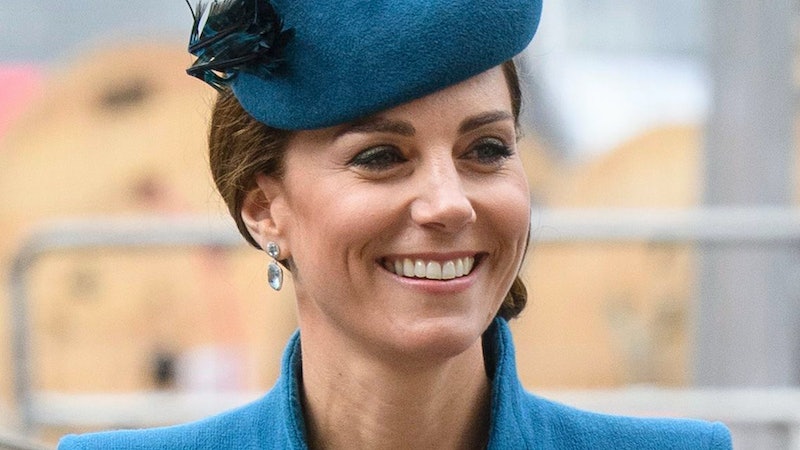 For the past two days, Prince William has been on a two-day tour of New Zealand on behalf of the Queen for Anzac Day — a national day of remembrance for Australians and New Zealanders to commemorate the 1915 Gallipoli landings and those who have served and lost their lives to protect their countries, as the Guardian reports. And if you're wondering why Kate Middleton isn't in New Zealand with Prince William, this is because she will be attending a service for Anzac Day at Westminster Abbey this afternoon where she will reportedly be joined by Prince Harry, according to the Daily Mail.

After reportedly spending the Easter holidays at their country home in Norfolk with their kids, William and Kate's family returned to Kensington for the start of the school term. According to Hello magazine, William flew out on Tuesday (Apr. 23), which was also Prince Louis first birthday but the Duke and Duchess reportedly celebrated Louis' birthday a little earlier so William could be there, along with Prince George and Princess Charlotte who would have otherwise been in school.

Even though William was only in New Zealand for a couple of days, he met with survivors of the recent Christchurch mosque attacks along with their families. Before attending the Anzac Day memorial service, he met five-year-old Alen Alsati who was critically injured during the attacks, as the New Zealand Herald reports. Kensington Palace also posted a video of William meeting the little girl on Twitter, where she asked whether he had a daughter, to which he replied: "Yes I do, She's called Charlotte — she's about the same age as you."

The Duke of Cambridge also met with officers and medics that were first on the scene. As BBC reports, New Zealand police commissioner Mike Bush "was concerned" about how those who aided the victims of the attacks were dealing with what happened. "His main piece of advice was to talk to each other, to not bottle things up — to support each other to talk about what they saw and what they do afterwards," he said. Prince William has experience working in the medical field as he previously worked as a pilot for the East Anglian Air Ambulance service and the RAF's Search and Rescue Force.

According to the BBC, the Duke of Cambridge's visit to New Zealand was requested by prime minister Jacinda Ardern, who believed that the prince would "bring comfort" to the victims of the attacks. "His visit provides the opportunity to pay tribute to those affected by the mosque terrorist attacks and show support to the local and national community." Ardern also described the prince as having a "close connection" to the country as he and Kate conducted their first royal tour there with Prince George in 2014. William also also visited Christchurch in 2011 after 185 people lost their lives in the devastating earthquake. William attended a memorial for the victims, and he also visited parts of the city that had been destroyed as The Telegraph reported at the time.