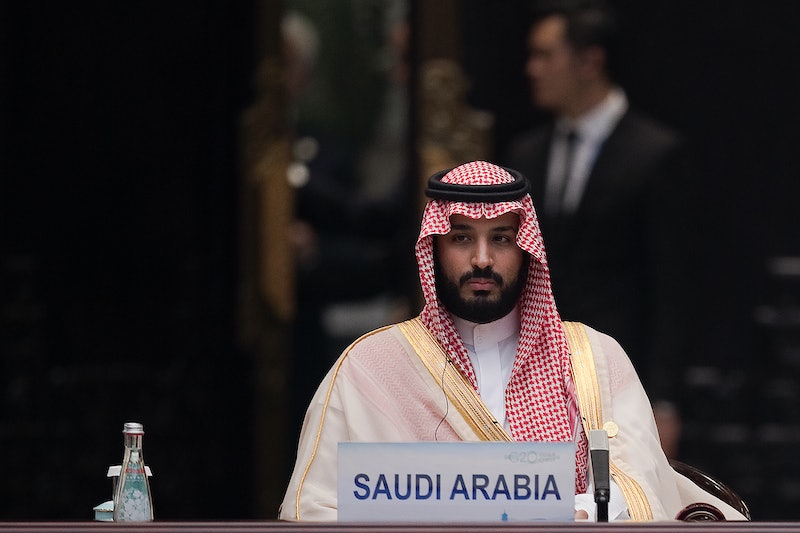 Ever since Donald Trump issued an executive order restricting immigrants from seven Muslim-majority countries, protesters have filled airport terminals and city streets in an attempt to urge reversal. Many critics, like Democratic Rep. Keith Ellison, have argued that the executive order specifically and unfairly targets Muslims, and Trump advisor Rudy Guiliani, who worked on drafting the order, explicitly called it a "Muslim ban" in an interview Saturday with Fox News. But hardly all Muslim-majority countries are on it, and some have wondered why isn't Saudi Arabia part of Trump's executive order?

The absence of several Muslim-majority countries from the list has raised some serious questions. Saudi Arabia is not included in the ban, for example, despite the fact that the executive order repeatedly references the September 11 terrorist attacks — and 15 of the 19 terrorists behind the 9/11 hijackings were from Saudi Arabia. The country is also the birthplace of Osama bin Laden.

So why wasn't Saudi Arabia included with the seven other countries? The banned countries are all included in the Terrorist Travel Prevention Act of 2015, an Obama-era policy that identified nations affected by regional instability. Saudi Arabia is not on that list. However, the TTPA required visas and consulate interviews for foreign nationals to be admitted to the United States, and thus, it was not nearly as restrictive as Trump's executive order stipulations.

While Trump officials have cited the Obama era list as the main justification for their choice of which countries were and were not facing the restrictions, there may be other reasons. Saudi Arabia may be too valuable of an ally for the United State in the Middle East for The Council on Foreign Relations' "backgrounder" page on the country states:

Even as Saudi Arabia diverges from U.S. foreign policy objectives in the region, the combination of common economic, security, and geopolitical interests is likely to maintain strong ties between the countries for the foreseeable future.

Some Trump critics have noted that some of the Muslim-majority countries exempted from the immigration order have business ties with Trump's company, including Saudi Arabia. White House Chief of Staff Reince Priebus denied that the selection of banned countries was influenced by Trump's business ties, saying they were chosen "to protect Americans from terrorists [from] the countries that have already been identified by Congress and the Obama administration."

However, not all analysts were persuaded by Priebus's explanation. Guardian columnist Aryeh Neier speculated that Trump's lack of openness about his business dealings contributes to the uncertainty about his motivations as president:

Does Trump shy away from offending Saudi Arabia because he has business dealings with wealthy Saudis? Or because he expects them to curry favor by patronizing his new hotel in Washington? We don’t know. By refusing to release his tax returns and by refusing to divest himself of his businesses, he raises such questions.

I don't believe that our Constitution allows the president to order State Department and other U.S. government employees to discriminate between otherwise identical people, favoring those from countries he likes because they give him unconstitutional foreign emoluments, and punishing those from other countries that do not pay such personal and illegal tribute to him.

Eisen's reference to emoluments alludes to a frequent criticism of Trump for his failure to fully divest from his own international corporation.

Whatever the reason for Saudi Arabia's exemption, it may be temporary: Priebus also told reporters Sunday that the administration might add additional nations to the controversial ban.