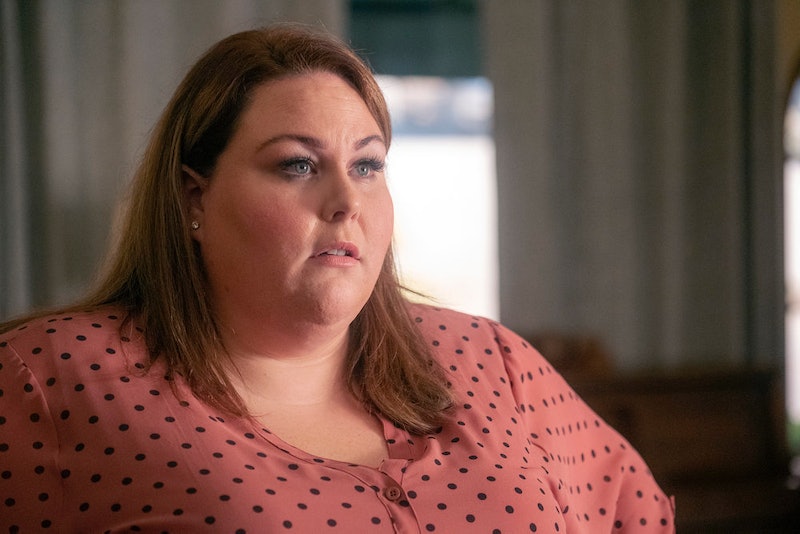 Fans are going to have to wait another week to find out what's going on between Kate and her boyfriend Marc on This Is Us. The show isn't on tonight, Feb. 4 because NBC is instead showing the president's State of the Union address from 9 p.m. to 11 p.m. ET. This Is Us will return on Feb. 11 at 9 p.m. ET with a brand new episode to wrap up the "Hell of a Week" trilogy. "A Hell of a Week: Part Three" will focus on Kate's story in the past and present, with the synopsis reading, "Kate finds strength in unexpected places."

The storyline for the upcoming episode was set in motion by the cliffhangers in Episode 12. In the past timeline, a worried Rebecca Pearson rounds up Kevin and Randall to go rescue Kate from the cabin where she'd run off to with Marc. She and Rebecca had gotten into a fight, and Kate left with her boyfriend but soon called crying from the cabin, prompting Rebecca to go into action mode. A preview for the episode shows teen Kate and Rebecca arguing over Marc who later throws Kate out of his car and leaves her in the woods.

Fans have worried for a while that Marc was bad news, and the next episode will seemingly reveal exactly what his deal is and how it impacted Kate moving forward. "It was definitely a formative relationship and it was a relationship that left serious emotional wounds," This Is Us producer Elizabeth Berger previously told Entertainment Weekly. "We're actually writing the climax of that story right now and it's definitely an intense episode. There are some really intense scenes. Yeah, it's a lot."

In addition to that storyline, the present-day Pearsons will also be going to the cabin to kind of get away from some of their recent struggles. Randall's been dealing with major anxiety ever since his house was robbed, Kevin is struggling to let go of his ex Sophie but also striking up a new romance with Kate's friend Madison, and Kate revealed in the final moments of the most recent episode that she and Toby are having problems. "I'm about two seconds away from my marriage completely imploding," Kate told Kevin before agreeing that they should all meet at their childhood cabin.

Once there, tensions may rise, which could lead to the conflict between Kevin and Randall that a previous flash forward teased. In the future timeline, they're not speaking. This trip to the cabin could be the beginning of why. "Trying to be there for other people when you're going through a lot of stuff is difficult," Kevin actor Justin Hartley teased to TV Line about the next episode, which he directed. "And some sh*t comes out. There's a minor blow-up. Different ways of handling important situations. The fact that Kevin — should I be saying this? I shouldn’t be saying this — there's a problem between Kevin and Randall." He added, "It has to do with the way people handle certain things, and it becomes a dealbreaker situation. It’s massive. There's two sides to the story and they both have their points, and I get both sides."

It's going to be a jam-packed episode that finally starts to explain a lot of important things. We may have to wait a whole week longer to see it, but it sounds like it will be worth the wait.