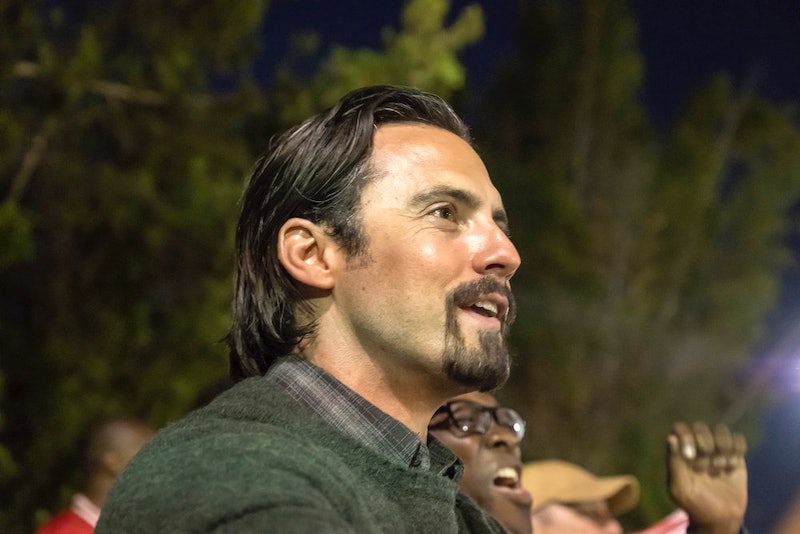 This Is Us Season 2 opened with the reveal that everyone was hoping for — how Jack Pearson died. Or did it? Did Jack Pearson die in a fire on This Is Us? The show set the stage for an easy answer to the mystery surrounding the death of the Pearson patriarch, and for him to have died tragically makes sense, given his age at the time and the way that his children are still coming to terms with it even 20 years later. But the clues that Jack died in the fire aren’t wholly convincing.

It’s worth noting that creator Dan Fogelman has said repeatedly that the fire is not a red herring for Jack’s death. The showrunner told Variety, “They don’t know the details. Did he die in the fire? Did he get out of the fire? But we’re not misdirecting. He didn’t die four years later.” That’s all well and good, Dan, but when did Jack die?

Milo Ventimiglia, who plays Jack, has stopped short of saying that Jack dies in a fire, which could indicate that he doesn't. In an interview with Vulture, Ventimiglia said,

“It would be bad-form storytelling on our end if we were to just give it away right at the beginning. Dan Fogelman’s plan is parceling things out so you’re satisfied in knowing, hey, maybe this burned-down home has something to do with Jack’s death because his wife is grieving and his kids are crying and everybody’s really emotional and Jack’s not there. So, beyond that, it’s to be uncovered in the season.”

And it gets even more confusing from there.

The biggest clue that Jack didn’t perish in the blaze that took the Pearson family home is the fact that his belongings aren’t burned. Jack’s personal effects are on the front seat of the car when Rebecca is driving back to the house after the fire, and they are in a plastic bag. This includes his watch, a ring, and some paper, and they aren't smoke-scorched or burnt or anything. The ring and watch could withstand some heat, but that paper? Nope.

When Jack allegedly died in the fire, Kevin wasn’t with his siblings; he was making out with teenage Sophie. He also had a big cast on because he fractured his kneecap, and that cast must have been on a little while because it was full of signatures and scribbles. At Jack’s funeral, though, Kevin’s cast is nowhere to be seen. That means that Kevin’s cast had to have been taken off after Jack’s death but before Jack’s funeral, and I don’t know that rushing your kid to the doctor to get a cast taken off is exactly a priority if his dad just tragically died. The timelines and circumstances surrounding Jack’s death don’t necessarily point to him dying in the blaze.

But that doesn’t mean that he didn’t die because of the fire. Reddit user oakzap425 suggested that Jack died the night of the fire, but not in the fire. The user writes, “I think Jack died in an accident, maybe rushing home to a call about the fire, and maybe Kate started the fire.” This is a good theory, because Kate said that she caused “it,” the "it" here being Jack’s death. Sure, she could have started a fire that Jack died in, but she also could have set a fire that caused the chain of events that killed her father.

No matter how Jack died, Fogelman puts his death as the most important thing to happen on the show. In another interview with Variety, he said,

"I always talk about Jack’s death as this hinge upon which the family swings, and there’s a kind of before that and the after [of] that. And that’s very much what this season is about. It’s about that hinge, and that’s what we’re watching. There’s a lot of healing to be done."

Those are true words from the man that knows the whole story about Jack — a story that, fire or not, fans want revealed soon.

More like this
How Much Are The 'Schitt’s Creek' Stars Worth?
By Hugh McIntyre
Laenor’s Fate On House of the Dragon Differs from The Book In One Crucial Way
By Kadin Burnett
Rhaenyra's Sons May Not Last Much Longer On 'House Of The Dragon'
By Grace Wehniainen
These Memes & Tweets About Alicent in 'House Of The Dragon' Prove She's The Queen Of Messiness
By Grace Wehniainen
Get Even More From Bustle — Sign Up For The Newsletter