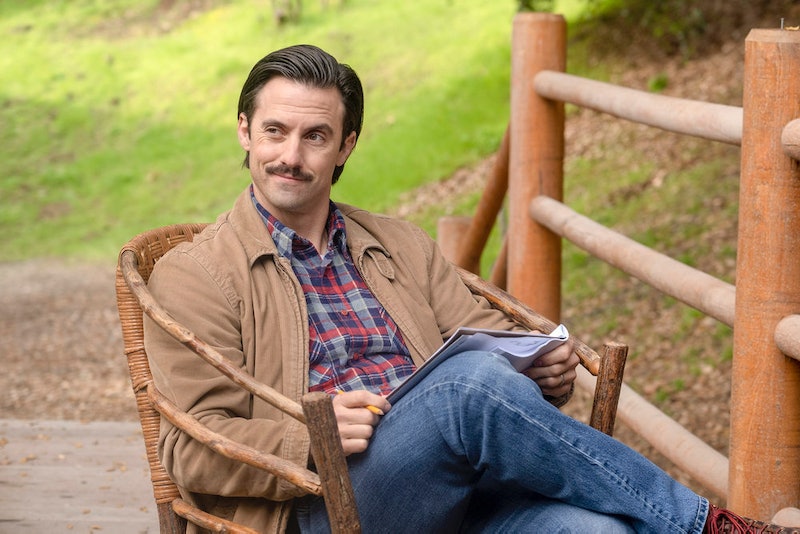 Spoilers ahead for This Is Us Season 4, Episode 14. If you just watched "The Cabin" episode of This Is Us, it's a wonder you can even read this article through all those tears we all shed. The episode was a hugely emotional one. But, for once, they were mostly happy tears instead of sad ones. It all started with a tape Jack left in a time capsule for his kids to find when they were 18. Of course, Jack died when they were 17 and the time capsule remained buried until Tuesday night's episode when the Big Three, now 39 years old, finally dug it up.

At first, they thought the tape had been their mom's contribution to the time capsule. Their dad's drawing of a cabin he was thinking about building was already in the box. But Rebecca was the one who put the drawing in, because she so believed in her husband's vision for their life. Instead, the tape was a message from Jack, and it was heartbreaking. "Hey guys, it's me. Your dad. It's 1993," the tape begins. Kevin, Randall, and Kate all looked shocked.

If you think about it, they probably haven't heard their dad's voice since he died. He died before iClouds that save videos and voicemails and social media accounts that linger on forever. Since he died as the result of a house fire, the Pearsons probably also lost any home videos that may have had their father's voice still on them. That realization alone is enough to make anyone shed a tear, but it only got more emotional from there.

The tape was Jack explaining that he had drawn a photo of a place he had once planned to build on the hill by their other cabin. But he'd been embarrassed about it and thrown it away. However, Rebecca rescued it from the trash and put it in the time capsule as a reminder that she believed in him. Jack realized all of this when he noticed the drawing was no longer in the garbage. "Your mom believes in me so why shouldn't I believe in myself, right?" Jack said on the tape, adding:

"By the time you guys hear this, you're gonna be teenagers and probably even harder on us than you already are. So let me just remind you that your mom is the kind of woman who buries a crappy doodle, because when it comes to people that she loves, she does not mess around."

And just like that, Jack brought his children together once again. They had been arguing over various things prior to that. Kevin was mad that no one told him about Rebecca's memory problems. Kate was mad that Kevin slept with her friend. Kate and Kevin were having an intervention for Randall who was more anxious than usual after that traumatizing robbery a few days prior. But listening to Jack talk about his dreams and how Rebecca respected them brought the Big Three back together. And, for Kevin, it sparked an idea.

As he was leaving from their sibling cabin trip, he looked up at the hill and said, "It sure is beautiful up here, huh? I can see why dad wanted to build that house." Cut to a flash forward where Kevin did build a house there that looked a lot like his dad's drawing. It's actually this house where the flash forwards about the old, sick Rebecca have taken place. And as sad as it is that we know Rebecca gets worse, Kevin did help his father live up to his promise. Jack had said on the tape, "I had this crazy idea to build a bigger house out here for me and your mom to grow old in." It was Kevin who built it instead, but one of the rooms is for Rebecca and she did get to grow old in it, as the flash forwards have shown us.

If you're still not sobbing, there's more. The song that plays at the end of the episode as Kevin gets the idea to build the house is the same song ("To Build A Home" by The Cinematic Orchestra) that plays in the episode when the '90s Pearson house catches on fire. In that episode, Jack died. In this episode, Jack's dreams were realized by his son, and the house becomes a major part of the Pearsons' future in these flash forwards. More of the pieces of the future timeline puzzle will come as the episodes go on, but at this rate who knows if our hearts can even take it?

More like this
'Elite' Season 6 Is Arriving Sooner Than You Think
By Gretchen Smail and Grace Wehniainen
What’s New On Netflix: Ana De Armas’ 'Blonde' & A Nick Kroll Special
By Arya Roshanian
The 'Reasonable Doubt' Cast Includes A 'Save The Last Dance' Reunion
By Grace Wehniainen
Nicola Coughlan Shared A Lady Whistledown Excerpt From ‘Bridgerton’ Season 3
By Grace Wehniainen, Alyssa Lapid and Sam Ramsden
Get Even More From Bustle — Sign Up For The Newsletter