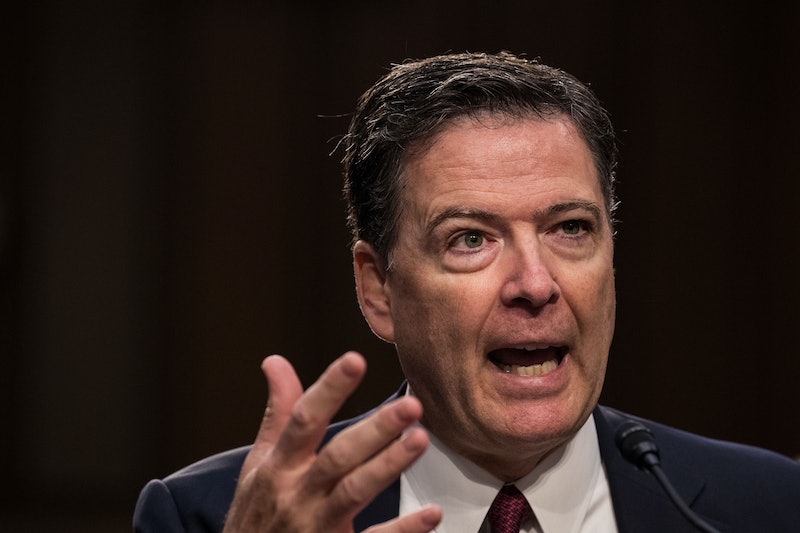 When I was asked to write this piece, I immediately started thinking about what my angle would be. Several excellent reviews of James Comey’s book A Higher Loyalty are already circulating, and we've all had a few days to analyze the available excerpts.

As for me: I haven’t worked in the intelligence community. I’m not a lawyer. What I do know is how to analyze and conduct polls, and how to read national sentiment and the political landscape in America.

It is in that space that I see the lasting impact of Comey’s book: Cultural decay.

I hate that this book is out there because it feels like a symbol that Trump has truly won.

This isn’t a partisan issue. I have no problem with Democrats looking bad because of the book. If there’s more to the Loretta Lynch story, let’s hear it. And I would hope that those on the Republican side are concerned that this president can so easily be described as “unethical, and untethered to truth and institutional values,” as Comey puts it.

I hate that this book is out there because it feels like a symbol that Trump has truly won.

We have become a society where our institutions have been so demeaned, — our level of discourse so lowered, our citizenry so clickbait obsessed — that a man like James Comey, who has honorably dedicated his life to public service, felt the need to write a book that puts him in the same space as Michael Wolff.

But I firmly believe that Donald Trump is the molten center of our cultural decay.

We have become a society that deserves a petulant presidency devoid of ethics. The trappings have been there for a while: There’s a reason millions thought a reality TV star would be a good choice for leader of the free world. It’s not because we’re doing well.

But I firmly believe that Donald Trump is the molten center of our cultural decay. He brings the quality of our great nation down with each stroke of the keyboard. He debases our values and way of life.

The result? People far better than Trump engage with him at his level, and we end up with people like Comey serving as mere fodder for Twitter wars. Indeed, the fact that a guy like Comey thought that writing this book was essential proves out that Trump has brought down the best of us.

We’re discussing salacious details from A Higher Loyalty as we would from Ed Klein’s The Amateur. Of course, that doesn’t mean that Comey’s book isn’t better written, better researched and offers more to society, but it does signify that yet another great American public servant now subscribes to Trump’s theory of counterpunching.

Comey is not alone. Marco Rubio and Jeb Bush tried out immature nicknames during the Republican primary. Paul Ryan has been humiliated every which way. Gary Cohn will go down in history as the guy who drew the line at tariffs, not anti-Semitism and racism.

Trump has actually made me feel bad for Jeff Sessions, a man with political and social beliefs that run so counter to my own that I doubt we could find more than a couple points of commonality. But to see a man who has served his nation for decades publicly humiliated by the president for doing the right thing makes you think. Even someone that would have ICE deport every single undocumented immigrant in the country is getting the raw end of the stick.

In these times, Jeff Flake and Bob Corker have become heroes of the left — even though their voting records don’t align with our traditional values whatsoever. What did they do to earn our love? These days, just call the White House an "adult day care center" and you’re golden, even if you’re opting to retire rather than fight the corrosive forces residing at 1600 Pennsylvania Avenue.

I hate what Comey did to Hillary. I have little sympathy for any sense of guilt he may have about the effect of his decisions on her candidacy. (Yes, she should’ve gone to Wisconsin, but this story is about much more than campaign stops.) And though Comey’s tale is interesting, I cringe when I see his name tarred across Trump’s Twitter account like he was one of the president’s favorite #FakeNews reporters.

Trump is making us all counterpunchers. It is a terrible look for the nation.

More like this
'The Last Of Us' Has Revived The Inspirational "Hopepunk" Trend
By Sophie McEvoy
Twitter Has *A Lot* To Say About The "Single Penalty”
By Sam Ramsden
Watch Jacinda Arden’s Devastatingly Honest Resignation Speech
By Sam Ramsden
What The UK Blocking Scotland’s Gender Recognition Bill Means
By Sam Ramsden
Get Even More From Bustle — Sign Up For The Newsletter
From hair trends to relationship advice, our daily newsletter has everything you need to sound like a person who’s on TikTok, even if you aren’t.