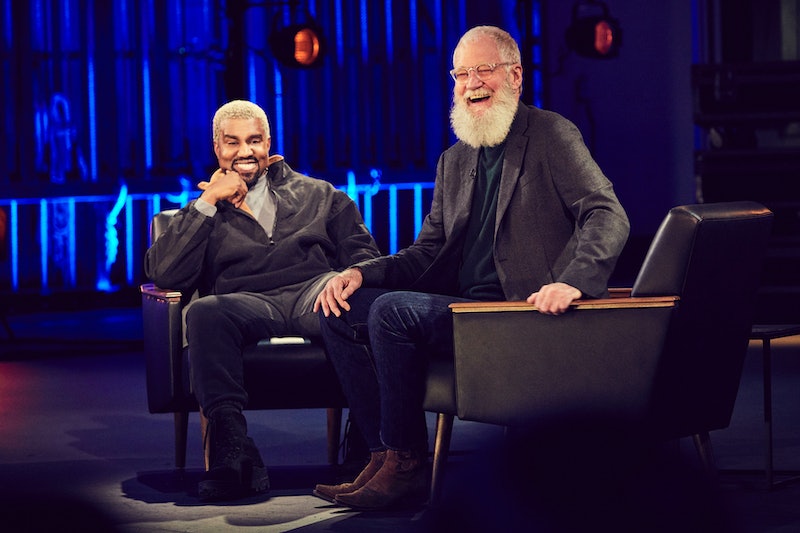 David Letterman has been interviewing people from all walks of life for decades, but he's noticeably anxious immediately before stepping onstage to perform the first interview of the new season of My Next Guest Needs No Introduction with subject Kanye West. His anxiety was perhaps justified, given the heated moments of debate that arose once the conversation turned towards Donald Trump and the Me Too movement, but despite those bumpy discussions the episode ends on a discussion on serenity, peace, and how Kanye West's Sunday Service is connected to his mental health journey.

Sunday Service invokes a church-like connotation, and Letterman's first-hand look into a service session shows that that connection is intentional. West tells Letterman that his literal goal with Sunday Service was "to make a church," which he accomplished by decking out a studio space with a James Turrell-inspired lighting arrangement and a company of musicians. The goal of those who attend Sunday Service, according to West, is to "open up our hearts and make music that we felt was as pure and as positive as possible and just do it for an hour every Sunday and have somewhere where people can come together and just feel good with their families."

West tells Letterman that his current path as a musician is to learn about sonics that can heal people, referencing John Lennon and Bob Marley songs that can supposedly move sand due to their frequency.

It's possible West is referring to 432 Hz tuning, a musical programming technique that supposedly has healing properties due to the specifics of the vibrations emitted from that tuning. West adds that he's super interested in hw music communicates with the body these days, noting that the Roland-TR 808 drum machine commonly used in hip hop creates beats that hit the body "inside of the lowest chakra, which is the sex chakra." West added that the pervasiveness of that sound in music is reportedly pushing people to become more hedonistic in their lives.

West's Sunday Service removes programmed drums like 808's from his music and remixes songs with acoustic percussion and a full choir. The combination of the acoustic, gospel-like performances of West's songs and the zen-like lighting designed to provide a refuge from people getting "hit with all the imagery and the messages and the ideas" that bombard people in everyday life seems to be a respite for West, whose mental health has been a matter of public discussion for a while.

Earlier in the interview, West talks candidly about his view of his own health and talks about what he experiences as "ramping up" towards a point where he would "start acting 'erratic' as TMZ would put it." He talks about a time where his "ramping up" led him to being admitted to a psychiatric hospital where we was reportedly not allowed to have visitors. West adds that because of that experience, he hopes to only bring people together and celebrate togetherness. This seems to be exactly what Sunday Service does for him, his family, and friends. Now how do we get an invite?