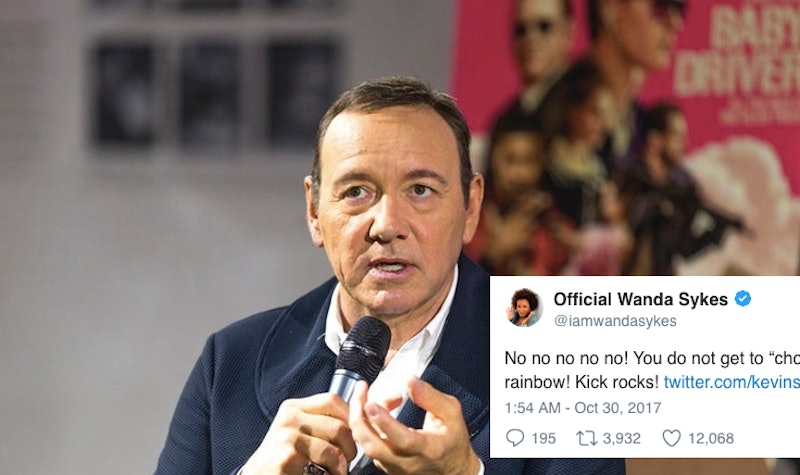 On Sunday, actor Anthony Rapp alleged in an interview with BuzzFeed News that Kevin Spacey made sexual advances toward him when he was 14. In a post on Twitter, Spacey responded to Rapp's allegation, but also wrote of wanting to "address other things" and stated that he lives as a gay man. Spacey's coming out statement was met with anger online, as many saw it as an effort to deflect from the sexual assault allegation. In addition to everyone else who voiced their anger on Twitter, fellow celebrities including Rose McGowan, Wanda Sykes, and Cameron Esposito spoke out against Spacey's response.

The women coming forward recently with allegations of sexual misconduct in Hollywood inspired Rapp to share his claim against Spacey. The Rent actor alleged that Spacey befriended him in 1986 while they were both on Broadway, invited him to his apartment for a party, and at the end of the evening allegedly placed him on his bed and made a sexual advance, which Rapp claims he was able to "squirm” away from after a short amount of time. Rapp would have been 14 and Spacey 26.

On Monday at midnight, Spacey published a two paragraph statement on Twitter addressing the allegation. He wrote that he was "horrified to hear his story" and claimed to not remember the alleged incident, which he said would have been "deeply inappropriate drunken behavior." The post went on to serve as a coming-out for the actor, who revealed that he had been with women and men in his lifetime, but considers himself to be gay.

The statement was met with criticism, and for many, Spacey's statement serves as an unfortunate conflation between homosexuality and assault. People online criticized the evasive response as such:

Spacey's Coming-Out Was Seen As A Deflection

Comedian Wanda Sykes felt that Spacey was using coming out to draw attention away from the accusations.

Writer Yashar Ali pointed out how Spacey's post distracted from the matter at hand.

Rose McGowan encouraged the media to focus on Rapp's allegation.

Activist Deray McKesson pointed out how the actor's statement hurts the LGBT community.

Many others recognized similarities between Spacey's response and the initial statement from Harvey Weinstein in response to the allegations against him, in which he pointed out that he plans to fight the NRA. (Weinstein has since denied all allegations of nonconsensual sexual activity via his spokesperson.)

Writer Dan Savage said that the points made in Spacey's statement, in regard to how drunk he may have been or his sexuality, did not "[explain] away" the allegation of assault on a 14-year-old.

In addition, George Takei told The Hollywood Reporter in a statement,

"When power is used in a non-consensual situation, it is a wrong. For Anthony Rapp, he has had to live with the memory of this experience of decades ago. For Kevin Spacey, who claims not to remember the incident, he was the older, dominant one who had his way. Men who improperly harass or assault do not do so because they are gay or straight — that is a deflection. They do so because they have the power, and they chose to abuse it.

Others Felt The Statement Made A Harmful Conflation

Writer Eve Ewing pointed out how Spacey's statement could reenforce harmful prejudices toward the LGBT community.

Rachel Sklar pointed out that there should be no link made between Spacey's sexuality and his alleged behavior.

Ashlee Marie Preston encouraged critics to stay on the topic of Rapp's allegation, and pointed out how harmful the the conflation between sexuality and the alleged assault of a minor could be.

Kat Blaque pointed out that in no case is assault, or alleged assault, about sexuality.

Film critic Richard Lawson pointed out how Spacey's statement evokes the the long, painful history of prejudice against the LGBT community.

Comedian Billy Eichner was at somewhat of a loss over Spacey's statement, which he, too, felt was dangerous and harmful to the LGBT community.

Anthony Oliveira pointed out how Spacey's statement could allow information to be misconstrued and potentially perpetuate an erroneous and harmful narrative.

Spacey’s statement was not well received, and the actor has not yet posted again since his statement. It’s unclear whether or not he intended to draw as much attention to his coming-out in the statement, but for many, and especially members of the LGBTQ community, the coming-out moment has the potential to be conflated with the alleged assault — and not just because of how Spacey wrote it, but because of the way it is covered in the news.