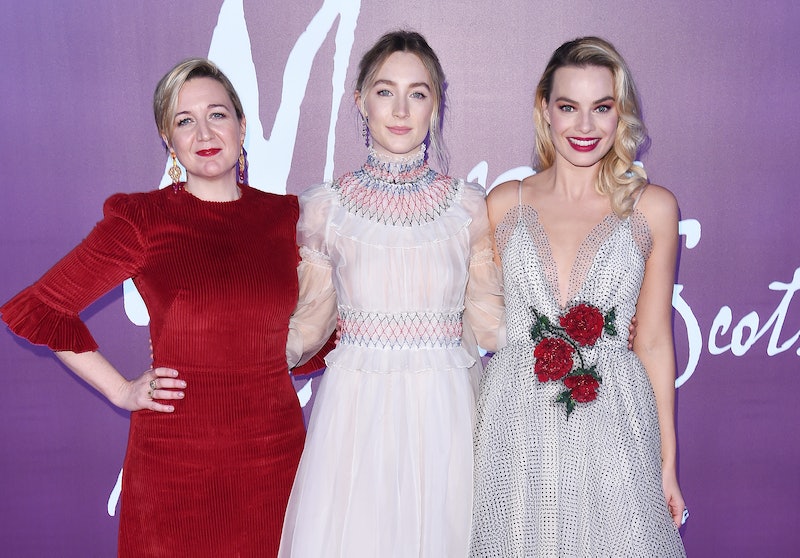 Most women have, at least once, heard their makeup jokingly referred to as “war paint.” Usually, the comment comes from someone who finds it amusing that women can be invested in what products and shades are carefully painted onto our faces, but in many ways the dad joke actually fits. Women often have to dress carefully, taking into account the how their clothing and makeup choices will be perceived in a given setting. And in any moment in which we think we can finally declare those days over, along comes some bro with a Twitter account ready to show us that not everyone got the memo. This enduring concept — the pain, process, and necessity of making oneself ready and “presentable” as a woman — is something Mary Queen of Scots director Josie Rourke deliberately baked into her and Beau Willimon’s nuanced history of so-called rivals Mary Stuart (Saoirse Ronan) and Elizabeth Tudor (Margot Robbie).

The film not only gives screen time to the work involved in creating beauty, but also the reality of women’s bodies, including what it was like for a female monarch to get her period and what the aftermath of birth might actually look like at that time.

“There are some truths and some secrets about our bodies as women that when we tell our stories, it's part of our responsibility to tell the whole of that,” says Rourke when we meet one crisp November morning in Los Angeles. She’s “done up” for a day of interviews, and admits it’s rather ironic that here she is talking about the pain and process of beauty knowing full well that it took her “90 minutes of my life” to get ready for her press day. Her film, on the other hand, makes the effort to recognize the work involved: the cinching, the hours, and the lack of glamour that goes into creating the iconic, frilly statement looks that both monarchs are often depicted wearing.

It’s not necessarily the main focus of the Mary Queen of Scots — its chief aim is to dispel the notion that Mary and Elizabeth were in a years-long “catfight.” But Rourke took steps to make sure that the intimate moments in which both women are alone with their handmaidens, dressing down or dressing up in order to later present themselves to the men who questioned their power, were both present and impactful.

“What's amazing about those moments, as a lot of people know from getting ready, is that they're incredibly intimate and they're often slightly tedious, slightly painful. You have to pull your body in in order to get into those dresses, as they had huge amounts of layers that they wore. And what I really wanted to show was the reality of that, the intimacy and the reality of that for women's bodies,” offers Rourke. “A lot of this film, for me, is wanting to think about women's bodies. These are such an icons, so how do we make them real and break that down? We see them getting dressed or undressed, we see them getting dirty, we see them go for walks, Mary gets her period in the movie — all of those things that we as women, know are really happening to our bodies, but weirdly we have it hardly ever seen on screen.”

But this attention to realistic detail is not just about breaking down these icons, showing them as the actual women they were — with periods and afterbirth and everything else — it’s also about showing the necessary intentions behind all that, well, war paint. “It was a time when those women had to put themselves on display and public. It took them an incredibly long time to put themselves together because that was about display, that was about defense,” she says. In fact, Rourke says she and her costume designer, Alexandra Byrne, took inspiration from another time period in which women dressed for defense — the 1950s and ‘60s, as women were first entering the workplace in full force. “We wanted to think about what it was like for these women to have to be out in public, not just here's a pretty dress," she explains.

Throughout the film, both monarchs are certainly on the defense. John Knox (played to terrifying perfection by David Tennant), who Rourke points out believed that “it was against nature and against God for a woman monarch to be in power,” is on a crusade to discredit Mary by slut-shaming her, riling up religious crowds over her audacious nature, insistence on making decisions for herself, and oh, the fact that she is a woman in power. And that’s all without the bits where she starts to encounter the trouble amongst her most trusted advisors and supposed allies. Elizabeth, for her part, appears to have more control at first, but the film quickly reveals that she’s just a much more careful chess player when it comes to keeping the men around her from wrenching her power away — something that guides her hand at nearly every point of her life, even decisions about marriage and motherhood. By adding the extra layer of behind-the-scenes work that had to be done before these women were even ready to appear in public to fight these constant battles, Mary and Elizabeth’s struggles appear even more incredible.

“I think particularly when you have two women who are as extraordinarily luminous as Margot and Saoirse that you don't just want to see them looking fabulous. You want to see the cost of beauty and the cost of presentation and you want to see the reality of their bodies, because in many ways a lot of this story is about those two women, even as current heads of Europe, fighting to control their bodies,” she says. These women were fighting to be allowed to say, “'I get to choose who I get to marry, who I want to marry, if I get pregnant, if I don't get pregnant, if I have a child, if I don't have a child, how I appear in public, how I get ready, how I present myself, how long I take to get ready,’” adds Rourke. (Elizabeth, for the record, took a lengthy three hours to do so.)

And in a way, this attention to processes that only women ever had to endure and make time for supports another of Rourke’s goals with Mary Queen of Scots: exploring the reasons these monarchs were so “obsessed with each other.” While the story has generally been that these two were simply pure rivals, simply grappling for dominance over one another, Rourke says that their real letters tell another story — this film’s story — when looked at on a more emotional level.

“Imagine you're living at a time when a lot of people think that it's against nature for you to be a queen, when to hold onto your leadership as a woman is incredibly difficult; so [they're] living unbelievable peril and jeopardy continually. Consequently, they are the only two people on that island who know what it feels like to do that job. So I'm not remotely surprised that they were obsessed with each other,” she says. “Can you imagine if there was only one other person who knew what it was like to be [you]? There's a profound call to friendship and a profound call to sisterhood in that. And I think a lot of the time they had to fight incredibly hard against the male advisors around them who sought to drive them apart.”

And while we’re thankfully no longer in a world in which there’s only one position of power available to all the women who seek it, as was the case for Mary and Elizabeth, there’s a significant parallel between their struggles and ours. And it’s in this moment that Rourke momentarily drops her decorum, marveling at the fact that so much of what guided these royals still governs us now.

“It is profound, isn't it?” she muses. “To think that it has endured from that day to this day and that somehow we don't seem to have managed to work that thing out yet, and we've had an epically long time in which to do it.”

More like this
Twitter Is Identifying With Sally Field & Jane Fonda’s Friendship In New Viral Video
By Jake Viswanath
Pamela Anderson’s Dating & Marriage History Could Be Its Own TV Series
By Jake Viswanath
Owen Thiele Asked Sundance Attendees About Films That Don’t Exist
By Grace Wehniainen
Jennifer Coolidge Hunted For Jewels & Lashes In J.Lo’s Hotel Room
By Jake Viswanath
Get Even More From Bustle — Sign Up For The Newsletter
From hair trends to relationship advice, our daily newsletter has everything you need to sound like a person who’s on TikTok, even if you aren’t.