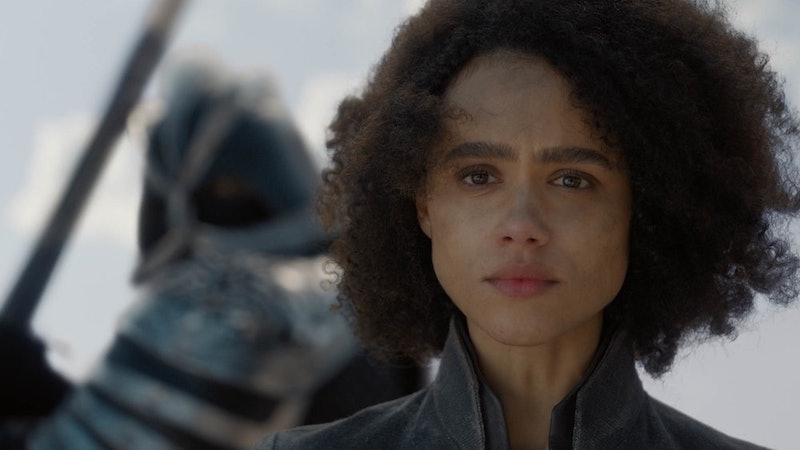 Nathalie Emmanuel is still reeling from last Sunday's episode of Game of Thrones. In last week's episode of the medieval fantasy series, titled "The Last of the Starks," fan-favorite Missandei faced a brutal death. Now, Nathalie Emmanuel is reflecting on her character's fate. After she was captured (and put in chains) by Cersei Lannister, Daenerys’ trusted adviser and closest confidant was ultimately beheaded by the Mountain. Still, in a series that routinely offs its beloved characters, Missandei’s death is still very much a deep cut as it sparked a broader conversation on representation.

In a new interview with Entertainment Weekly, Emmanuel spoke on why GoT’s lack of diversity made Missandei's death all the more brutal.

"I understand people's heartbreak because this is the conversation around representation. It's safe to say that Game of Thrones has been under criticism for their lack of representation and the truth of it is that Missandei and Grey Worm have represented so many people because there's only two of them. So this is a conversation going forward about when you're casting shows like this, that you are inclusive in your casting," she told the publication.

"I knew what it meant that she was there, I know what it means that I am existing in the spaces that I am because when I was growing up, I didn’t see people like me but it wasn’t until she was gone that I really felt what it really, truly meant until I saw the outcry and outpouring of love and outrage and upset about it, I really understood what it meant."

While Emmanuel was not surprised about her character's death, she reflected on the weight of Missandei, a former slave, dying while bound to chains. "I think the fact that she died in chains when she was a slave her whole life, that for me was a pungent cut for that character, that felt so painful. But like I said, it's the reality of the world. It kind of makes sense in a social sense, a world sense in that we're out of chains but sometimes the world makes us feel like we're not, and that is for me, even playing it when I had the shackles on, it made me quite emotional, it's hard. Just on an emotional level, I just really felt the impact of that."

Missandei first entered the series in Season 3. She served as a slave and interpreter for Kraznys mo Nakloz of Astapor, until she's ultimately freed by Daenerys. Following her liberation, she became Daenerys' closest confidant. She goes on to fall in love with Grey Worm, commander of the Unsullied. With Missandei and Grey Worm being the only major characters played by people of color in the series, Emmanuel understands the responsibility of the two roles in terms of representation.

"It's a really complex conversation and it always astounds me how much it meant to people and how much my being in that show has meant to people in terms of representation," she said. "The fact that I've been able to do that for people literally makes me want to up and cry every time someone says it to me. It's a hard one and I think the fans, what we’re learning is no one’s safe and the outcry and the rage about it, the anger about it speaks to that conversation of why representation matters. So much responsibility falls on these two characters because it’s only them but if we were more generally inclusive, that probably won’t be as prevalent."

Emmanuel's next role will be the romantic lead in Mindy Kaling's upcoming Hulu anthology series, Four Weddings and a Funeral. Given her fate in Game of Thrones, fans can rest easy knowing there will be no beheadings in her upcoming role. It's what Missandei deserves.