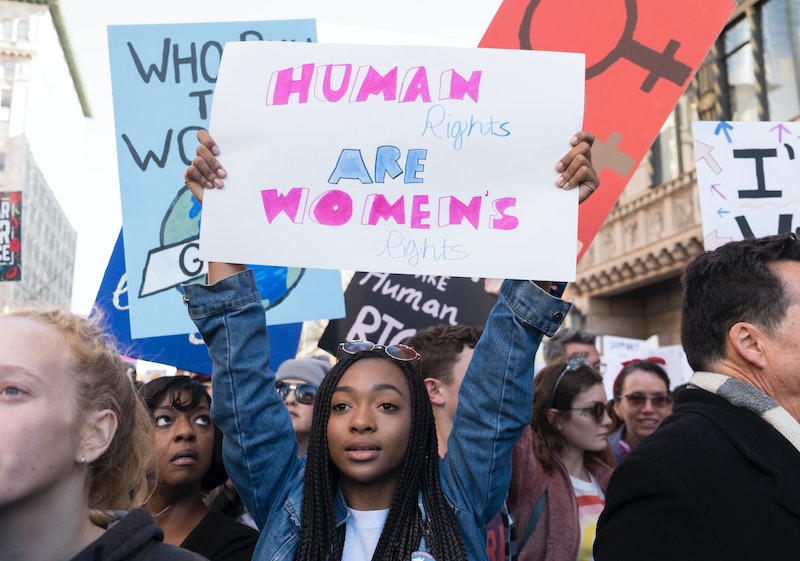 In 1976, Congress passed the Hyde Amendment, which prohibited federal Medicaid funding from being used for abortion services. Sunday marks the 42nd anniversary of this legislation, and the people of color leading Hyde Amendment repeal efforts — those who are most disproportionately impacted by its restrictions on abortion coverage— have organized events and initiatives to fight for greater reproductive health care.

Destiny Lopez, the co-director of All* Above All, a 5-year-old coalition of organizations across the country that seek to change federal policy on abortion access, tells Bustle that she has been involved in the reproductive justice movement for nearly 20 years. But Lopez initially started engaging with Hyde Amendment repeal efforts after working at an abortion fund in California and seeing firsthand how many hurdles people had to overcome to get an abortion.

According to Lopez, the late Republican Rep. Henry Hyde — the Hyde Amendment's chief sponsor — originally wanted to outlaw abortion altogether, but the only avenue he had to pursue anti-abortion legislation was through Medicaid. As a result, those who are most impacted by Hyde's restrictions on abortion access "tend to be low-income, tend to be people of color, tend to be young people," Lopez tells Bustle.

According to the Guttmacher Institute, only 17 states have policies directing Medicaid funds to pay for most — if not all — "medically necessary" abortions.

"The rest of the states don’t provide that kind of care," Lopez tells Bustle, "and so there are whole swabs of the country where folks who are enrolled in Medicaid can’t access abortion care."

Yamani Hernandez, the executive director of the National Network of Abortion Funds, tells Bustle that Hyde primarily targets people without "generational wealth," such as people of color and immigrants who have had to contend with racial and economic injustice. Hernandez says that abortion funds were created in large part as a response to the Hyde Amendment, in order to provide people on Medicaid with the financial means to get an abortion. But this doesn't just mean paying for the abortion — it also means arranging for transportation to and from the appointment and finding a place to stay.

"Just the right to abortion is not enough," Hernandez says. "If you can’t afford to access it, if there’s stigma around accessing it, all of those things impact your legal right."

Abortion funds are not the only ongoing initiatives to combat the Hyde Amendment. According to All* Above All, there will be actions throughout the last weekend of September to oppose the Hyde Amendment in 20 states and the District of Columbia, pegged to the 42nd anniversary of the amendment's passage.

In Atlanta, Georgia, for example, All* Above All tells Bustle that the National Asian Pacific American Women's Forum and Unite for Reproductive Equity (URGE) have partnered up to host a nighttime “glow ride” around the city, during which women and LGBTQ people of color — alongside local bike collectives — will use art to educate area residents about the Hyde Amendment. In North Carolina, meanwhile, NARAL Pro-Choice America plans to host a teach-in at HBCU Women's College.

On the federal level, progressive lawmakers have been pushing the EACH Woman Act, which would implement two main standards: Firstly, it would ensure that pregnant people whose health insurance is provided by the federal government will be covered for abortion and all other pregnancy-related health services. Secondly, it would ensure that private health insurers would not face political interference if they decide to provide abortion coverage. According to Lopez, this piece of legislation has been introduced twice in the House of Representatives, and has been spearheaded by the "newest generation in Congress" — namely, people of color and young people.

Across the country, these are the people primarily leading and coordinating campaigns to combat and ultimately repeal the Hyde Amendment. These campaigns are not just tied to the amendment's 42nd anniversary; they have also been going on for years. Lopez says that All* Above All, for instance, makes an active effort to "center the voices and the leadership of the folks most impacted by the Hyde Amendment," and that this effort is reflected in the coalition's events and campaigns.

"As women of color, as young people, we really know what it’s like to resist against tough odds and we’ve taken this on as part of our struggle for justice," Lopez says.

Efforts like the EACH Woman Act make both Lopez and Hernandez optimistic for the future of reproductive freedom in this country, despite the hostile political climate. For Hernandez, the EACH Woman Act is proof that pro-choice activists "have a lot of champions on our side." Lopez, meanwhile, is hopeful that the uptick in movements to repeal the Hyde Amendment and other conservative policies signals that activists are turning "the tide on 40 years of inaction."

"We’ve already overcome so many hurdles," Lopez tells Bustle. "As folks of color and as young folks and immigrant folks who are part of our campaign, the tactics of this administration are not new to us — the racism, the xenophobia, the anti-women stances. We have faced all of that for generations, we are used to that, and we know what it’s like to resist against that. And ultimately, we believe we will be victorious."

Correction: A previous version of this story mischaracterized Yamani Hernandez's role at the National Network of Abortion Funds. It has been updated to accurately reflect her position.