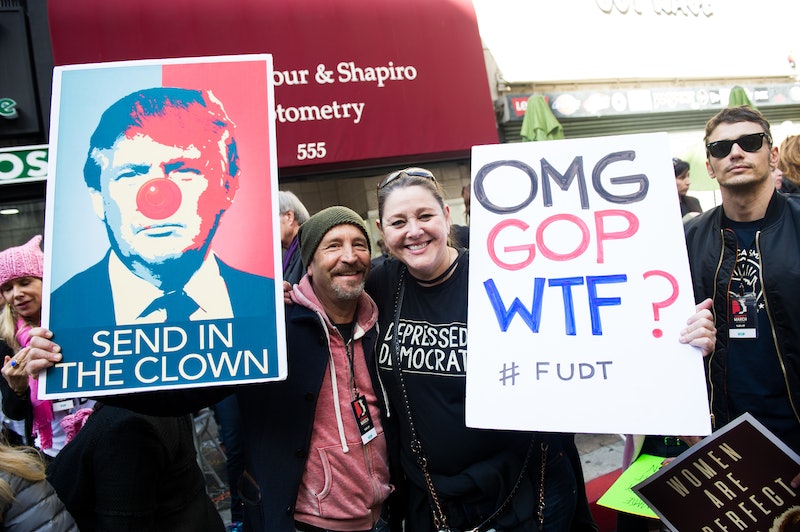 The Trump administration is less than a week old, and you're probably already getting tired of people telling you to call Congress. Using the phone sucks, right? But hang with me for just a minute, because right now is exactly the time to call Congress and tell them that HR-7 absolutely cannot become a law.

On Tuesday, the No Taxpayer Funding for Abortion and Abortion Insurance Full Disclosure Act of 2017, or HR-7, made its way through the House of Representatives. HR-7 would essentially legalize discrimination, because it wouldn't allow government-funded insurance policies to cover abortion. That means that women who get their insurance through the government in any way, whether that means their jobs in the military or their Medicaid, would not be able to use their insurance policies to pay for an abortion.

It doesn't even stop there. Women who get insurance through the Affordable Care Act would also have a hard time finding an insurance policy that would cover abortions, because they wouldn't be able to use government subsidies to pay for that plan. And if no one's going to buy those plans, why would the private insurers even offer them? If you're thinking that they wouldn't, then you're exactly right.

This bill targets the most vulnerable women — low-income women, women of color, and millennials, just to name a few — and that is the main reason why it absolutely cannot be allowed to become a law.

Luckily, there's still a legislative body in between HR-7 and President Trump's desk. The Senate could still stop HR-7, and they have a decent chance at doing it. The Democrats will filibuster it, so it'll need 60 votes to pass, and there are only 52 Republicans in the Senate. In order for it to pass, some Democrats would need to cross party lines — which happened in the House, where three Democrats voted for HR-7. This is exactly why you need to call your senators now, whether they are Democrats or Republicans. Either way, they need to know that you, their constituent, want them to stand strong in favor of women's rights.

This is why the democratic process has to have so many steps, and why everyone should have paid attention in civics class. This bill is already making a ton of headlines, but supporters of a woman's right to choose still have a very good chance of stopping it. And if you want your senator to act on your — and all women's — behalf, then they need to know that you're supporting them in that decision. Don't wait any longer — call your senator now.