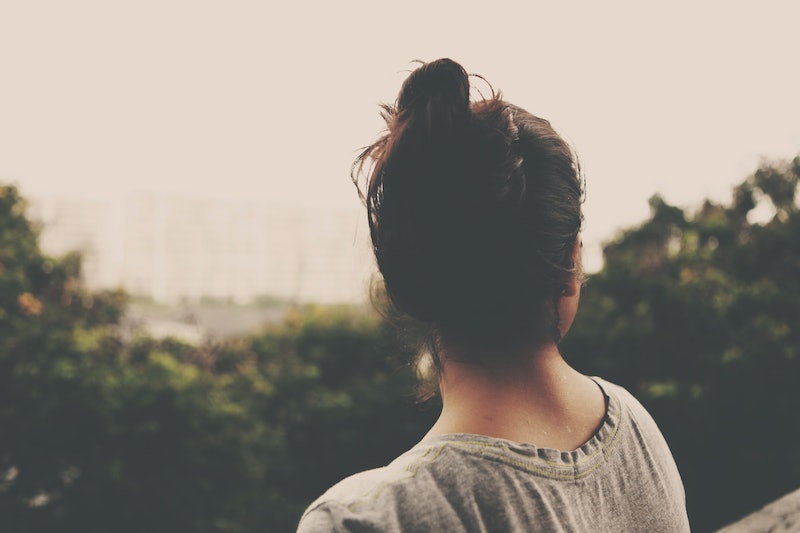 I don't know about you, but after I left the nest, it took about two weeks for me to realize that taking care of myself was a bit more complicated than expected. Self-care is often associated with early bedtimes and bubble baths, but as illustrator Hannah Daisy's recent series, #BoringSelfCare on Instagram, points out, it's not always about relaxation. To put it simply, sometimes self-care is just plain boring.

While being on your own can be freeing, it also means you're, well, on your own. It's up to you to take your medication on time, wash the dishes before a sentient mold colony takes hold of the kitchen sink, and other less-than-sexy chores. Although they're not always fun, these activities are an integral part of self-care — and now, they're getting some time in the spotlight. In a series of Instagram posts, Daisy has illustrated the daily ways we take care of ourselves, from unfollowing negative Instagram posts to simply surviving your period.

As a mental health occupational therapist (and mental health activist), Daisy has a broader definition of self-care than what's typically discussed online. While it certainly includes luxuries like massages and sleeping in on the weekends, she told the Huffington Post that such a narrow focus may alienate those who struggle to complete more everyday tasks.

That's where her series comes in. Each post, tagged with #BoringSelfCare, resembles a badge celebrating small accomplishments.

For those struggling with mental illness, taking care of oneself can become a monumental task. Daisy's series recognizes the strength and dedication it can take to remember to eat, take a shower, or even just go outside.

The concept of self-care has existed for quite some time. Beginning as an act of political resistance, it's only recently that the idea became mainstream, so to speak. It's often associated with the millennial generation, but as Slate pointed out this spring, the results of the 2016 election appears to be connected to an overall rise in popularity. Following the election, social media was flooded with reminders to take care of yourself however possible. For some people, that means rounding up their friends for a spa day. For others, self-care is as simple as remembering to pick up their medication from the pharmacy.

Daisy told The Mighty that #BoringSelfCare has been well-received online, with hundreds of likes left on most posts. It must be said that even for someone who isn't struggling, the series is absolutely validating. What can I say? Being an adult is tedious sometimes.

To check out the rest of the illustrations or view Daisy's other work, head over to her Instagram account. Trust me — despite its subject matter, the series is anything but boring.

More like this
Wondermind Just Launched A Site That's All About Supporting Mental Health
By Carolyn Steber
15 Halloween Costumes Inspired By TikTok Trends
By Emma Carey
Why TikTok Is Obsessed With Caesar Salads Right Now
By Alexis Morillo
Behind The Hilarity Of The "POV: You Walk Into My Room" TikTok Trend
By Lexi Inks
Get Even More From Bustle — Sign Up For The Newsletter