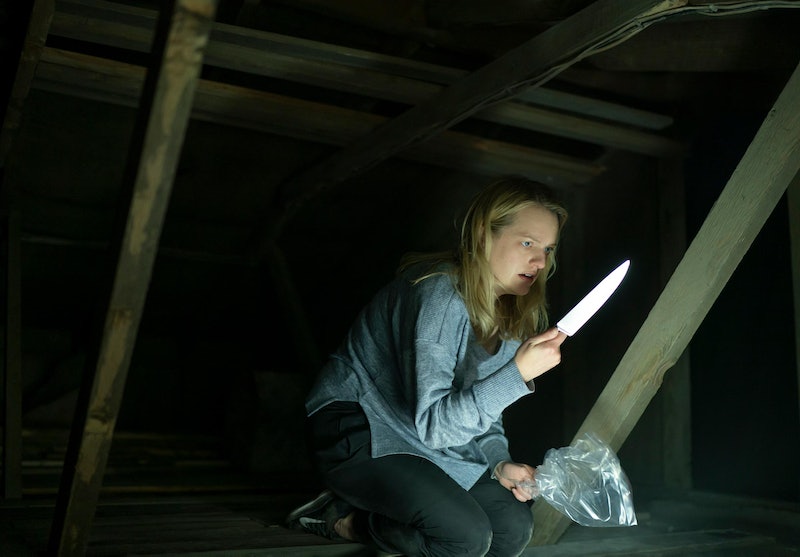 Classic novels can make for great films. But what if an old, beloved book is changed a lot? The new version of The Invisible Man is so different from H.G. Wells' original novel, that you might not even recognize it as the classic story. How The Invisible Man the book ended is in a whole different world than where this new film even begins.

The Invisible Man opens in theaters on Feb. 28 and stars Elisabeth Moss as a woman named Cecilia who is in an abusive relationship with a brilliant scientist named Adrian Griffin (Oliver Jackson-Cohen). Cecilia manages to escape Adrian with the help of her sister (Harriet Dyer), their childhood friend (Aldis Hodge) and his teenage daughter (Storm Reid). But when Adrian allegedly kills himself and leaves his fortune to Cecilia, strange things begin happening that lead Cecilia to believe that Adrian faked his own death, and is actually tormenting her as an invisible man.

The original science fiction novel The Invisible Man, written by H.G. Wells, was published in 1897 and doesn't even have a character named Cecilia in it. The main character of the book is the invisible man himself, a scientist named Griffin. The book opens with the mysterious Griffin arriving at a secluded English town where he takes up residence at an inn. He wears bandages to cover his face, and dresses in many layers of clothing, but initially tries to keep to himself. Soon, however, a burglary occurs and the townsfolk start whispering. When his landlady confronts Griffin about late rent, Griffin turns violent, reveals himself as being invisible, and flees the scene with the angry townspeople at his heels. It's then that the invisible man commits his first murder.

Griffin, it is revealed, is a brilliant scientist and former medical student who had been experimenting with optics. He tells an acquaintance how he had invented chemicals that made human flesh invisible, but could not figure out how to undo the process. Griffin, driven mad by his invisibility, vows to go on a "Reign of Terror," murdering the townsfolk and former friends who have turned on him. But in the end, the mob beats him to death, his body becoming more and more visible as he dies, calling out for mercy. The 1933 movie changes that a bit, however, with Griffin dying peacefully in a hospital. But the image of a dead invisible man coming back into view is a haunting one.

Ultimately, the reader is meant to feel bad for Griffin. He is the protagonist in Wells' novel, after all, and his death at the hands of a mob is meant to be tragic rather than triumphant. Griffin, according to Wells, is a misunderstood hero. But that's exactly what 2020's The Invisible Man writer and director Leigh Whannell wanted to change.

As he recounts the tale to IGN, Whannell was in a meeting about the idea of a new movie version of the story when, "One of the guys that I was meeting with was saying, 'Well, you know, these movies are hard to write. I mean, if the Invisible Man is the good guy, who's the bad guy? What scares the Invisible Man?' And I said, 'He's not the good guy, he's the bad guy.' And they all said, 'Go on.' ...And the more I thought about it the more intrigued I was, thinking about what the Invisible Man could be. I landed on the story and kind of reverse-engineered it into a concept rather than a story appearing fully formed."

That concept turned out to be an incredibly smart critique of gaslighting, the abusive tactic used to make people think that they're crazy. "It was this idea that no one will believe you that this person is coming after you," Whannell told The Sydney Morning Herald. "The idea of an invisible man playing games with someone, torturing them, wrapped perfectly around the idea of a toxic relationship, somebody trying to escape from someone who was gaslighting them and emotionally abusing them. It was a good metaphor. The script wanted to go in that direction, so I had to follow it."