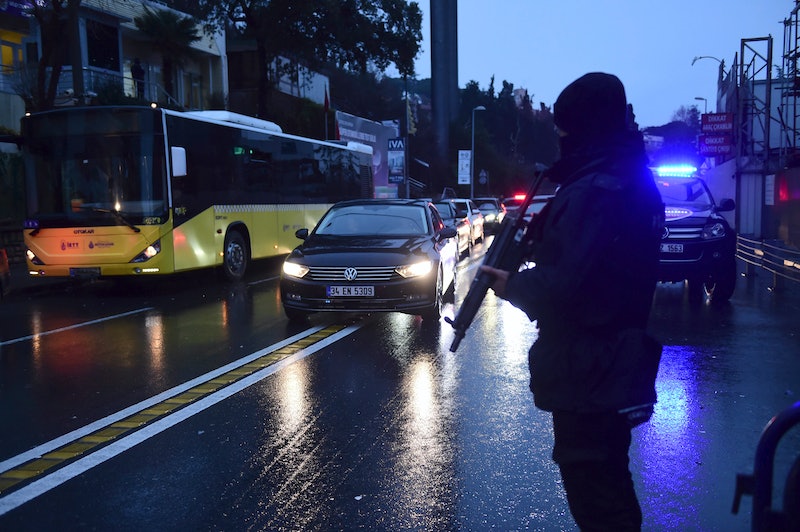 Early Sunday morning, a gunman reportedly opened fire at a popular, upscale nightclub in Istanbul, Turkey, killing at least 39 people. As Turks and foreigners celebrated the start of a new year together in Turkey's capital city, the Istanbul nightclub shooting brought terror to yet another crowded, public place. It caused a scene that has become far too familiar around the world, but that familiarity shouldn't cause the attack to be overlooked.

According to The New York Times, the attack occurred around 1:15 a.m. local time, while some 600 people were in the busy Reina nightclub, which is known for hosting famous clientele. Nearly 40 people were killed, and 69 individuals were hospitalized. Many of the deceased victims were not Turkish, as the club is popular among foreigners.

Horrible as it is, news of the incident should sound familiar to you. It could remind you of any number of recent incidents, including the alleged attack on a German Christmas market shortly before the Christmas holiday, or the bombings that occurred at a Brussels airport and metro station in March. Perhaps most fitting, it could remind you of the shooting at the Pulse nightclub in Orlando back in June, when a gunman reportedly killed 49 people. As the worst mass shooting in U.S. history, the Orlando incident won't soon be forgotten — particularly not when similar attacks continue to occur regularly around the world.

It may still be too early to tell the motivation behind Sunday's attack on the other side of the globe from Orlando. Surely, the Istanbul community and the communities of the foreign victims will mourn for weeks to come. But what Sunday's attack in Turkey should teach us is that it's not enough to take things one attack at a time. It's no longer just about Orlando, or Brussels, or Berlin, or Istanbul. The borders between countries and the oceans between continents mean nothing to the spread of violence.

So often when attacks of this nature occur, news headlines, investigations, and conversations centralize on the cause. Was the assailant radicalized? Was he or she mentally ill? A disgruntled employee? An outcast? Was the attack part of a larger plan or a standalone incident?

But the one thing that unites all of the aforementioned attacks is the use of violence in a large, crowded, public place. The Orlando attack targeted an LGBT nightclub. The Istanbul attack targeted an upscale nightclub. The Brussels and Berlin attacks targeted central locations in broad daylight. The motivations may differ, but the use of violence in a public place remains the same.

It seems not a holiday — or a month, for that matter — goes by that I'm not writing about some act of terror. While I'm writing, there are dozens of people around the world at the scene of the incident actually facing the facts of a violence-prone global society. Each incident is a painful reminder that something must be done to prevent the violence.

According to the New York Times editorial board, the European Union has taken steps to reduce gun violence within its member countries. Its proposed measures include wider bans on assault rifles and increased medical checks for individuals who seek to purchase weapons. The U.S., meanwhile, has remained relatively quiet. It's well past time for leaders around the world to make policy changes, and it's time for everyday citizens to call for that change.

There are plenty of ways to support the victims of Sunday's attack in Istanbul, including donating to a relief organization and raising awareness on social media. As the new year begins, it's painfully obvious that public acts of violence and terror will have their place in 2017. But the new year also presents an opportunity for new policies and much-needed change to the violent mentality that runs through the international community.