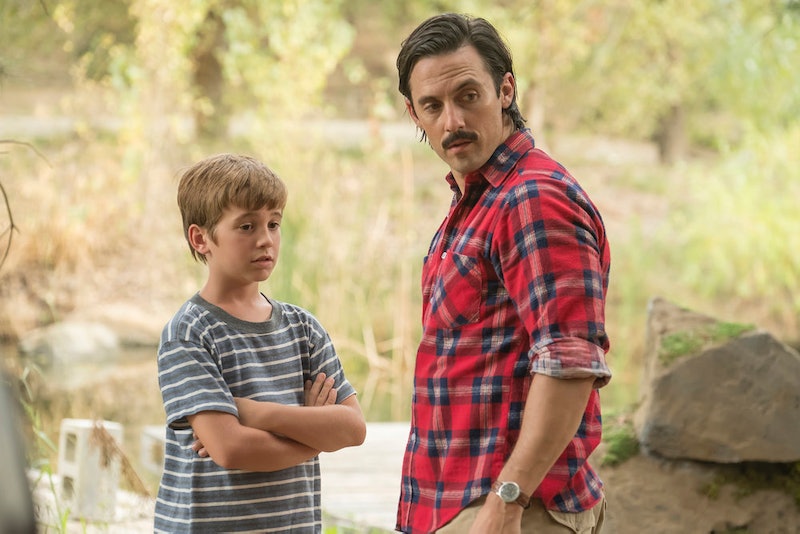 The tipping point of This Is Us was not when viewers found out in the pilot that the show was actually taking place in two planes of time — instead, it was when viewers found out that Jack Pearson was alive in the past and dead in the present. The creator and cast have stayed pretty mum about Jack’s fate, and the Season 2 premiere hinted that Jack may have died in a house fire. But that house fire is probably simple misdirection, and This Is Us fans shouldn’t consider the fire theory as the only one for how Jack dies.

In the Season 2 premiere, a flashback set the scene for Jack’s supposed death — Kate, holding a dog (where did that dog come from?), crying; Randall, being comforted by a redhead (who is that redhead?); and Kevin, with a broken leg, making out with Sophie somewhere that was not with his siblings. Rebecca, wearing a Pittsburgh Steelers shirt, drives with a bag on the front seat of her car. The bag is full of Jack’s personal effects, including his watch and ring and some paperwork. As she pulls up to the still-smoldering remains of what used to be the Pearson house, Rebecca lets out a guttural scream, and… scene.

That would make you think that Jack perished in the blaze, right? There are two big indications here, though, that he didn’t. The first is that Jack’s stuff, which is sitting on the front seat of Rebecca’s car, is not burned. It’s in perfect shape, not in embers, which led me (and many other viewers) to believe that Jack couldn’t have died in the fire because the stuff he kept on his person wasn’t affected by flames. Another indication that Jack didn’t die when the fire happened was Kevin’s leg — it’s in a cast when the fire happens, and during Jack’s funeral, he has no cast on. That means that somewhere between the fire and the funeral, Kevin’s leg healed, and it’s a stretch to think his leg was healed coincidentally the same time Jack died. He probably wouldn’t have stopped his father’s funeral to get his cast taken off. These are just theories, but they do make sense in shaping the argument that Jack did not die in the house fire.

Viewers shouldn’t put so much weight into Jack dying in a fire on This Is Us because the pilot episode of This Is Us showed that this was going to be an hour-long drama unlike any hour-long drama we’ve seen before. The pilot is based around the assumption that viewers will think Rebecca and Jack’s storyline is happening concurrently with the rest of it, and then boom — the big reveal happens and Jack and Rebecca are the parents and it's 1980. When watching This Is Us, viewers should expect the unexpected, and what’s not expected is the writing staff spelling out how Jack finally died on such simple terms. It’s too anti-climactic for a show that’s a tapestry of tightly woven happenstances and consequences. Nothing on This Is Us is random.

Creator Dan Fogelman said as much during a recent panel event, per Vanity Fair. “We had talked about the fire and what happened from Day 1 of starting,” he said. “This has always been the plan. You’re seeing a lot of things that are going to reveal themselves over the course of the season.” At least there is a plan, right, dear viewers? “The writers have sat and analyzed every bit of minutiae. A lot of the little things are going to come into play over the course of this season,” Fogelman continued. “All the answers about how Jack died, it’s all going to happen this season.”

If that’s not a “yes-but-no” response, I’ve never heard one. Fogelman is basically saying that there is more reveal to come in Season 2, so it’s probably safe to say that Jack did not die in the fire — the This Is Us writers and producers are just priming viewers for the rest of the mystery of Jack’s tragic death.