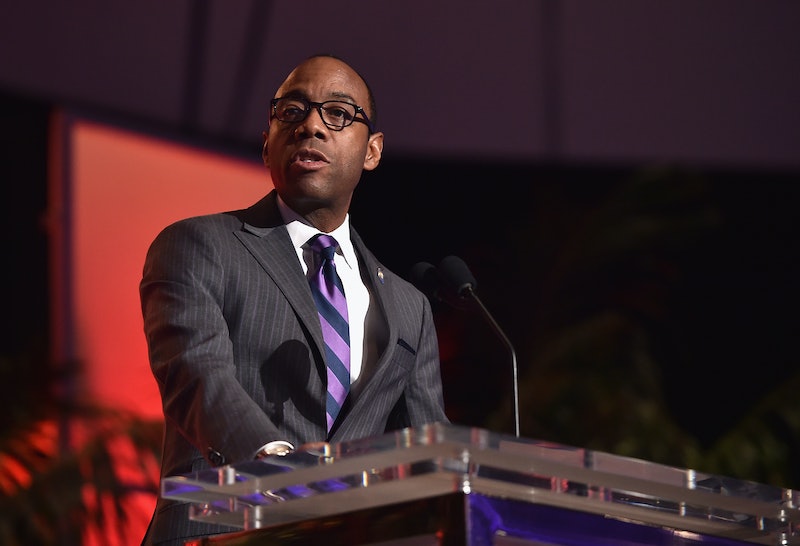 In the parlance of the 1950s and 60s civil rights and anti-war protests, a sit-in was one of the most commonly used forms of non-violent protest. Today, this type of protest is mistaken as being quaint in a retro, idealistic sort of way. But that couldn't be further from the case. On Tuesday, the NAACP took a page out of the civil rights era's playbook when they staged a sit-in at Sen. Jeff Session's Mobile, AL office to protest his attorney general nomination by Donald Trump. In an inspiring way, the NAACP's Sessions sit-in harks back to the golden age of American activism, and younger protesters could learn a thing or two from this tried-and-true method.

In the classic spirit of civil disobedience, NAACP president and CEO Cornell William Brooks said group members who staged the protest would not leave until Sessions had stepped down, or until they were arrested. The latter proved to be true, as multiple NAACP members, including Brooks, were arrested, effectively ending the protest. The sort of bravery that results in a willingness and readiness for arrest has always been a cornerstone of civil disobedience, and everyone from Rosa Parks to former presidential candidate Bernie Sanders have been arrested during protests.

Until last year, sit-ins, which were part of the foundation of the civil rights movement, weren't commonly staged, and were even less commonly covered by major news outlets. That changed dramatically last summer when members of Congress, led by Rep. John Lewis, a civil rights leader himself, staged a sit-in at the House of Representatives to protest in favor of stricter gun control. The sensational protest that lasted for more than a full day was covered around-the-clock, and brought the famous tactic that helped bring an end to segregation into the modern era.

In many ways, the differences between sit-ins and direct action or street protests are representative of the differences between the waves and ideologies of activists in the civil rights era versus today. Millennials often seem desperate to achieve a larger and more critical mass than sit-ins within government offices allow. Furthermore, the lack of visibility in such confines seems counter-intuitive to the social media-minded activists who lead modern movements. It's easy for us to forget just how significant sit-ins were because they last much longer, incur more boredom, and lack the glamour (and photo ops) of street protests. The stakes might be much different in 2017 than they were in the 50s, but they're still high.