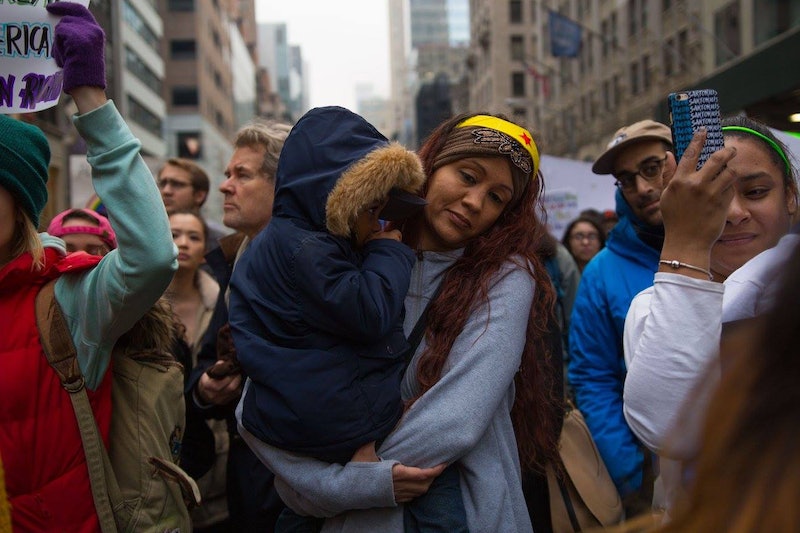 There's a lot going on in politics these days, and it can be hard to figure out what to focus on. If you believe in reproductive rights though, you should definitely know about the "Sanctity of Human Life Act." In actuality, this personhood bill isn't about protecting human life as much as it is about taking away a woman's right to her body. Under the personhood bill, the fetus' life would essentially be considered more important than that of the mother.

Introduced by 23 House Republicans including Georgia Rep. Jody Hice, HR 586 would have personhood begin with fertilization. This means the personhood bill would criminalize abortion, but it could also ban several forms of contraception and impact in vitro fertilization, since discarding an embryo would be seen as killing a person. But even more chillingly, the bill doesn't provide exceptions for rape, incest, or even the pregnant person's safety.

The personhood bill's conditions remind me of the tragic case of Savita Halappanavar, a woman who was refused an abortion due to Ireland's anti-abortion laws. Halappanavar was forced to go through with a pregnancy that ended with neither her nor the fetus surviving.

The thing about being concerned about the "sanctity of life" is that you can't just stop caring what happens to people after they're born. (Well, you can, but that's extremely hypocritical.) Without even going into the ethics of arguments for reproductive rights, pregnancy and child-birth can be very dangerous, especially if there are complications along the way. Forcing women to carry their pregnancies to term in such dangerous situations not only disrespects the sanctity of the mothers' own lives, but also prioritizes the fetuses in their wombs over them.

Furthermore, legislation such as the personhood bill would surely never achieve its goal of eliminating abortion. A comprehensive study by the World Health Organization and the Guttmacher Institute found that abortion rates are pretty similar between countries where the procedure is legal and countries where it is outlawed, the New York Times reported. Despite the procedure being illegal in Ethiopia, abortion is the second largest reason women admitted to hospitals in the country die, according to its health ministry.

It's pretty clear that abortions are going to keep happening, whether the personhood bill passes or not. The question is, are lawmakers going to allow them to happen in a safe environment? Right now, it looks as though the answer is no.

This isn't the first time a bill like HR 586 has been introduced — not by a long-shot. But the timing of the personhood bill is unfortunate, especially considering the Senate voted 51 to 48 to begin the process of repealing the Affordable Care Act. The Senate vote was a blow to reproductive rights for many reasons; it basically paved the way to get rid of Obamacare's contraceptive coverage and the maternity care provision. On top of that, if the ACA is repealed, insurance providers may once again be able to reject people with pre-existing conditions — and pregnancy is often considered one. This is just one more way women will be disproportionately affected.

Rather than forcing women to have illegal abortions, or carry unviable pregnancies to term, it would be better if congresspeople like Hice came at the issue of "protecting life" from a different angle — maybe one that includes making sure women get the birth control they need to prevent unwanted pregnancies in the first place. And what would be even better, of course, is if congresspeople accepted the fact that women need access to safe, affordable abortions.