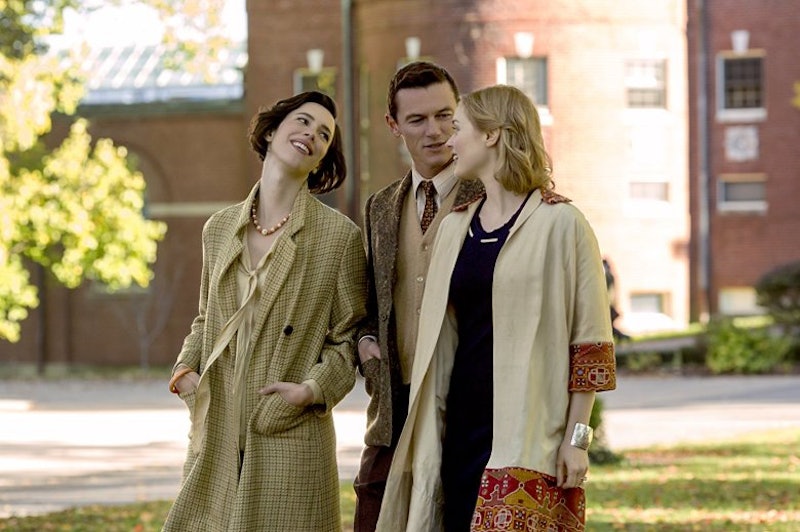 When Patty Jenkins' Wonder Woman hit theaters in June, it exceeded expectations on every level — that is, if you were one of the skeptics who believed that a movie about the most female superhero in comics wouldn't be a massive success. For countless others who'd looked up to the hero all their lives, though, it's not a surprise at all that Wonder Woman was a hit, only that it took so long for the film to actually be made. After all, the character existed for over 75 years before she got her own titular movie. It's a baffling fact that actor Rebecca Hall — who stars in Professor Marston And The Wonder Women, a new film about the inception of Wonder Woman — believes is simply connected to society's acceptance (or lack thereof) of gender equality.

"You can look at every Wonder Woman incarnation, you can look at Wonder Woman throughout the 20th century from the beginning right to where we are now, and you can map onto it the history of feminism," explains Hall, sitting down at New York's Langham Place hotel on a sunny October day. "There's a correlation [between] how willing we are to accept" feminism as an idea, the actor continues, and how we try to "pigeonhole" women, with society saying, "'you can only be a feminist like this,' 'you can only be a feminist like that.'"

"I just think it’s fascinating how it regressed after the initial blatant bondage, whipping, slapping, dominating, in the early comics," Evans says of the character's depiction. "And how then it was slowly molded into something that was more accessible and comfortable for the American public to deal with. And then how it evolved again and again to what we have now."

What we have now is the powerful, feminist hero embodied by Gal Gadot in the summer's blockbuster hit, but she wouldn't exist without the contributions of William, Elizabeth (Hall) and Olive (Heathcoate). Although William, a Harvard professor of psychology, came up with the character, his wife Elizabeth and lover Olive both contributed heavily to her appearance and personality; the hero sported Elizabeth's intelligence and ferocity, as well as Olive's innocence and loving nature. Yet while Wonder Woman was initially well-received, the trio's romantic relationship unfairly drew controversy and stole attention away from the hero. "They tried to live a very normal life, and it was only because of the outside influences and opinions and society having an impact on them that caused them any grief," explains Evans.

Professor Marston's depiction of the trio's relationship is moving, but more importantly, it's essential. Polyamory is rarely shown on-screen, and when it is, it's typically "seedy or dark," as Heathcoate says. This film, however, portrays William, Elizabeth, and Olive's romance as unusual, yes, but not unnatural. And when it comes to gender dynamics, Marston is similarly progressive. Elizabeth and Olive are complicated, fully-realized women, while William is a male feminist severely ahead of his time.

"It’s a quiet masculinity, that he has, because he doesn’t need to be the man of the house. He didn’t need that to validate him as a man, or the father of the children, or the breadwinner," says Evans. "He wanted everyone in his life who he loved, i.e. these two women, to feel that they were fully understanding who they were."

The fact that the film was written and directed by a woman, Angela Robinson, certainly has something to do with that complexity. "I think it’s sort of imperative that this film was made by a woman," says Hall. "She makes it with the female gaze. It’s not the male gaze."

And that matters tremendously, she adds, "when it comes to exploring female eroticism and female sexuality and showing the emotional life behind that, and not falling into any traps of showing it as fantasy. It’s not objectified." Heathcoate agrees, recalling, "I probably breathed a sigh of relief as I was walking onto her set. And I know that I felt safe throughout the whole process."

That comfort level undoubtedly contributed to the naturalness of the cast's performances in a film that Hall rightfully describes as "hopeful and sex positive and exciting and empowering and thrilling." It may have taken far too long for Wonder Woman herself to hit the big screen, but between Jenkins' blockbuster and Professor Marston, she's finally getting her due.