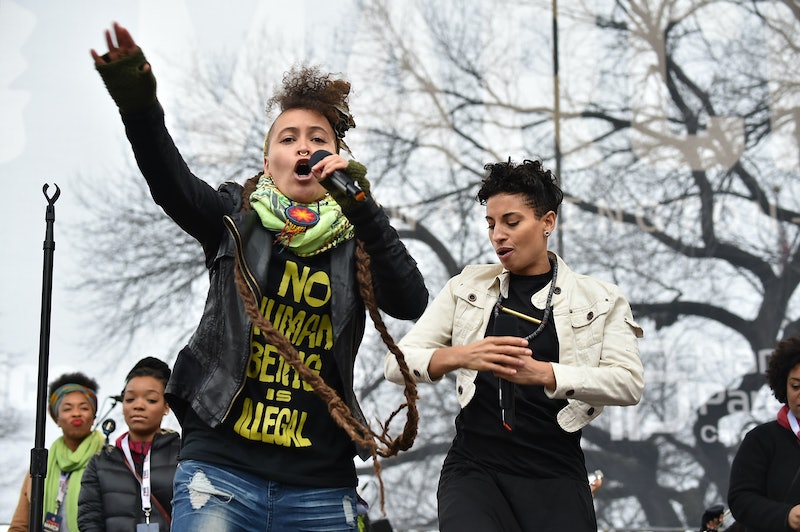 The newly inaugurated President Donald Trump has managed to fit a lot into his first couple of days in office, but making a comprehensive response to the Women's March has most certainly not been one of his completed tasks. Instead, Trump dismissed the Women's March as "protests" in not one but two tweets. Some response, from the new president of a country to the millions of people who took part in a march — and the beginning of a movement — against him.

This is in keeping with his record of underemphasizing things that are inconvenient to him — think his tax returns, for example, or his lack of respect for women. With his refusal to try to reach out to the marchers, though, Trump is putting himself in an interesting situation. In his first tweet on the subject, he attempted to be tongue-in-cheek, asking why the marchers people didn't vote. Something he surely knows but refuses to talk openly about is the fact that he lost the popular vote — by 2.9 million votes, almost the number of people who marched. More people in the country supported the other candidate, and then some of those people came out to express their fears about having him as the president. Numerically speaking, this gives him a pretty weak mandate — and yet he's doing nothing to build up support among those who oppose him.

The president of the U.S. is now willfully ignoring the majority of the country. The people who took part in the Women's Marches across the country and the globe are just a small segment of the people who didn't vote for him, but they're the people who feel strongly enough to come out and express themselves in public. Wouldn't you expect that the new president would want to ease those people's fears? If there are that many people demonstrating against you, wouldn't you want to prove them wrong, to try to bring some of them to your side?

Of course, Trump is doing no such thing. Instead, he's minimizing the marches and their impact — a tried and true dictatorial strategy.

What Trump perhaps doesn't realize is that the Women's March wasn't just a protest. The Women's March was millions of people getting together to start something, and instead of just dissipating now that the new administration has begun, they're gathering their strength and diving right into the real work.

Trump is choosing to ignore this broad swath of the country that elected him. What he doesn't seem to realize — as no dictator ever seems to do — is that he's doing it at his own peril.