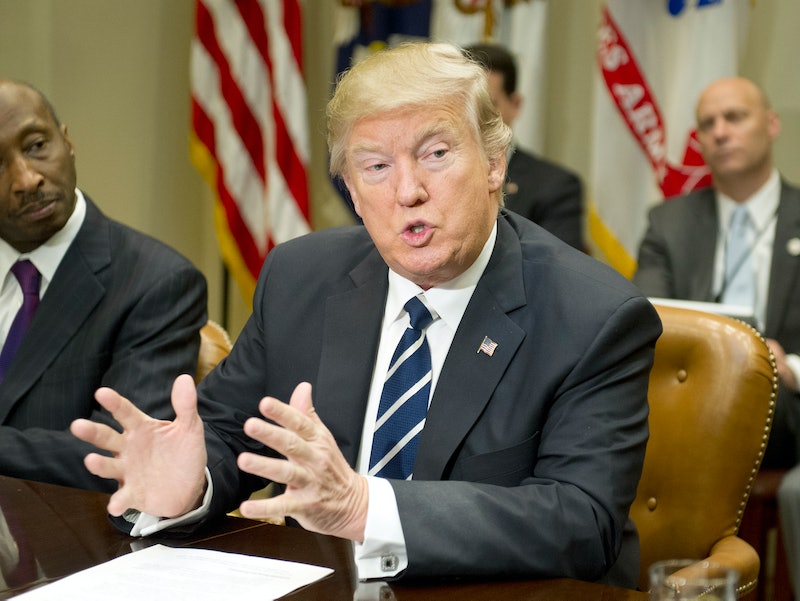 As more and more controversy swirls and ink is spilled around Donald Trump's executive order on immigration, there's a Medium post making the rounds on the internet. The post, written by Jake Fuentes, an executive at Capitol One, makes the case that Trump's executive order, and the chaos around it, are intentionally orchestrated by Steve Bannon and others within the Trump administration. In the piece, "The Immigration Ban is a Headfake, and We’re Falling For It," Fuentes claims that they are doing so in an attempt to use the pandemonium to consolidate power, distract from other actions, and, once the most egregious parts of it (stopping green card holders, citizens of American allies, and U.S. citizens from entering) are stopped, leave in place an order that still bans refugees and visa admittance from these countries.

The logic goes like this: The administration is testing how far they can push the system of checks and balances by seeing what kind of overreach they can get away with, keeping track of which people in the government (like Customs and Border Patrol) they can count on, and which they can't (for example, Sally Yates, the former acting attorney general). "The administration is deliberately testing the limits of governmental checks and balances to set up a self-serving, dangerous consolidation of power," Fuentes wrote. Trump and his advisers are simultaneously making moves behind the scenes, such as rearranging the National Security Council to remove the normal military and intelligence officials and replace them with Bannon. And they are desensitizing the country to marches and protests over an issue they can easily back down on while still achieving 80 percent of their goals.

This is not the only piece like this floating around. Yonatan Zunger, an engineer on the privacy team at Google, published his own Medium piece the day before, entitled "Trial Balloon For A Coup," focusing on how the Trump administration seems to be using this chaos to consolidate power as well as engage in some kleptocratic tendencies. David Frum, a former speechwriter for President George W. Bush, published his version of Trump's authoritarian playbook in The Atlantic.

It's understandable that many who oppose Trump see the events of the past weekend as something even more sinister than what they seem to be. Throughout the presidential campaign, Trump kept doing things that seemed crazy — announcing a Muslim ban, bringing Bill Clinton's accusers to the debate, asking Russia to hack Hillary Clinton's emails — and kept rebounding. As we all well know, he even won the election despite them. It's obvious that many Democrats and other Trump opponents assume he must be planning everything as part of an elaborate game — if only so that they don't feel stupid for losing to him.

But there's another post floating around offering a more sober point. Tom Pepinsky, a government professor at Cornell, published a post on his blog titled "Weak And Incompetent Leaders Act Like Strong Leaders." Trump's actions look just like the actions of a leader without many institutional followers and lacking in popular support — alienating Congressional allies by shutting them out, energizing a mobilized and uniform opposition, getting in legal trouble, and elevating one the few true loyalists in a government that includes many voices of dissent.

This is not to say that Bannon isn't thinking with an eye toward some Machiavellian consolidation of power — I have no idea how the man thinks. But the way that Trump's inner circle is burning bridges so early suggests they're in for a tough few years.

Trump's winning strategy in the campaign wasn't eight-dimensional chess. He doesn't play chess — and when his opponents played chess, he got up and punched them in the nose. It was an effective strategy. And it's also the strategy that he seems to be trying here.

If people are worried about Trump, they should focus on what he's actually doing.